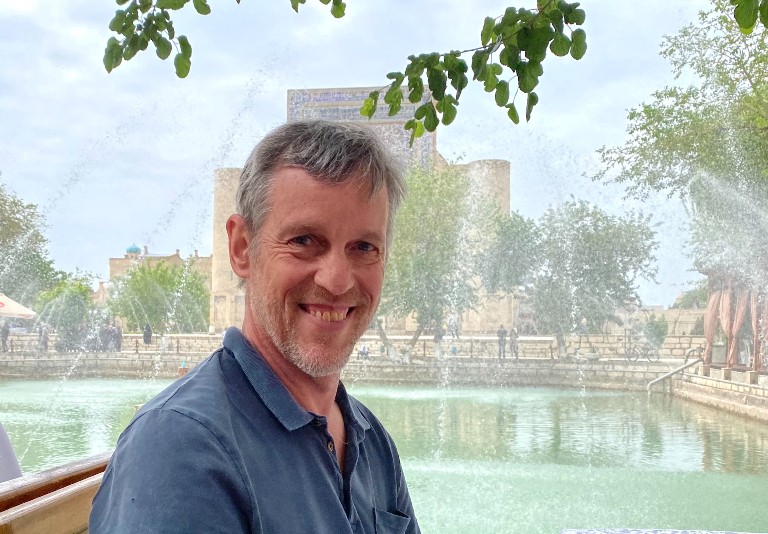 Richard Foltz in Bukhara, Uzbekistan: “For the last four years, I’ve been looking at two Iranian-speaking peoples at both extremes of the Iranian world.”

You could never accuse Richard Foltz, professor in the Department of Religions and Cultures in Concordia’s Faculty of Arts and Science, of being timid in pursuing his research.

A specialist on Iranian civilization, Foltz has explored many of the lesser-known corners of post-Soviet Union Central Asia, from the Caucasus in the west to China’s Xinjiang region in the east.

A recent research trip to North and South Ossetia in the central Caucasus region didn’t quite go as planned.

“I spent the first months of the pandemic living in Ossetia and dealing with what’s happening in Russia — until the Russian security services decided I was a NATO spy and kicked me out of the country,” he reports. “I was supposed to spend a year and a half in Ossetia, but I was chased out after seven months, in conditions almost identical to those portrayed in the last scene of the film Argo!”

The trip nonetheless gave him the chance to make three visits to South Ossetia, a functionally independent but mostly unrecognized country which most of the world considers to be part of Georgia.

Foltz’s latest book, The Ossetes: Modern-Day Scythians of the Caucasus, was published in late 2021 by Bloomsbury Press, the first book on the subject to appear in any Western language. That was also true of his previous book, A History of the Tajiks: Iranians of the East, from 2019.

“For the last four years, I’ve been looking at two Iranian-speaking peoples in both extremes of the Iranian world,” Foltz says.

“In the east you have the Tajiks, who live in Tajikistan, Uzbekistan, Afghanistan and also Xinjiang in western China. The western edge includes groups like the Kurds in Turkey, and the Ossetes in the Caucasus,” he explains.

“The Ossetes are the only surviving linguistic descendants of the Scythians — who spoke a northeastern Iranian dialect. Modern Ossetian and Persian are very distant cousins — it would be like English and Icelandic, say — but it’s all part of this broader Iranian culture.”

Greater Iranian civilization involves a huge and historically complex area that corresponds roughly to what we know today as Central and West Asia. It includes a vast range of peoples who’ve settled from Eastern Europe to China and India, with a written history going back 2,500 years.

“When people hear the word Iran, they think of the Islamic Republic that we know today. But I’m looking at the broader civilization that would be analogous to, say, Greco-Roman civilization or Chinese civilization, because it has that same foundational role in the history of Eurasia,” he notes.

“While the Ossetes’ Sarmatian ancestors separated from the other Iranian peoples more than 2,000 years ago, the Tajiks were part of the Persian world until as recently as the 18th century. They are of course associated with Tajikistan, but in fact most Tajiks live in Afghanistan, where they’re about 40 per cent of the population,” he reports.

“Their language is really a dialect of Persian, called Dari in Afghanistan, but it’s basically Persian. I focused on that whole Tajik region — not just Tajikistan but also Uzbekistan, Afghanistan and even Xinjiang province in China.”

Since the first edition came out, it’s been a turbulent time for Tajiks in Central Asia and beyond. Owing to this, Foltz’s publisher contacted him with the idea of doing a revised edition.

“Because so much has happened in the last four years, my publisher contacted me and told me they want to do a second edition of the Tajik book, taking all this into account. So I went to Uzbekistan in April and wrote two new chapters for the book,” he says.

“I touch on the Taliban coming back to power in Afghanistan, unrest in Badakshan, and the Tajiks in Russia and how they’re impacted by the war in Ukraine. Forty per cent of their economy is remittances from Russia.”

The revised History of the Tajiks will come out in January 2023, and caps a productive period for Foltz. His next academic article, on surviving Ossetian speakers in central Turkey, will be published in the journal Iran and the Caucasus in the fall.

Learn more about Concordia’s Department of Religions and Cultures.