The student-athlete from Donnacona, Quebec, has had a record-breaking season
|
By Catherine Grace 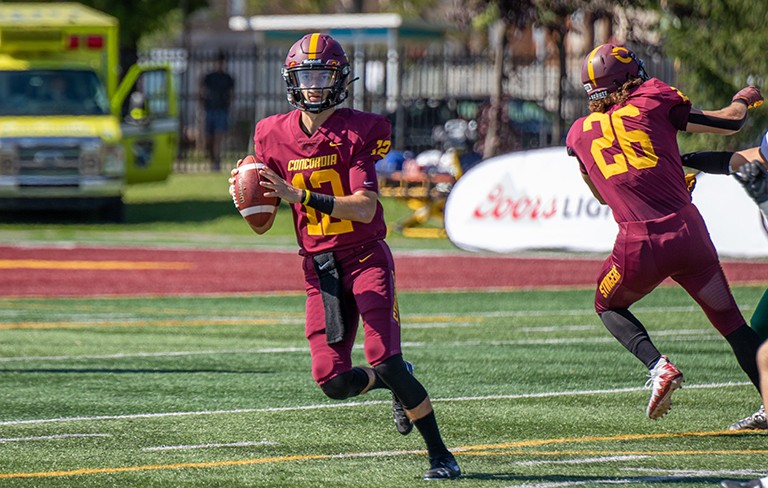 Concordia Stingers quarterback Olivier Roy was a good athlete growing up in Donnacona, Quebec, a town with a population of 7,200 located 40 kilometres west of Quebec City. He played baseball, was a strong hockey player and was a captain on the football team at École secondaire Donnacona.

After high school, Roy decided football was his passion and took his talents to Cégep de La Pocatière, situated one hour east of Quebec City and with a population smaller than his hometown. There, he played three seasons for Les Gaulois, who compete in the lowest of three divisions offered at the CEGEP football level.

During those years, Roy’s team won six of 24 games. But by the time he played his last season in 2018, he was a team captain and earned an all-star award.

Despite the honours, he thought his football career was over. With just six university football programs in Quebec, Roy wasn’t sure any of them had space for a small-town quarterback from a Division 3 CEGEP program.

Yet the Concordia football coaching staff had been watching Roy’s progress carefully. The coaches recognized his athletic ability and leadership and asked him to come to Montreal to study human relations at Concordia and join the Stingers, although they thought he might be a better fit at the receiver position.

Roy arrived in the city in 2019 and went to Stingers’ training camp, where he proved himself, earning a place as the team’s number two quarterback behind Adam Vance, an all-star from Visalia, California. Roy dressed for all eight regular season games but played sparingly, completing just one pass in eight attempts. 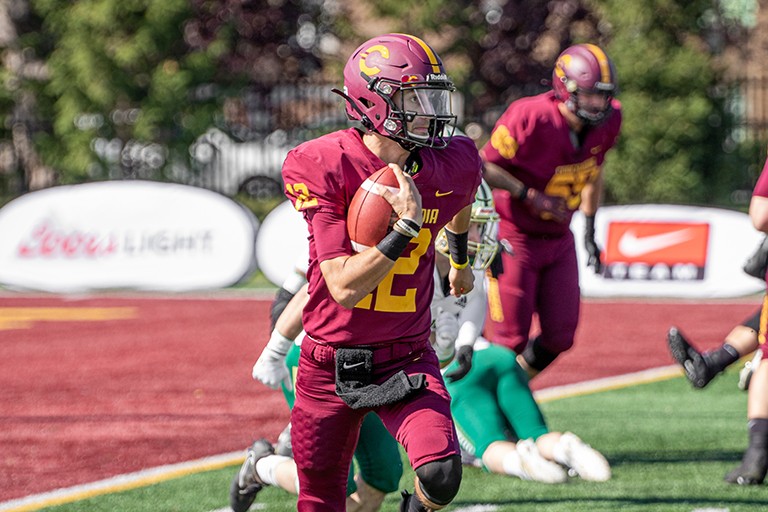 The COVID-19 pandemic took away the 2020 football season, but Roy continued to work with the coaches and was well prepared when this year’s training camp opened in early August. Fast-forward to the end of September and Roy, now the Stingers’ starting quarterback, is creating a big buzz.

He’s directed the team to three dramatic come-from-behind victories and is leading the country in several statistical categories. Roy also set a Réseau du sport étudiant du Québec (RSEQ) and Concordia record by passing for 580 yards in a 42-39 overtime victory over the Sherbrooke Vert & Or on September 25. It was the second-best performance ever by a Canadian university quarterback, after only the 627 yards by the University of Calgary’s Greg Vavra in 1983.

The awards have been piling up for Roy as well, including being named the RSEQ Athlete of the Month for September and the U SPORTS Outstanding Player on Offence for the week ending September 26.

Not to mention that he’s become a media darling and does several interviews a week on behalf of the Stingers.

Roy recently shared his thoughts on his success and the record-setting day with journalist Philippe Asselin of the Journal de Montréal. “I never set these things as goals, not even in my wildest dreams,” Roy said.

“I’m glad it happened, but I don’t work for records, the goal is always to win games.”

“Olivier is playing out of this world,” Collinson says. “He carries the team on his shoulders, he takes all the pressure and plays at a level I’ve rarely seen.”

To see Olivier Roy in action, get your tickets for the Concordia Stingers football team’s next home game on Saturday, October 16, at 2 p.m., versus the Montréal Carabins at Concordia Stadium on the Loyola Campus.