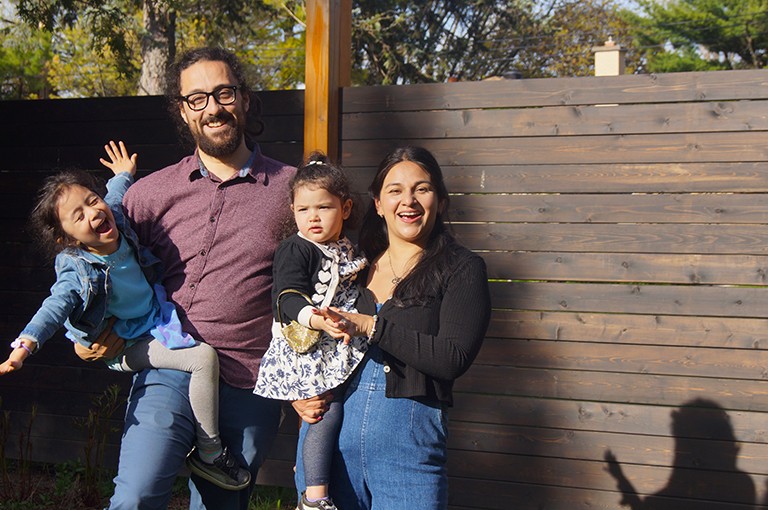 Tania Portillo: “I’m grateful to the employees and parents I met at CUSP.”

Tania Portillo began her Bachelor of Education at Concordia a year after having her first child. She recently graduated from the Teaching English as a Second Language (TESL) program and says she could not have done so without a strong support network.

“While I was on maternity leave with my first daughter, I had a lot of time to think. I had a degree, but I wasn’t working in a field that made me happy,” Portillo recalls. “I always thought about becoming a teacher, but I never took that chance because I was scared.”

But after giving birth, she realized it was now or never. “I joined Concordia as a visiting student in 2017 and began the TESL program in September 2018.” At this point, she was pregnant with her second daughter.

As she began to juggle being a parent and full-time student, Portillo says her biggest challenge was time.

“I treated school like a full-time job. Any work I did on campus I tried to finish on campus so that when I would come home I could focus on my kids,” Portillo explains.

“I also had to let certain things go. For instance, I had to give up some weekends spending time with my children. And I had to learn to be quick on my feet because I didn’t have time to focus on little mistakes.”

After having her second daughter, Portillo took two months of maternity leave before going back to school.

“I was juggling having a newborn and school. My husband would sometimes bring the baby on campus so that I could feed her in between classes and I would use the student parent centre to pump.”

“CUSP provided amazing moral support,” Portillo says. “Just being able to see and speak with other student parents and having a space where those two lives merge — it was a space of comfort, where we could relate to each other.”

“We aim to develop a support system, programs and different workshops to help students who are raising families while studying.”

Impacts of a shift online

With the additional challenges brought by the COVID-19 pandemic, Portillo realized she could no longer separate mom life and school.

“I couldn’t compartmentalize my roles anymore,” she says. “I had to take care of my daughters and be a student full-time all from home. This was also around the time my husband was finishing his paternity leave. It was very difficult at the beginning.”

Portillo was on mom duty full-time during the day and couldn’t touch her schoolwork until the evening. On some nights, Portillo recalls working until 3 a.m. then sleeping for three or four hours before starting again the next day.

Despite these challenges, Portillo says she was surrounded by supportive classmates and professors.

“I became known as the TESL mom within my program, and everyone was very accommodating,” she says. “I’m also grateful to the employees and parents I met at CUSP — I don’t think I would have been able to get through my program without them.”

Gangat hopes that Portillo’s story will resonate with other student parents, or even parents who are thinking about becoming students, and help spread the word about the different resources the centre offers.

After the transition to an online scene, Gangat says that CUSP has actually had a better turnout for some of their programs. “It’s easier in a sense because people can join from the comfort of their own homes.”

Looking back at the past three years, Portillo says so much has happened.

“I didn’t expect to graduate like this, but I’m so excited and I feel fantastic,” she says. “For all of us, whatever our reality, we face it day by day.”

Find out more about the Concordia University Student Parents Centre.