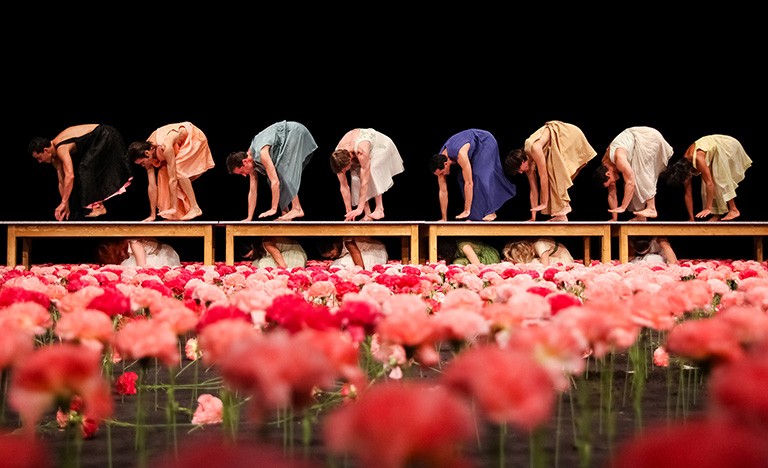 The COVID-19 pandemic forced the cancellation of the Tanztheater Wuppertal Nelken tour, but Montreal company Danse Danse has found a creative and safe way to bring the German choreographer’s work to the city.

SEPTEMBER 29 UPDATE: The outdoor performance was cancelled, but the work of Concordia’s dancers will be showcased in a video montage on Danse Danse’s website in mid-October.

Concordia contemporary dance students will be part of a big-screen performance of an iconic Pina Bausch piece in late September.

The COVID-19 pandemic forced the cancellation of the Tanztheater Wuppertal Nelken tour, which was set to come to Place des Arts from September 30 to October 3. But Montreal production company Danse Danse has found a creative and safe way to bring the German choreographer’s work to the city nonetheless.

On September 27 it will host an outdoor public performance of the Nelken Line by students from the École de danse contemporaine de Montréal and the École supérieure de ballet du Québec. The dancers will perform one of the most well-known elements of Nelken, a sequence called “Spring, Summer, Autumn, Winter” that evokes the changing of the seasons. The piece is set to “West End Blues” by Louis Armstrong and His Hot Five.

Danse Danse also extended an invitation to the city’s contemporary dance community to film themselves performing the Nelken Line, and the submitted videos will be collaged together and projected at Place des Arts during the outdoor event.

“It’s a really beautiful, light, uplifting performance,” says Concordia part-time instructor Isabelle Poirier. “When I saw the call-out, I just knew I wanted to bring this to my class because it would be a beautiful project to do together.”

‘A positive start to the school year’

Poirier consulted with her students first before making it part of the class curriculum. “For me it was important that it was something they wanted to do, not just me pushing a project,” she says.

“I think they need to feel that respect — they’re dancing in their kitchens, in their small bedrooms this year. I thought the more respect that I could offer would help our communication and the way they grow as dancers.”

The invitation was quickly extended to the entire dance department, with chair Michael Montanaro also becoming involved in supporting the initiative. For Poirier’s students, who are learning contemporary dance entirely online this term, preparing for the performance has given them strong momentum and a positive start to the school year.

“They’re really growing through the class and getting very physical. They’re going back to that experience of being a dancer,” she notes.

Poirier has been working with small groups in breakout Zoom rooms to help students think through their performances. Some planned to film outdoors together while respecting social distancing guidelines or perform in the university’s dance studio. “They’re having fun and they’ve started putting ideas on the table,” she adds. “I’m just trying to be as supportive as I can be even though we’re not in the same room.”

Pamela Feghali, a first-year contemporary dance student, met up with eight peers to film their performance in the fountains on top of the Place des Arts theatre. They wore all-black outfits with pops of blue, green, yellow and red to symbolize the seasons.

For Feghali, the location had a special resonance, as she'd spent much of her summer hanging out there. "It's a really relaxing area to go and contemplate and make art," she says.

The group kept two metres distance between each other while performing the choreography zigzagging through the fountains. Their edited film included shots of the group as well as close-ups on dancers' faces, hands and feet. Feghali says it was nerve-racking and exciting to finally meet her classmates in person and to perform together.

"I was really excited to get my feet wet, literally, and it was such a vulnerable experience as well. We were meeting for the first time, performing in the water with fountains splashing all over us in a public space. Some people gathered around and were filming us. It was a very magical experience."

The world-renowned Nelken, first performed in 1982, is an ensemble piece involving 22 dancers and is set in a sprawling field of 8,000 carnations. The Danse Danse event is an extension of the Pina Bausch Foundation’s Nelken Line project. Since 2017, it has invited professional and amateur dancers from around the world to film themselves performing the sequence in order to keep the choreographer’s legacy alive. The multi-year project was initially expected to end in early June, but it was extended until the end of 2020 because of the pandemic.

The outdoor performance of Nelken Line takes place on September 27. The event is free for a maximum of 150 attendees — no registration required. Social distancing and face masks are mandatory.