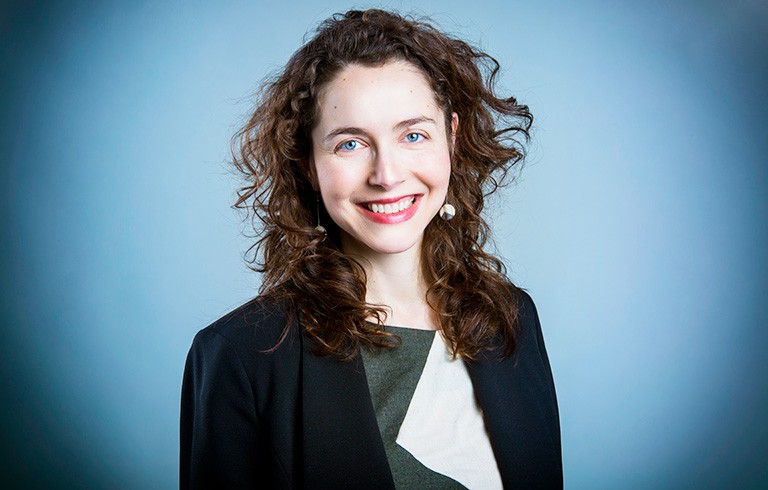 Emily Kopley marked the successful completion of her stint as the inaugural researcher-in-residence at Concordia University Library on January 23. Introduced three years ago, the Researcher-in-Residence program is part of a strategic plan to foster a strong research culture within the library.

Kopley holds a PhD in English from Stanford University in California and was a Mellon Postdoctoral Fellow at McGill University. She is especially interested in modernism, book history, authorship, literary form, gender and sexuality and Jewish-Christian literary relations.

Her first book, a version of her PhD dissertation, is Virginia Woolf and Poetry, and will come out in August with Oxford University Press.

Kopley is also a recent recipient of a 2019 Silvers Grant for Work in Progress for her second book project, The Life of Anon: Concealed Authorship in Britain and America, 1880 to 1950.

Can you speak about the two main goals that you pursued during your residency?

Emily Kopley: My first goal was reading among the anonymous and pseudonymous texts held at Concordia. Concordia does not have a devoted collection of these texts — no library does. But what the university does have that is very special is the Gay and Lesbian Literature Collection at Vanier Library.

My second goal was exploring the cataloguing and searching methods that could facilitate the discovery and attribution of anonymous and pseudonymous texts.

Among the anonymous and pseudonymous texts held at Concordia, what kind of works informed your research?

EK: I have researched the book reviews of Forrest Reid, a Northern Irish writer of the 1910s, 1920s and 1930s. He was a novelist, essayist and book reviewer, and sometimes he reviewed work that was anonymous. He also happened to be gay, and that’s why his work can be found in the Gay and Lesbian Literature Collection.

Reid wrote a lot about the poet Walter de la Mare, another writer I’m interested in. De la Mare did not write anonymously or pseudonymously but wrote about aspiring to be a Mr. Nobody, something he couldn’t do because it wouldn’t turn a profit.

I am interested in the connection between Reid and de la Mare and their attraction to anonymity even though they were not themselves anonymous.

How did you go about exploring the cataloguing and searching methods that could facilitate the discovery and attribution of anonymous and pseudonymous texts?

EK: The librarians and library team members were hugely helpful in my research. Since I don’t have a library background, I’m not familiar with metadata and the tagging and cataloguing of records. So, in order to have some way to search for anonymous and pseudonymous texts, I needed to understand more about how these records were created.

Pat Riva, associate university librarian for Collection Services at Vanier Library, explained how metadata works and how tags are chosen. I also got support from Olivier Charbonneau, marketing and management librarian, who explained how copyright works and ensured that I was legally allowed to extract data from old bibliographies, and also made sure that I retained copyright of my own research and database.

And Alex Guindon, geospatial and data services librarian, pointed me to the English Catalogue of Books, which contains a listing of every title published in English (in Britain) by year, which helped me determine what share of the book market would have been anonymous or pseudonymous.

Another extremely helpful resource was the interlibrary loan (ILL) staff. Rajiv Johal, head of ILL, was able to provide me with so many obscure books from libraries all over the world. Without the assistance of his team, I could not have done my research.

What I found unique to Concordia is the particular wealth of knowledge and generosity among the librarian staff. Everyone was so available and ready to meet with me at length. I learned so much about librarians’ research and the different ways knowledge is organized.

During your residency, you had several opportunities to present your research. Did you find that these presentations helped you focus on certain aspects of your work?

In the first month of my residency I presented at a brown bag lunch, during which I introduced myself and my research to the Concordia Library community.

I discussed the case study of three siblings who were the children of a famous British architect and author, Basil Champneys. He had four children, three of whom were authors in the early 20th century. The siblings wrote prolifically in many genres — novels, poetry, detective fiction — usually anonymously or pseudonymously.

I wanted to explore the motives that they shared and those that were unique to each of them, as well as the different genres in which they wrote. Studying this one family gave a sort of a representative picture of the many reasons why one might be anonymous or pseudonymous in the early 20th century.

My second presentation was part of the April 2017 Library Research Forum and focused on my efforts to gather statistics and achieve a representative data set of anonymous and pseudonymous literature for analysis. While all of the cataloguers and librarians were helpful in explaining how cataloguing and metadata work, I concluded that there was no way to achieve a representative data set.

It was encouraging to receive feedback at my talk, even if the talk had highlighted the challenges of my research.

My third and most recent presentation was a library seminar that I gave last November upon my return from maternity leave.

I had a breakthrough in my research, which was the discovery that the main bibliography for my work, A Dictionary of Anonymous and Pseudonymous English Literature, had been digitized over summer 2019 by the Wellcome Trust of London.

The existence of the dictionary in PDF form allowed me to use it to gather statistics. I turned the PDFs into OCR (optical character recognition) text, and then helped write a computer program that converts the dictionary into a spreadsheet.

What were the everyday activities that you carried out as a researcher-in-residence and what motivated you in this role?

EK: Often I met with librarians, but usually I was alone, reading or photocopying. I wanted to have as many anonymous books as I could, so I ransacked ILL and monopolized the Xerox machine!

To determine my case studies, I read widely. One week I would be reading in anonymous memoirs from World War One, and the next I would be reading anonymous women authors from the 1920s and 1930s. And I’d also be trying to see if there are archives for these authors, what’s in those archives, what’s already been said, etc.

You are the recipient of a 2019 Silvers Grant for Work in Progress for your current book project, The Life of Anon: Concealed Authorship in Britain and America, 1880 to 1950. Can you tell us more?

I would like to reach a wider audience with my book and I felt that the Silvers Grant was an appropriate resource to target. It will allow me more time just to focus on my research and the book, as I was doing during the Researcher-in-Residence program.

Emily Kopley is now a research affiliate in Concordia’s Department of English. She can be reached at Emily.Kopley@concordia.ca.

Find out more about the 2020-21 Concordia Library Researcher-in-Residence program. The call for applicants is now open and the deadline for complete applications is March 20 at 5 p.m.