Daniel Rodrigues: “We’re very happy with the way it went”
|
By Theresa Knowles 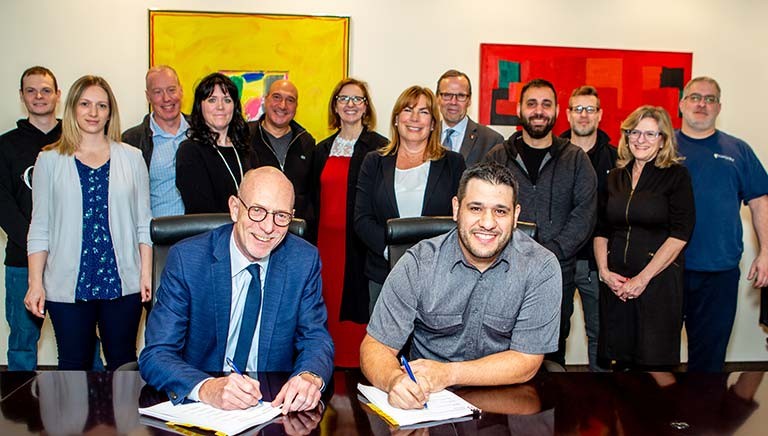 The atmosphere was celebratory and energetic when Carolina Willsher, associate vice-president of Human Resources, began the ceremony.

“I really appreciate the opportunity to sign the collective agreement that I know everybody’s worked so hard on getting right,” she said. “We have an agreement that we can all be really happy with and proud of.”

Willsher thanked Daniel Rodrigues for his leadership on the union side of the negotiating table. Benoit Duchesne takes over for the next round.

Rodrigues talked about how over the past three rounds of bargaining he’s seen the negotiation process change for the better. “We enjoyed good negotiation conditions and good communications,” he said. “It was an enjoyable negotiation.”

He went on to thank both sides of the table for the work that’s been done. “We’re very happy with the way it went.”

“Successful negotiations happen when both parties want to understand each other. We’ve been working really hard to create a good climate for labour negotiations across the university.”

Carr also spoke about how much the work of the CSN trades employees matters to Concordia. “Thank you for all that you give to the university,” he said.

“We want to make sure that you feel valued. Your commitment to Concordia is what makes the university successful.”