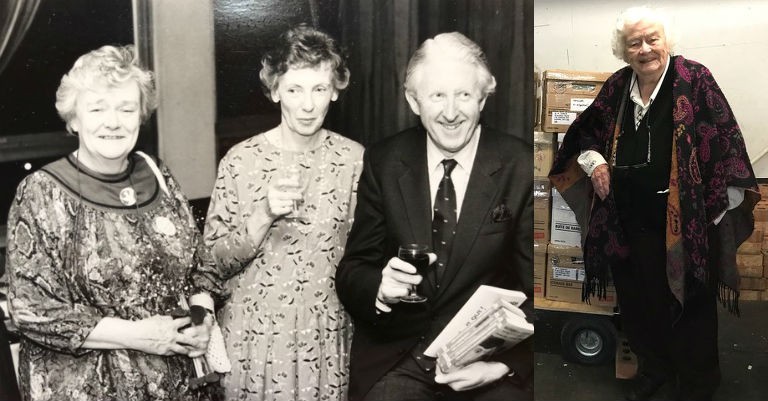 Jo Vellacott focused on the role of women in the pacifist movement during the First World War.

The Concordia community mourns the loss of Jo Vellacott, the first regular full-time faculty member at the Simone de Beauvoir Institute. Vellacott taught and pursued her research there from 1982 to 1987. She died on February 22, 2019, at the age of 96.

A pioneer in the study of women’s history, Vellacott focused on the role of women in the pacifist movement during the First World War. More broadly, her research centred on the history of democratic suffragists, pacifism and modern British history.

Her publications include Conscientious Objection: Bertrand Russell and the Pacifists in the First World War, Patriots and the Vote: The Erosion of Democratic Suffragism in Britain During the First World War and From Liberal to Labour with Women's Suffrage: The Story of Catherine Marshall. She also co-edited Militarism versus Feminism: Writings on Women and War.

In 2017, Vellacott published a memoir of the first 25 years of her life, Living and Learning in Peace and War.

As a visiting associate professor and later an adjunct fellow at the Simone de Beauvoir Institute, Vellacott introduced courses such as You and Government, an examination of the effects of government on women, and Women and Peace, a focus on feminist alternatives to war and hierarchical structures.

She also served on the curriculum committee and worked with the larger community of women in Montreal on the National Action Committee on the Status of Women and the Voice of Women.

In 2014, on the occasion of the 100th anniversary of the start of the First World War, Vellacott attended the 83rd Anglo-American Conference of Historians in London, England, to present her talk, The War Work of an Anti-War Activist: Catherine Marshall, 1914–1918.

Marshall was a suffragist who worked closely with Bertrand Russell in the First World War and a founding member of the Women’s International League for Peace and Freedom.

“It matters to keep the story of Marshall and those like her alive,” Vellacott said in a 2014 interview with the Oxford University alumni magazine.

“She wanted to pursue peacemaking on the basis not of hatred and vindictiveness, but on something that would last. That did not happen, of course, but the lesson is as relevant today as ever it was.”

Born in Plymouth, Devon, England, Vellacott graduated from Oxford University in 1943 and worked as a mechanic in the Women’s Royal Naval Service during the Second World War.

Catherine Kellogg, interim chair of political science at the University of Alberta, was a student of Vellacott’s in 1982 and took nearly half a dozen classes with her. Kellogg’s time as an undergraduate was difficult and she remembers herself as a challenging student.

“She had faith in me when I had no faith in myself,” Kellogg says of Vellacott. “For me, she was like a substitute mom.”

Kellogg was able to finish her undergraduate degree and decided to apply to a master’s program. She visited Vellacott at her home in Montreal’s Notre-Dame-de-Grâce district to ask for a reference letter.

“I was scared because I had been such a terrible student,” remembers Kellogg. “But she looked at me and said, ‘You are one of the most fertile and interesting minds I’ve ever had the pleasure to know and I have complete and utter faith in you.’”

These words have stayed with Kellogg.

“It meant everything to me,” she adds. “That’s not the only thing that gave me the capacity to get to graduate school but it was one of them.”

‘A quiet but powerful role model’

Margaret Kamester (GrDip 78, Cert 86), met Vellacott when she was enrolled in the Women’s Studies certificate program. She remembers one class in particular during a discussion about conscientious objectors.

“We were paired off and had to talk to each other as if we were mother and son,” Kamester says. “The son being the conscientious objector. Then we reversed the roles. Her classes were rarely straight lectures; there was a lot of student involvement.”

Outside of the classroom, Vellacott was careful to engage with students, making even the most mundane tasks more interesting.

“I think Jo knew it wasn’t the most scintillating work, so at the end of a day we’d stop and have tea and a chat,” Wiegand recalls. “She was a comfortable and easy person to be around, not to mention very knowledgeable and engaging.”

A few years after graduation, she reconnected with Vellacott.

“I’m a better person for having known Jo,” says Wiegand. “She documented, among other things, the previously unknown yet significant accomplishments of women in the U.K. who worked for years demanding suffrage, peace and labour rights. As a society, we are better for the legacy that Jo has left us.”

Wiegand spent time with Vellacott in Toronto shortly before she passed away. They worked together to finish sorting research on Marshall to be used by a British academic who has plans to write a book on the suffragist.

During breaks in their work, Wiegand and Vellacott chatted over tea, just like they had during Wiegand’s time at the Simone de Beauvoir Institute.

“Being a long-time Quaker and serving on people’s committees of care, Jo had shared her thoughts about death and dying with me. These were conversations that I found to be compelling and surprisingly reassuring,” Wiegand says.

“She’s been a quiet but powerful role model in my life and a valued and trusted friend. I’m very grateful to have known her.”

Kamester adds: “The way she lived out her beliefs has been an inspiration and blessing for the many people she knew during her long life.”

A memorial service for Jo Vellacott will be held in Montreal on Friday, June 14, from 5 to 7 p.m. For more information, please send an email to lemajune14@mail.com with your name and phone number.

A meeting for worship will be held by the Religious Society of Friends (Quakers) in Toronto on Saturday, June 29, at 1 p.m. at Friends House (60 Lowther Ave.).