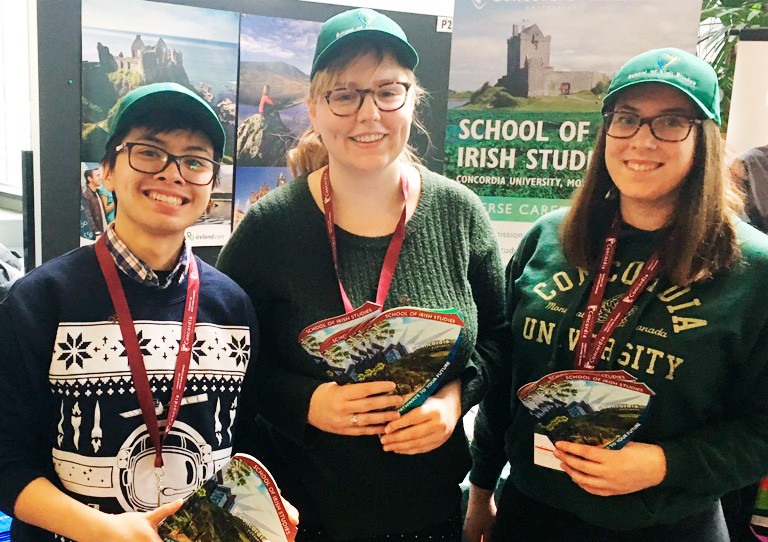 Some 5,000 guests visited both Concordia campuses at winter Open House on February 16.

Concordia President Alan Shepard welcomed members of the Board of Governors to the March 13 meeting. His report is available in the Board materials.

Shepard thanked the many volunteers who helped make winter Open House a great success, as some 5,000 guests visited both campuses on February 16. He pointed out that there is a growing interest in Concordia’s graduate studies.

He informed the Board that Concordia is advancing on its Indigenous Directions Leadership Group action plan, which includes new university appointments: Heather Igloliorte, associate professor in the Department of Art History, as special advisor to the provost on Advancing Indigenous Knowledges; and William Lindsay, as senior director of Indigenous Directions.

Shepard reported that the John Molson School of Business case competition teams continue to shine. He added that the Engineering and Commerce Case Competition is especially noteworthy because it brings together students from two faculties.

He mentioned that in January the university hosted hundreds of students at a hackathon and that two Concordia engineering students earned top honours at the Harvard University hackathon.

Shepard also reported good news on the fundraising front. The John Molson School of Business will benefit from a recent $250,000 donation from alumnus Greg Rokos (BComm 82).

Significantly, Concordia was set to announce an historic $5.6-million gift from the Peter N. Thomson Family Trust to the Faculty of Fine Arts, the largest in the faculty’s history.

He added that the Campaign for Concordia is well on its way to meet its $250 million goal.

Shepard sent congratulations to the Stingers men’s and women’s basketball teams for advancing to the Canadian national championships for the first time in many years, and to the men’s hockey team for their victory over the McGill Redmen at the 32nd annual Corey Cup game on February 3.

Anne-Marie Croteau, dean of the John Molson School of Business, presented the Finance Committee’s recommendation for a tuition fee increase for the Goodman Institute of Investment Management.

The institute’s MBA program was the first to fully integrate the Chartered Financial Analyst (CFA) into its curriculum. Classes are delivered simultaneously in Montreal and Toronto via videoconferencing. There has been no tuition increase since 2012.

As detailed in the Board materials, the committee proposed to raise tuition from $18,000 per year to $22,000 per year for students from Quebec and the rest of Canada, and to $27,000 per year for international students, effective for admissions for the fall term 2019.

The program is privatized fully and receives no subsidies from Concordia or the government. Its margins have narrowed significantly and it faces continuously mounting costs due in part to rental of space and travel between Montreal and Toronto.

A portion of the additional revenues will be used for additional career development and services to students.

About 60 per cent of the program’s students are international. The added revenues will also be used to improve students’ language skills and for cultural training.

The Goodman Institute holds a great competitive advantage. No other Quebec school offers the joint CFA/MBA program. Many of its graduates move on to great success in their careers.

Croteau explained that the increased revenue is essential for the institute to remain competitive and operate at its existing high level.

The Board approved the fee increase.

For his quarterly report on the university’s compliance with environmental legislation and health and safety, vice-president of Services Roger Côté discussed the full year since it was the end of the fourth quarter.

Côté reported that the majority of the leading safety indicators trended favourably in 2018.

The Environmental Health and Safety (EHS) team continued to focus on conducting preventative internal inspections and assessments, emphasizing the evaluation of restricted areas, including elevator mechanical rooms and machine rooms.

The increase in inspections and assessments resulted in an increase in internal non-compliance citations. These steps allow EHS to correct situations that could have resulted in a member of the university community being injured, Côté said.

Côté reported there was an increase in total injuries and work-related injuries in 2018. However, this did not significantly vary the number of worker compensation claims or lost-time days.

teaching Board of Governors learning administration