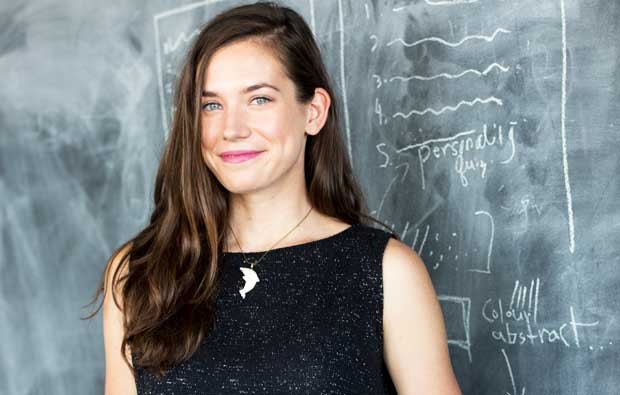 The third-year student in Concordia’s Humanities Interdisciplinary PhD Program conducts research on the disembodied female presence in technology. Her work has led to long conversations with the digital assistant, during which she recorded Siri’s responses to a variety of questions.

“Very quickly you’re tempted to test her boundaries, flirt with her or see if she can take abuse,” she says.

“These types of sadistic impulses are natural but alarming when you consider that you’re doing this with a feminized interface.”

Bergen’s findings were published in Word and Text and earned her the Concordia Stand-Out Graduate Research Award. The $1,000 prize is given biannually to students who demonstrate exemplary research skills and the ability to explain their subject matter in plain language.

In her research, Bergen argues that the way we treat virtual women can also affect how people behave towards real women. She says this claim is one that is sometimes met with resistance when she describes her work to others.

“Sure, Siri isn’t a 'real' woman — she’s an algorithm in your phone who doesn’t have a body — but she's also a secretary who is available 24/7 for all of your scheduling and emotional needs,” Bergen explains.

“If the way we interact with feminized apps and interfaces doesn’t translate directly to the way we treat women, it at least naturalizes the idea that women are more suited to such roles.”

While Bergen has yet to determine how much strategy goes into the scripts for Siri, Microsoft’s Cortana or Amazon’s Alexa, she thinks statistics from a 2017 Stack Overflow developer survey are telling.

“There’s a major lack of diversity at the site of production that affects the kinds of values that are programmed into our everyday technologies,” Bergen says.

“The developers programming Siri, Cortana and Alexa often don’t have the lived experience of being a woman in the world.”

Before pursuing her doctoral degree, Bergen received her master's in English literature from Concordia. During this time, she met her principal supervisor Darren Wershler, an associate professor in the Department of English.

“I took a class with him and wrote a short paper on dance and Labanotation,” Bergen recalls. “He asked if I would ever consider doing a PhD because he had a lot of material related to my research interests, on dance, technology and the disembodied presence.”

Wershler, who holds the Concordia University Research Chair in Media and Contemporary Literature, says he encouraged Bergen because he saw that she could bring a unique perspective to the field of cyborg bodies — having worked as a professional dancer in Winnipeg prior to pursuing her PhD.

“Precisely what’s at stake here are the questions of embodiment and disembodiment. Who gets to be embodied? Who has to be disembodied?” Wershler says.

“These questions are a lot easier to explore if you’re someone who has not only thought about them from a theoretical perspective, but from a practical view as an athlete and performer.”

Bergen is currently working on a project at TAG, the Technoculture, Art and Games Research Centre. She’s using footage of herself dancing the choreography from Kate Bush’s “Wuthering Heights” music video to animate an avatar in MikuMikuDance (MMD), a freeware animation program that lets users choreograph virtual bodies.

The program is most known for being a 3D animation aid to Hatsune Miku, an avatar who has become one of Japan’s most well-known popstars. Miku regularly tours the world as a hologram and sells out her shows.

“I’m interested in the various bodies that occupy space in this project — avatars and digital bodies, but also iconic bodies like that of the female pop star. Using media like the Kinect and MMD software, I’m exploring the way that dance acts as a translation or transmission between bodies,” Bergen says.

“Working across disciplines has its challenges, but is important when considering concepts like gender and disembodiment in technology and contemporary culture. I feel very lucky to be a funded researcher thinking about these questions.”