'It exceeded my expectations and opened up my mind'

ONE YEAR ON: The inaugural cohort of the Graduate Certificate in Innovation, Technology and Society look back on what they learned
|
By J. Latimer 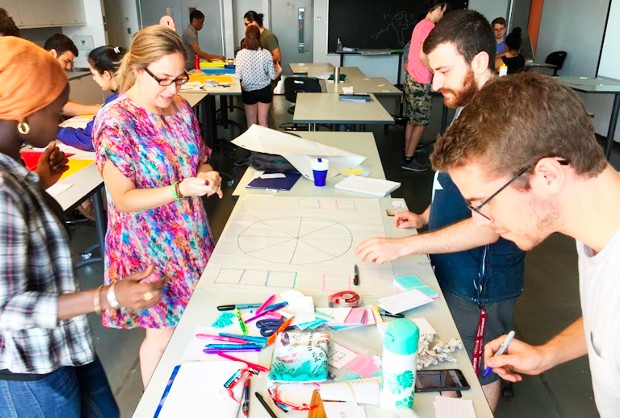 Anna Karina Ehrhardt: "We applied what we learned by doing a hands-on project at District 3."

EDITOR'S NOTE: The application deadline for Canadian/permanent residents who wish to begin the Graduate Certificate in Innovation, Technology and Society in January 2018 has been extended until November 30.

Anna Karina Ehrhardt (BComm 99) found herself in a constant state of frustration while working for large telecommunication corporations back home in Brazil.

“Innovation was either slow or non-existent,” says Ehrhardt. “That’s why I was drawn to Concordia’s Graduate Certificate in Innovation, Technology and Society.”

The new certificate is the first program to be offered by the Faculty of Engineering and Computer Science’s Centre for Engineering in Society. It provides students with the skills to engage in innovation practices, lead interdisciplinary teams and enhance their entrepreneurial abilities.

“It exceeded my expectations and opened up my mind,” says Ehrhardt, who is part of the first cohort that finished the certificate at the end of the 2017 summer term.

“Not only did the course curriculum and workshops provide practical tools and techniques, we also applied what we learned by doing a hands-on project at District 3,” she adds.

The interdisciplinary nature of the practicum is a key component of the certificate, explains Deborah Dysart-Gale, chair of the Centre for Engineering in Society.

“The idea is to create an interdisciplinary group driven by entrepreneurial spirit or vision, in order to generate an environment in which students can immediately put design theory and user-centred communications pedagogy into practice.”

Students complete their practicum at Concordia’s District 3 (D3) Center for Innovation and Entrepreneurship, a design lab and startup incubator.

At D3, Ehrhardt’s team used artificial intelligence (AI) to help support refugees on their journey to a new country.

“We had an economist, two engineers, a tech person, a customer experience person – me – and an actual Syrian refugee on our team,” she says.

“Testing and user feedback is so important,” says Ehrhardt. “For our project, the refugee testers balked at certain personal questions, and we learned they had different sensitivities around issues of safety and confidentiality. It was an ‘aha’ moment.”

Dysart-Gale is more than pleased with the certificate’s outcome.

“The first cohort met the goal – to get the skills to pursue innovation – and they are now putting down roots at D3,” she says. “After completing the course, they decided to work within innovation pedagogy at D3. That’s very gratifying.”

Find out more about the Centre for Engineering and Society’s Graduate Certificate in Innovation, Technology and Society. The application deadline for Winter 2018 enrolment has been extended until November 30 for Canadian/permanent residents.