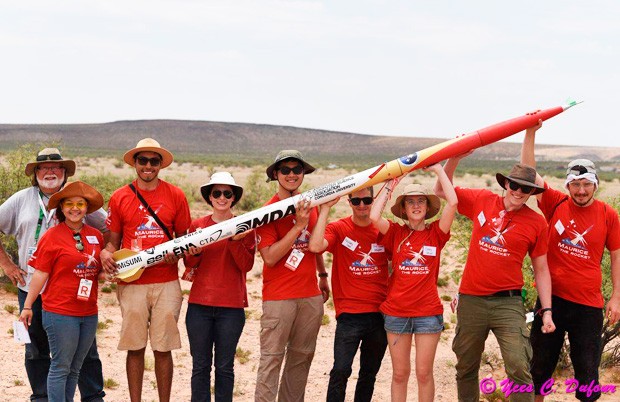 How do you become a rocket scientist? A group of 10 engineering students have learned exactly what it takes.

Space Concordia's rocketry team designed, built and launched their own rocket in June at the Intercollegiate Rocket Engineering Competition (IREC) in New Mexico.

Joining 115 teams from 10 countries in the desert, the Concordia team got the chance to see if all their hard work would pay off.

The event compares student-made multi-stage rockets with a payload size of 8.8 pounds and target altitudes of either 10,000 or 30,000 feet above ground level.

Competing rockets are anywhere from four to eight inches in diameter and eight to 20 feet long. Space Concordia competed with a student-designed, high-performance rocket in the 10,000-feet category.

Noha Messaoudi, an industrial engineering student and the team's project lead, had the job of launching the rocket. "I was shaking," she recalls. "With the push of a button I was going to find out if our rocket would launch and if it was going to land."

Seeing the fire ignite and the rocket blast off, she burst into tears. It was airborne!

The launch was a success, but not everything went exactly as planned. By the time their rocket was safely back on the ground, the Concordia team had learned many valuable lessons about rocket science.

Oleg Khalimonov, a mechanical engineering student, decided he wanted to design a retractable pitot tube. This is the sharp point at the very top of the rocket which acts as an airspeed sensor. It is very delicate and has to be consistently retracted within the nosecone upon landing to avoid bending.

Khalimonov’s design was the first of its kind in the IREC and he was asked to present a podium session on it so that other students could learn about how he had made his idea a reality.

Juan Sebastian Prieto, an aerospace engineering student, was in charge of designing the parachute as well as recovery of the launched rocket. His biggest takeaway lesson? "Testing is key."

Prieto’s goal was to eliminate the use of explosives in the ejection of the parachute. He spent so much time and energy on his prototype, however, that when it failed during testing, he realized he would not have enough time to make another.

"Next time I will know not to put off testing, even if things seem to be going well," he said. 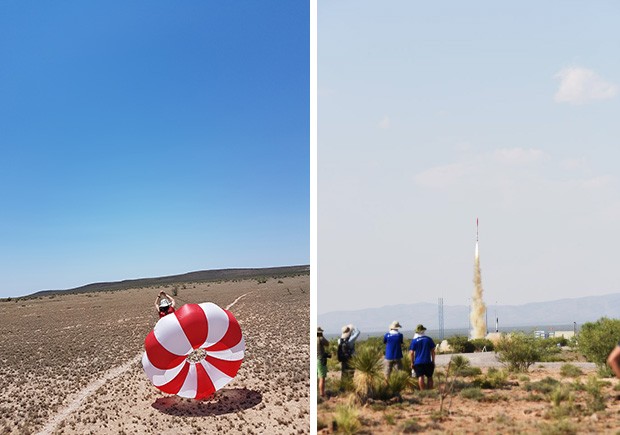 Have a plan B

The team also learned — twice — that backups are incredibly important.

Although well taped on to the rocket, the battery powering the parachute deployment computer came off because of the high speed at which the rocket spins when airborne.

Without the battery, the rocket's deployment computer which has the purpose of computing the rocket's altitude to determine when to eject the parachutes doesn’t work. Luckily, the team had installed a backup system, designed to function in case of a failure. This resulted in a perfect recovery and landing of the rocket.

Redundancy of the parachute deployment is a requirement of the competition, and the Concordia team’s experience proved why it is so important.

Before the launch, teams build and present their projects. The Space Concordia team received a lot of interest for their payload system, and everyone was excited to see what would happen during the launch.

"But it didn't work," says Messaoudi, explaining that the computer logging the data was damaged by the team’s manipulations the day before the launch.

The team did bring home an honourable mention for their payload, along with the knowledge that backup systems are as important as their professors said they were.

Know the conditions for success

"I had never been to the desert before," adds Messaoudi. "And it was so hot!"

The team had prepared for a windy desert launch based on the conditions they researched while in Montreal during the winter. But the moment Messaoudi stepped up to the launch platform, the wind died down. The skies were completely calm. As a result, the team overshot their altitude.

"We had prepared so much for windy conditions, we didn't have a plan for a scenario where there was none."

Messaoudi says next year's design is sure to include the option to adjust the rocket’s dead weight so that the team can adapt to the environment at launch.

Plan, plan, and plan some more

For Messaoudi, the rocket competition represented a chance to try her hand at project management, a role usually reserved for experienced industrial engineers. Her most valuable lesson: contingency plans are important.

“Even if you make a schedule, things are going to take longer than you expected, or you will need to change direction to make things work properly,” she says. “Dealing with competing needs and opinions is at the heart of being a great project manager.”

Want to learn more about becoming a rocket scientist? Check out Concordia’s Department of Mechanical, Industrial and Aerospace Engineering.