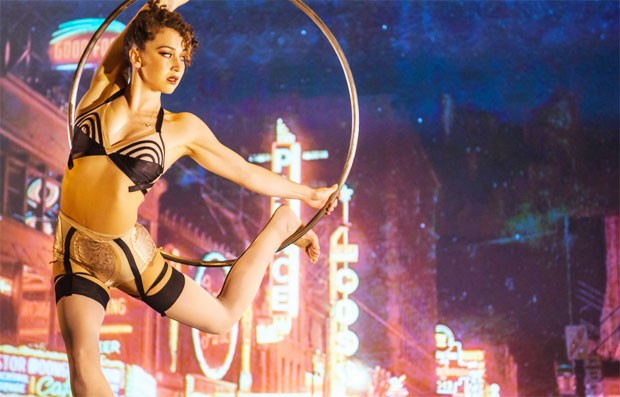 Montreal has always had a good reputation for being bad.

During the 1940s and 50s, the city’s red light district was an infamous neon-flashing party strip, with nightclubs and gambling dens that never slept and burlesque stars like Lili St. Cyr. Newspapers called it an “open city” because cash from vice-related industries fuelled organized crime and led to widespread civic corruption.

At the same time, Montrealers lived under the conservative, politically powerful Catholic Church. They also had a burgeoning suffragist movement and a reformer lawyer-politician, Jean Drapeau, who was determined as mayor to clean up the city.

Put it all together, and Montreal in the mid–20th century was a powder keg ready to explode. 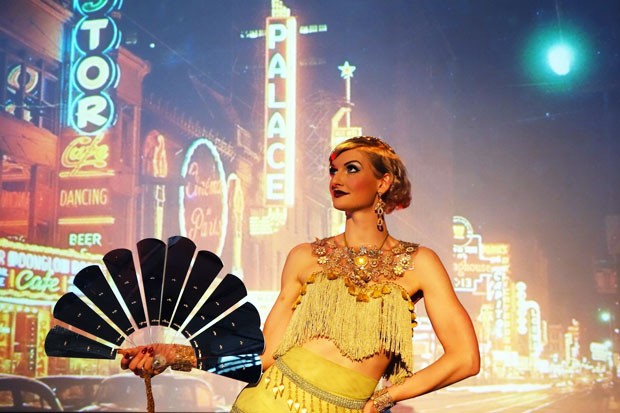 That’s the backdrop for creation collective Les 7 doigts’ new show, Vice & Vertu, which will run at the Société des arts technologiques (SAT) from July 10 to August 6. The production is part of the Montreal 375 celebrations and the Montréal Cirque Festival.

The show’s scenographer is Ana Cappelluto, associate dean of Planning and Academic Facilities for Concordia’s Faculty of Fine Arts and associate professor of design for the theatre.

Cappelluto started working on this show with directors Samuel Tétreault, Patrick Léonard and Isabelle Chassé in early December. She finished a design concept in February and for the last month has attended rehearsals in a Verdun auditorium to watch the large cast of 19 acrobats, four actors and four musicians interact with her designs.

“In French, the word scèneographie actually means more than set design,” Cappelluto says. “I am in conversation with everyone. I don’t work in isolation.”

‘You’d never see this in a rehearsal hall’

Like the era itself, Vice & Vertu is a fast-moving, tricky show, performed in four zones in and around the SAT. The set mock-ups in Verdun –– skeletal bandstands, boudoirs, bars and gambling dens, spread out across two hockey rinks –– are essential testing grounds for Cappelluto’s work before performers move into the real venue.

“I had to do 43 different iterations of floor plans! There were so many considerations because there were so many acrobats. For example, how will this swing affect that chandelier I am hanging just in front of it? There were constant, small changes.”

Pinned up against the rink’s boards, amidst photos, sketches and post-it notes, is a large, domineering spreadsheet that tracks each performer’s location at any given moment of the show.

“You’d never see this in a rehearsal hall,” Cappelluto says. “Stage management had to literally track each performer, which station they are at and what character they are playing. It’s phenomenal.”

The show begins with 500 audience members entering the SAT’s main hall. They are soon split up: one group will move upstairs to the SATosphere for an audiovisual show accompanied by aerial acrobatics; the second will move outside to Peace Park and the third will enter the red light district.

As the show is an immersive experience, Les 7 doigts asks audiences to get into the spirit of the times by dressing up for the event. 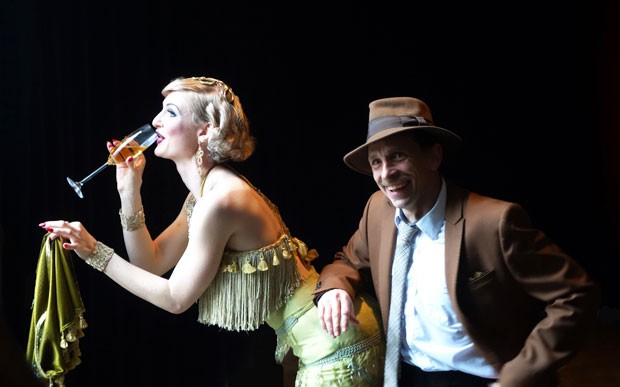 ‘Their process allows me to make a meaningful contribution’

Cappelluto has treated the look of her design with the care of a museum curator. All the decor reflects the style of the era.

She was inspired by former Montreal Gazette journalist William Weintraub’s classic book, City Unique, and the exhibition Scandale!, which ran at the Centre d’histoire de Montréal last year. Both document Montreal’s colourful underworld and Drapeau’s steely efforts to clean it up.

“I was raised in Europe so I had no real idea of the history. And there was the Church. They dictated the length of skirt, even the architecture — we address all of that.”

Cappelluto has worked with Les 7 doigts on two previous shows that have received huge international attention: Cuisine et Confessions, which recently played the National Arts Centre in Ottawa, and Réversible, currently on tour in Europe.

Assisting her for this show is former student Dominique Coughlin (BFA 13) who recently finished her MFA at Penn State.

“Working with 7 doigts is always fun. Their creation process allows me as a scenographer to make a more meaningful contribution,” Cappelluto says.

“I am in there, working with everyone from directors and acrobats to lighting technicians for an extended period of time. We become good friends!”

Vice & Vertu runs at the Société des arts technologiques (SAT) from July 10 to August 6. Find out more about Concordia’s Department of Theatre.