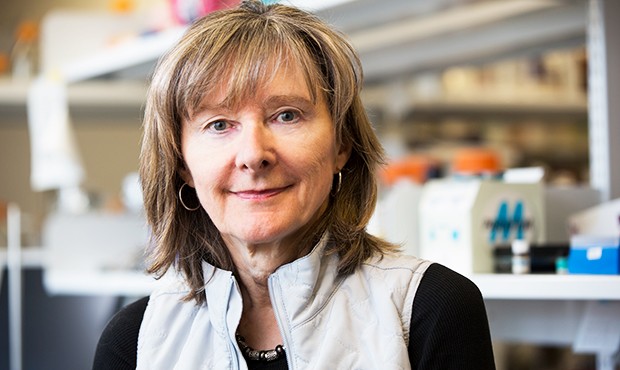 Ann English: “Recognition like this is a great incentive to do better.”

Every year, the Canadian Society for Chemistry (CSC) celebrates a woman who has made a distinguished contribution to the field in Canada. Concordia professor Ann English is the 2017 winner of the Clara Benson Award.

Sponsored by the Canadian Council of University Chemistry Chairs, the accolade is named in honour of the first Canadian woman to be granted a PhD in chemistry in 1903. Benson went on to have a highly productive research career.

English works in Concordia’s Department of Chemistry and Biochemistry, in the Faculty of Arts and Science. She holds an honorary Concordia University Research Chair and is the founding director of the Centre for Biological Applications of Mass Spectrometry (CBAMS), which she started building as far back as 1992. Her research is aimed at understanding how we might fight age-related diseases.

‘I am very honoured to join the Clara Club’

Tell us about the research work for which you won this award.

Ann English: This award is not for a specific research finding but for overall contribution to chemistry. My nominators highlighted a number of accomplishments when they submitted my candidacy.

They pointed to my leading role in the development of bioinorganic chemistry within Canada and my group’s work in biological mass spectrometry, which led to the establishment of CBAMS at Concordia.

Combining inorganic chemistry, biochemistry and cell biology, my research provides important insights into the redox biology of metalloproteins, particularly their role in orchestrating the cell’s oxidative stress response and in redox signalling by hydrogen peroxide and nitric oxide.

Recognizing early the potential of modern biological mass spectrometry, I secured numerous grants and donations from industry to turn CBAMS into a highly successful research and training facility. This has benefitted an entire generation of chemists and biologists at Concordia. The vast majority of my 90+ trainees hold top industrial, administrative and academic positions.

Beyond Concordia, I’ve contributed to the Canadian chemistry community extensively, sitting on numerous evaluation committees as well as chairing NSERC’s Grant Selection Committee for Inorganic and Organic Chemistry in 1995-96. I was also the technical program chair of the highly successful CSC Conference in Montreal in 2011 and organized many symposia and conferences on topics at the interfaces of inorganic chemistry, biology and biomedicine.

I was recently elected a fellow of the Chemical Institute of Canada (CIC) and currently serve as director of CSC conferences.

How did you feel when you learned you had won this award?

AE: I was delighted. Given that the Clara Benson Award is the most competitive national award handed out by the CIC/CSC, it is an honour to be selected by the committee.

Also, looking over the previous award winners, it is wonderful to have one’s name added to this list. The competitiveness of this award speaks to the excellence of women chemists in Canada. I am very honoured to join the Clara Club.

What’s next for you and your research?

Recognition like this is energizing and a great incentive to do better. We have a lot of exciting research going on in our lab that probes, at a fundamental, molecular level, how cells coordinate their response to oxidative stress and how this changes as cells age. Understanding such responses at the molecular level will help us to chemically define the aging process and to better fight age-related diseases.