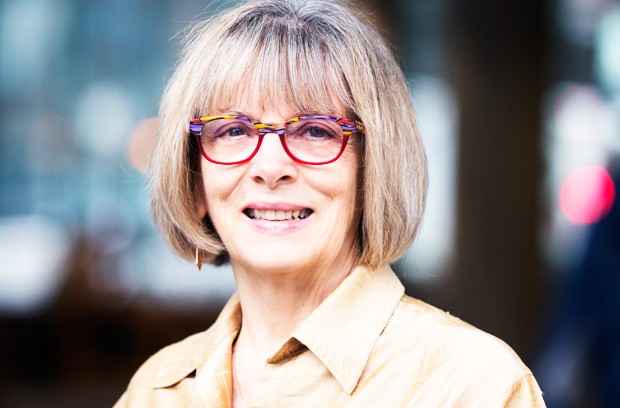 The honorary title, one of France’s highest academic distinctions, is awarded to scholars whose work actively promotes French culture around the world. Emmanuelle Pavillon-Grosser, deputy consul general of France in Quebec, formally presented the insignia to Lequin for her work on women’s writing and feminism in Quebec at a ceremony in Montreal on March 30.

“It’s a great honour to be recognized for my work,” Lequin says.

“I’m very touched that my colleagues recommended me. My career wouldn’t have been possible without their collaboration and support.”

From 1983 to 1990, Lequin worked as a lecturer in the Département d’études françaises  and the Simone de Beauvoir Institute. After earning her PhD from Concordia in 1990, she became an assistant professor and received tenure in 1993.

She worked as an associate professor until 2002, when she became full professor. Lequin remained at Concordia until her retirement in 2015.

As chair of her department from 1996 to 2005, Lequin was instrumental in building the master’s program in French literature. She also presided over the hiring of 75 per cent of the current department’s faculty.

“She promoted the equity and diversity of our faculty. She wasn’t afraid to approach the dean, the provost or the president to ensure that the department got what it needed. She worked hard to ensure that its influence would be felt at all levels of the university and beyond.”

In addition to her administrative accomplishments, Lequin worked in various capacities in federal and provincial bodies, such as the Commission de l’enseignement et de la recherche universitaires and the Fédération des sciences humaines. She also sat on the editorial boards of several Canadian and international journals, including Tessera and the Revue des Lettres et de Traduction of the Université Saint-Esprit de Kaslik in Lebanon.

“Lucie’s outreach and impact far exceeded the bounds of the department,” Liakin adds.

‘The lived experiences of women’

The distinction of Chevalier is the capstone to a storied academic career that began with Lequin’s PhD dissertation, which focused on her passion: Québécois women’s writing from 1945 to 1951. Shortly after, she expanded her investigation to include the writing of immigrant women from all continents.

“My work deals with the lived experiences of women writers from a literary perspective,” says Lequin. “I’m interested in how they represent their milieu, whether closed or open, and their views on society.”

Lequin credits her own unusual childhood in rural Quebec for spurring these interests.

Born in the small village of Noyan, Lequin grew up surrounded by immigrants, a situation atypical of other areas of Quebec at that time. The region was predominantly agricultural, and after the Second World War it attracted farmers of different ethnic origins from Europe.

Because her family was not originally from the village, they were treated differently by the locals, and they developed stronger ties with immigrants and Anglophones as a result.

Lequin’s growing political awareness, fostered by her independent working mother, and coupled with her exposure to immigrant stories at home and later at Concordia, drew her to feminism and the writing of immigrant women.

As a retired professor, Lequin continues to pursue her passion. She recently contributed to a book on the writing of Michèle Mailhot that should come out in 2017, and plans to participate in two upcoming conferences, one of which will celebrate the work of Québec writer Monique Bosco.

“I was privileged to work at Concordia,” says Lequin. “I was blessed to have so much support throughout my career.”