What did our universe look like 13 billion years ago? 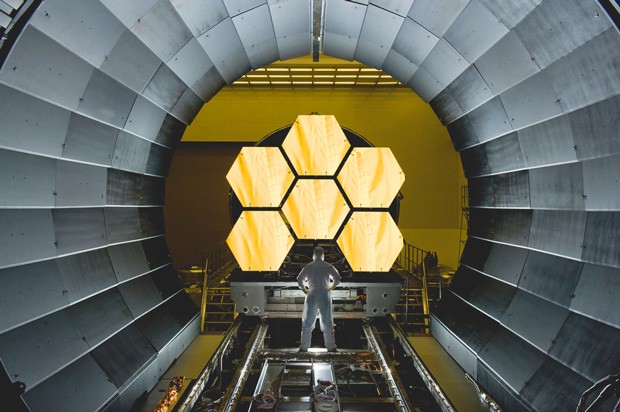 Move over Hubble, there’s a new stargazer in town — and soon, it will be fixing its gaze on the TRAPPIST-1 solar system.

Last fall, NASA announced completion of its decades-in-the-making James Webb Space Telescope. If successful, the gold-coated instrument will permit us to view the universe as it was 13 billion years ago. Yesterday, NASA mentioned that Webb would also be pointed at the newly discovered solar system that just may be home to extraterrestrial life.

The significance of this astronomical news is not lost on part-time physics professor Mario D'Amico. The space specialist teaches the popular “PHYS 284 - Introduction to Astronomy” course in Concordia’s Faculty of Arts and Science.

‘Looking into space is equivalent to peering back in time’

What was so special about the Hubble Space Telescope?

The Hubble Space Telescope — named after American astronomer Edwin Hubble — was the first major observatory-class telescope launched into low Earth orbit (about 500 to 600 kilometres) and the first to include detectors from ultraviolet and infrared range.

Among its many discoveries, the Hubble allowed astronomers to refine the age of the universe from 10 to 20 billions years down to 13.7 billions years. It also helped reveal a subsurface ocean on Jupiter’s Ganymede (the largest moon in our solar system) and a fifth moon around Pluto.

Why is it important to continue looking deep into space?

MD: It’s equivalent to peering back in time. Since light takes time to travel, the farther away an object is from earth, the longer the light will have required to travel to earth.

When we receive light from objects further away, we are seeing them as they were a longer time ago. The further away the object, the younger the images we capture. Looking deep into space reveals how the universe was billions of years ago.

What makes the James Webb Space Telescope more powerful than the Hubble?

MD: The Webb, scheduled for launch in October 2018, has several improvements over its predecessor:

1. Stable orbital zones allow it to remain in line with the earth as it circles the sun

2. An aluminized plastic film serves as a sun screen, keeping it in a stable cold environment

3. A light-collecting area seven times the size of the Hubble’s provides a much larger field of view and enhanced detail resolution

What can we hope to learn from the Webb?

MD: Hubble’s law tells us that the more distant a galaxy is the faster it is moving away from us. This means that the light emitted by these galaxies will be shifted toward the infrared end of the light spectrum.

The Hubble allowed us to see these galaxies as they were at the young age of one billion years old. The Webb will allow us to see farther back into the past to see much younger galaxies.

When will the first images from the Webb be available and what can we expect?

MD: Once launched, the Webb will activate several locked-down components and go through weeks of testing and calibration. The first quality images should appear around three months after launch, and the official science mission will commence around sixth months after launch.

The telescope’s infrared viewing sensitivity is designed to see a special period of the universe’s history, between 400 million years after the big bang (ABB) — when stars are first suspected of being formed — to one billion years ABB.

Images from the Webb will help indicate when the first stars and first galaxies were made and are therefore expected to be as groundbreaking as the Hubble.