One student's quest to break the 'sound barrier' for women 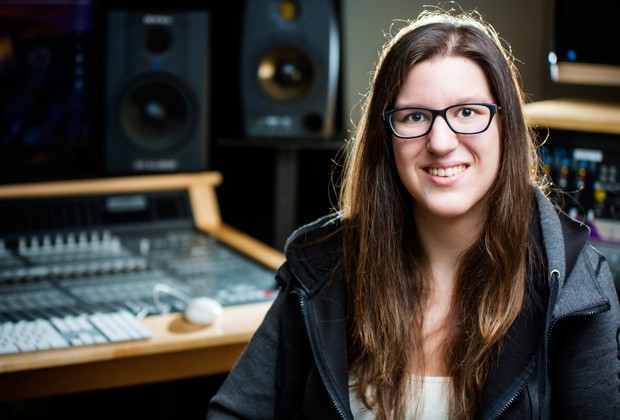 Joanne Mitrovic: “Sound is one of the most male-dominated fields out there.”

Did you know that less than five per cent of sound producers and engineers in the recording industry are women?

It’s a reality not lost on undergrad Joanne Mitrovic, and one she is determined to shake up.

Mitrovic is in her final term of the Electroacoustic Studies program at Concordia. Three years ago, she was often the sole woman in her class. This year, eight women started the program and the overall gender disparity continues to shrink.

“I kept pushing. I wouldn’t let it go. I kept knocking on doors,” Mitrovic says of her campaign to make the program more accessible.

Thanks to her, Concordia is on track to correcting this gender imbalance.

Last year, when a good friend dropped out, Mitrovic decided to stage an intervention. She reached out to Liselyn Adams, then music chair. Adams held a brainstorming session with students and faculty.

“We all agreed that this is a problem, that we could do better. We discussed affirmative action and what plan we could get going by next year.”

‘We could do something’

A culture shift began quickly. Students and faculty members proposed syllabus changes, new ways to encourage female applicants at Portfolio Day and a conference to open discussion around the issue.

Mark Corwin, current music chair, Rebecca Duclos, dean of the Faculty of Fine Arts and Kimberley Manning, principal of the Simone de Beauvoir Institute, became champions of the cause.

“A lot of it is the process of learning who to approach. If you want to get something done you just say, OK, who’s your boss? And who’s their boss? Someone’s going to listen,” Mitrovic says.

Assistant professor of music Eldad Tsabary has guided the ambitious student past many roadblocks. In return, Mitrovic’s passion has expanded his research focus. Tsabary is now in discussions with a publisher to co-edit a book that focuses on the history of women in audio.

“This problem, it’s like a feedback loop," he says. "It started because of gender roles in history. Men were better positioned to establish and grow this field, but women made important contributions right from the start. The shortage of visible role models made it less inviting for many women."

“Joanne has inspired me,” he adds. “Her initiative was eye-opening. I realized we could do something about it too.”

In the classroom, faculty and student sensibilities have begun to change as well.

“When I opened up the conversation, my peers started doing projects on women in the field, just so they were more present in the class,” Mitrovic recounts.

Toward a feminist university

All her hard work peaks this weekend with Loudspeakers: a conference focused on gender and race in audio technologies and music production. The free event takes place on Saturday, February 18 in the Henry F. Hall Building.

“Sound is one of the most male-dominated fields out there. Audio and technology are very linked together, so really, we’re talking about the whole tech culture.”

Before she graduates, Mitrovic will hold her swan song. She and students from her Gender in Sound group are planning to host workshops for high school and college women to improve their sound skills.

“After I helped with Rock Camp for Girls over the summer, I knew that working with youth would improve the electroacoustics program.”

It’s a test for a larger project, planned for next year with Kimberley Manning’s Critical Feminist Activism in Research group (C-FAR). Manning’s six-credit class “The Feminist University Seminar” has set aside five spaces for electroacoustics students to continue Mitrovic’s work.

“All of this is a result of Joanne. She really embodies what I mean when I say we can establish the first feminist university at Concordia,” Manning says.