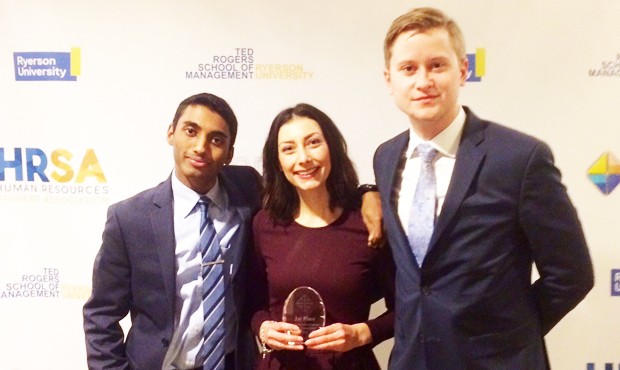 “This year's case was about key leadership positions in management roles at CIBC,” says head coach and advisor Mark Haber.

“The three-person team was mandated to recommend a diversification strategy that includes cross-cultural decision making and the inclusion of women in top management positions at CIBC.”

The achievement was one of two first-place finishes in January for the case competition program at the John Molson School of Business (JMSB).

The Concordia delegation also took home overall gold at the weekend-long 2017 Omnium Financier, hosted by the Telfer School of Management at the University of Ottawa.

Their skills were put to the test in a variety of competition categories, which included academics cases in finance and accounting, financial quiz and stock simulation.

“Our teams’ incredible performances and team spirit earned them the first-place win, ahead of University Laval and HEC Montreal on the overall podium,” says Haber.

The strong showing by the delegation of 30+ competitors and coaches who made up Concordia’s winning teams in Ottawa helped cap off a banner month for JMSB’s undergraduate competition program.

Top performances at the graduate level

JMSB’s MBA students are also enjoying an impressive run this year. In November, they won the DeGroote MBA Case Competition and finished third at the KPG Contest hosted by UQAM. They also brought home second at the 2016 University of Vermont Family Enterprise Case Competition.

Find out more about the John Molson School of Business.