What can artists and neuroscientists learn from each other? 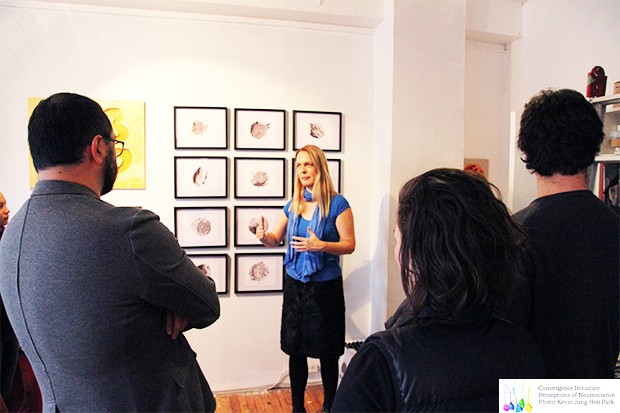 For some artists, talking about neuroscience might be a bit out of their depth. For certain neuroscientists, meanwhile, art represents uncharted waters.

Enter the Convergence Initiative: Perceptions of Neuroscience. It’s a local project that aims to reduce this unfamiliarity through interdisciplinary conversations with arts and science communities in Montreal. Concordia's Faculty of Fine Arts is one of the initiative's principal partners.

On December 11, Shaw and other 10 neuroscientists from the Research Institute of the McGill University Health Centre’s (RI-MUHC) Brain Repair and Integrative Neuroscience Program (BRaIN) went on a White Box tour of some of Montreal’s art spaces.

“This is my first time. I’ve never been to see contemporary art,” said Hunter Shaw, a PhD candidate with the McGill Centre for Research in Neuroscience. “Having someone to explain it and connect the dots, that was huge for me.”

The White Box tour started at the Musée d'art contemporain de Montréal (MAC), where they explored the biennial exhibit, Le Grand Balcon, and spoke with some of the museum’s curators.

The group then moved on to the SBC Gallery of Contemporary Art where they met its director, Pip Day, who showed them around. They discussed the political discourse associated with today’s art scene and the subjectivity of the viewer.

“It’s refreshing. You get to see the work and what the process was. It’s more like an open lab. We see the space, we see how you work. This is something we’re really looking for,” says Cristian Zaelzer, founder and director of the Convergence Initiative.

The tour ended at the Visual Voice Gallery, where the group spoke with owner and director Bettina Forget (a current Concordia graduate student in Art Education). She described her mission of melding science and art together in her work and exhibition space.

“For scientists, their job is to ask questions. As artists, we ask the question, ‘Why?’ Art that makes a connection with science, contextualizes science.”

Forget says that critical inquiry and exploration is a shared quality of art and science.

“The outcomes are different, but I think the starting point is often the same.”

Both are part of a year-long series of events tied to the Convergence Initiative. The community project brings together Concordia’s Faculty of Fine Arts, the BRaIN Program of the RI-MUHC, the Canadian Association for Neuroscience (CAN) and the Montreal General Hospital Foundation.

During the winter 2017 term, Convergence postdoctoral fellow neuroscientists will be partnered with Concordia fine arts students in a course led by professor pk Langshaw, researcher and invited artist, Christine Swintak, and neuroscience and biology advisor Najmeh Khalili-Mahani with the support of Rebecca Duclos, dean of Fine Arts.

They will collaborate to create artworks inspired by neuroscience research that will be curated and exhibited at the CAN annual meeting in May 2017.