From pasta lunches to a talent show, join the fun of Concordia's campaign
|
By J. Latimer 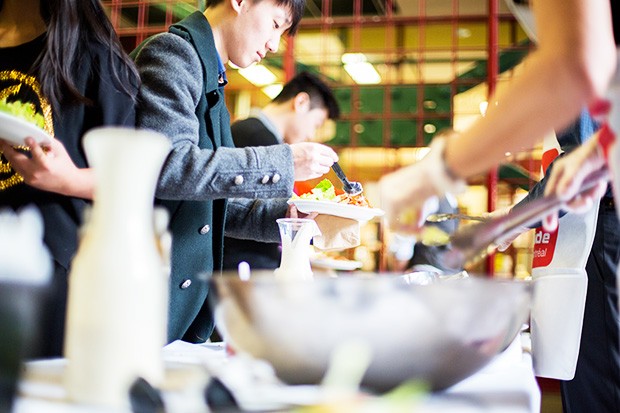 A tribute to Prince? Maybe some Stevie Wonder? These are just some of the choices Fabiola Cacciatore (BFA 07) is mulling over as the musical director of Concordia’s Got Talent, an annual campus fundraising concert for the United Way/Centraide.

“It’s really gratifying to share my skills and raise money for an organization that does so much good,” says the recording artist and executive assistant in the university’s Financial Services. Cacciatore was one of 40 volunteers in 2015 who helped Concordia raise $187,174 — 98.5 per cent of last year’s campaign goal.

October 18 marks the start of Concordia’s United Way/Centraide campaign for 2016.

Only one year old at the time, Concordia was a part of it. More than four decades later, the Concordia United Way/Centraide Campaign is still thriving.

This year, the university is including students in its fundraising efforts, so it’s a full community campaign.

Back by popular demand, there will be a $12 pasta lunch on the Sir George Williams Campus on Tuesday, November 1, from 11:30 a.m. to 2 p.m. in the atrium of the Engineering, Computer Science and Visual Arts Integrated Complex (EV Building).

The pasta lunch on the Loyola Campus will be on Wednesday, November 30, from 11:30 a.m. to 2 p.m. in the Loyola Jesuit Hall and Conference Centre (RF Building).

The third annual Concordia’s Got Talent fundraising concert will be on Wednesday, November 23, from 12 to 1:30 p.m. in the D.B. Clarke Theatre, located in the Henry F. Hall (H) Building.

Other favourite returning events include the 50/50 draw — last year’s winner took home $1,200 in cash. Meanwhile, raffle winners will receive a gift card for Best Buy ($500), Apple ($700) or an espresso machine.

The closing event, raffle and draw will be held on Monday, December 5, in the atrium of the EV Building — check the Concordia United Way/Centraide campaign webpage for further details.