Cabinet Shuffle: who will you appoint? 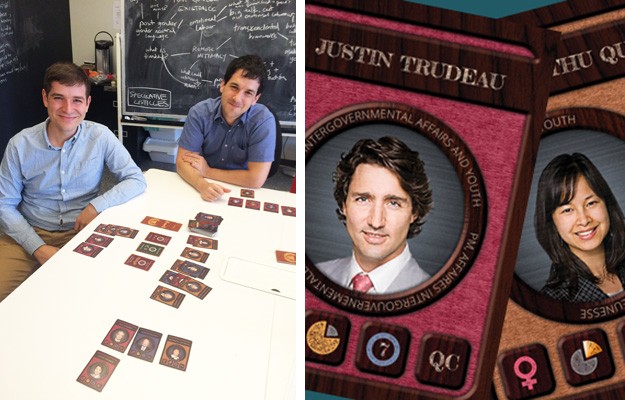 Cabinet Shuffle is the brainchild of Concordia researchers William Robinson and David Waddington.

Next week, Justin Trudeau’s cabinet celebrates its first anniversary. Nearly a year has passed since the prime minister named a young and ethnically diverse cabinet that, for the first time in the country’s history, is equally balanced between men and women.

“It’s a cabinet that looks like Canada,” Trudeau said at the time.

But if he had to do it all over again, would Trudeau give the same weight to gender parity, ethnic diversity and experience in office? Or, knowing what he knows now, would he shuffle the deck differently?

A new card game developed by Concordia researchers allows the PM — and people playing at home — to do just that. But the objective is educational, rather than political. Cabinet Shuffle is the brainchild of Humanities PhD candidate William Robinson, who created the game in collaboration with David Waddington, an associate professor in the Department of Education.

A fun way to ‘encourage discussion about identity and politics’

At the beginning of the game, players randomly draw voter cards to determine the political issues of the match. From there, players take turns drafting minister cards from a public supply, judging each on the kinds of diversity and experience they will bring. At the end of the game, whoever’s decisions matched up best with the voter’s wants wins the game.

Robinson says the game came out of the debates around the 42nd Canadian Cabinet.

“At the time, Trudeau was being accused of sidestepping meritocracy. I wanted to represent how governments choose their cabinets, based on what their constituents want — i.e., what cards come up.”

He hopes that Cabinet Shuffle will encourage discussion about identity and politics, while also familiarizing players with the people who govern Canada.

“When the cabinet members were first announced, it seemed like such an exciting change. My wife said to me, ‘I actually feel like there’s a place for me in politics!’ I want youth to feel that too, and to realize the diversity of representation currently in government,” says Robinson, a member of Concordia's Milieux Institute for Arts, Culture and Technology.

From the playroom to the classroom

For Waddington, that sentiment perfectly reflects the goal of Concordia’s Centre for the Study of Learning and Performance: to develop tools that positively impact both the educational and community sectors.

“I’m fascinated by how people learn through simulations of the socio-political processes — by working through the process for themselves,” he says.

“When people are given the task of undertaking these choices, they inevitably gain a deeper understanding of these processes. The litmus test for this game is going to be to see if it’s more interesting than the regular curriculum. I think the answer will be a resounding yes!”

For now, the game is available free of charge to educators, including middle- and high-school teachers across Canada.

“The next phase of our plan is to develop a lesson plan that allows teachers to seamlessly integrate Cabinet Shuffle into the classroom. We want this to be a useful tool for educators while being a fun break from everyday ways of thinking for their students,” says Waddington.

Will MPs shuffle the deck?

Cabinet Shuffle is easy to learn and fun to play. It looks great, too, thanks to the meticulous design skills of Robinson’s sister, Michèle Robinson. She embraced the concept and created a game that looks as though it could have been produced by Hasbro.

William Robinson says that "if the game doesn’t look good, people will disregard it. Boardgames need to signal their legitimacy right down to the cardstock.”

He and Waddington are keen to see what the reaction will be on Parliament Hill.

“It would be great to see MPs shuffling the deck prior to Question Period, or see them using them as trading cards. In the current political climate, our cabinet members can be just as exciting as baseball players! I hope that excitement is here to stay,” says Robinson.

Attend the Cabinet Shuffle launch on Thursday, October 13, from 5 to 7 p.m. in Room 11.435 of the Engineering, Computer Science and Visual Arts (EV) Integrated Complex (1515 St. Catherine St.). The event is free and open to everyone.