Board reappoints Alan Shepard as president 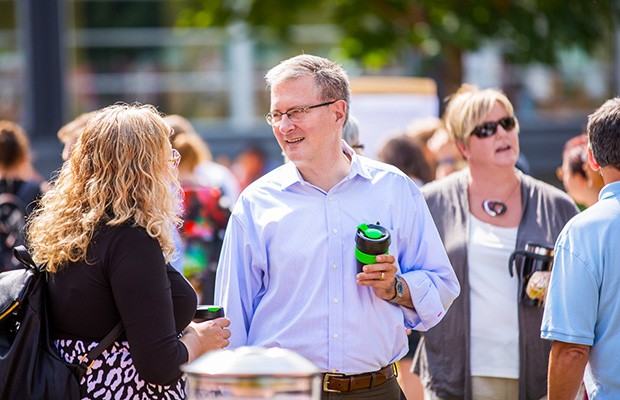 On behalf of Concordia’s Board of Governors, I am pleased to announce that the Board has voted unanimously to reappoint Alan Shepard as president and vice-chancellor for a second mandate.

A thoughtful, strategic, energetic and innovative leader, Alan has positively influenced the advancement of our mission while increasing the university's visibility on the local, national and international scenes.

I would like to thank the members of the Evaluation Committee for the President and Vice-Chancellor for their contribution to the process: Françoise Bertrand, Émilio Boulianne, Jean-Pierre Desrosiers, Hélène Fortin, Alex Macpherson, Ted McCormick, Alex Ocheoha, Maria Peluso, Johanne Sloan, Ted Stathopoulos, Terry Wilkings, and Danielle Tessier serving as secretary.

Under Alan’s leadership, stability has returned to Concordia, and equally important, the university has been gaining in strength and reputation. He has spearheaded a strategic directions initiative that has engaged our community in thinking and talking about our future as a next-generation university. Our nine directions, developed through this process, set the course for some exciting times ahead.

I look forward to working with Alan in the years ahead, and building upon the significant momentum he has created since becoming president. He begins his second five-year term on August 1, 2017.

Please join me in congratulating Alan.

Norman Hébert, Jr.
Chair, Concordia Board of Governors
Chair, Evaluation Committee for the President and Vice-Chancellor

Board of Governors Alan Shepard administration