OPINION: The Indigenous future is your future 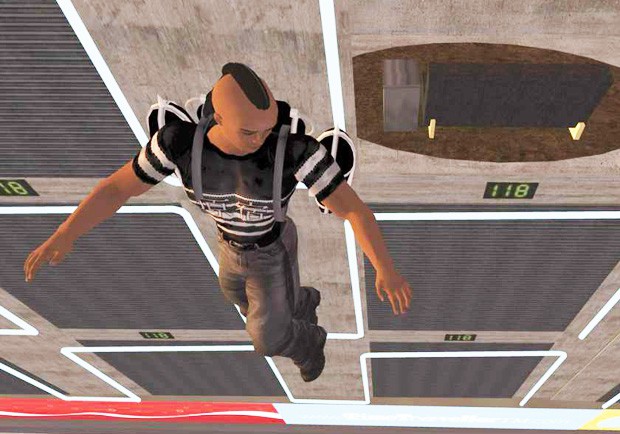 Hunter Hovers in Front of the Storage Locker He Calls Home, a production still from a TimeTravellerTM animation, by Skawennati. | Image courtesy of Skawennati

Jason Edward Lewis and Skawennati are the co-directors of Aboriginal Territories in Cyberspace (AbTeC), a research network of artists, academics and technologists investigating, creating and critiquing Indigenous virtual environments. Lewis is also the director of the Indigenous Futures research cluster at Milieux Institute for Arts, Culture and Technology at Concordia.

This op-ed was originally published in the Montreal Gazette.

We started reading science fiction as teenagers. We fell in love with the fantastic worlds, the strange societies, the alien cultures, and the amazing technologies. As we got older, though, we began to notice the lack of Native people in those futures. In fact, there were barely any non-white people at all.

The lack of images of us in science-fiction told us pretty clearly that there was no room for First Nations in the exciting futures being imagined by writers and artists, and being built by scientists and engineers. Today, several decades later, we work with Indigenous youth who recognize that the dominant culture still doesn’t see a future for them. In our conversations with them, and in the academic research literature, we can see the connection between this erasure and the tragic statistics that plague First Nations: highest dropout rate, highest incarceration rate, and, as has become painfully highlighted recently, highest suicide rate.

Kiowa author N. Scott Momaday wrote that the “greatest tragedy that can befall us is to go unimagined.” A great tragedy has already befallen Native people. We live in a society defined by greed for the land and its resources, hate for our cultures, and genocide of our peoples. This fact undermines any notion that settler Canadians live in a society that is fair and just for all. It is a foundation that poisons every institution that grows from it. Neither apologies nor reconciliation will rectify it.

To replace this damaged foundation we must imagine deeply anew. We use the term ‘future imaginary’ to describe the ideas that commonly come to mind when we think about the far future, things like jetpacks, designer genes, and intergalactic travel. The Initiative for Indigenous Futures (IIF) was developed as a catalyst and a forum for our communities to populate the future imaginary with Native people who are present, vital, and in charge of our own destinies.  It is imperative that First Nations imagine how our cultures will grow and evolve, sustaining continuity with the past while exploring new cultural configurations that will enable us to not just survive, but to thrive.

IIF conducts this work by instigating, encouraging and supporting art that illustrates alternative Indigenous futures; through public presentations by thinkers and makers who are actively imagining the future of everything from Indigenous governance to food sovereignty to language; and through workshops with Indigenous youth that develop the skills and confidence to build a future in which they see themselves.

Settler society must imagine a new relationship with us that is based on more than just apologies. Learn the treaties, which both our peoples signed, but only we taught to our children. When you know them, you will understand that us Indians are not asking for ‘free’ stuff; rather we are demanding that we be paid what we are owed. When you see how your religious and legal frameworks, brought with you from Europe, cheated our people out of our humanity, you will understand our anger. When you look at even a fraction of the letters of appeal, land claims, and lawsuits we have pursued to little avail for hundreds of years, you will know why we are exasperated.

Furthermore, it is not our job to educate you. The Royal Commission on Aboriginal Peoples report was published 20 years ago. The Truth and Reconciliation Commission criss-crossed this land for the last seven years. Our thinkers have been writing about this history for decades, our artists have been making artwork about it for even longer. In 2016, with Google at your fingertips, not knowing this history can only be due to your willful ignorance. Educate yourself, and then, please, educate your children.

For 500 years we have refused to be assimilated. We will refuse for the next 500 years. What is more, we are imagining the next five hundred years as a time when our people will assert themselves as primary actors in the evolution of Canadian society. We are busy building that future. Imagine that.

Find out more about the Department of Design and Computation Arts.