Rattlesnakes, word creatures and PoEMMs you can touch 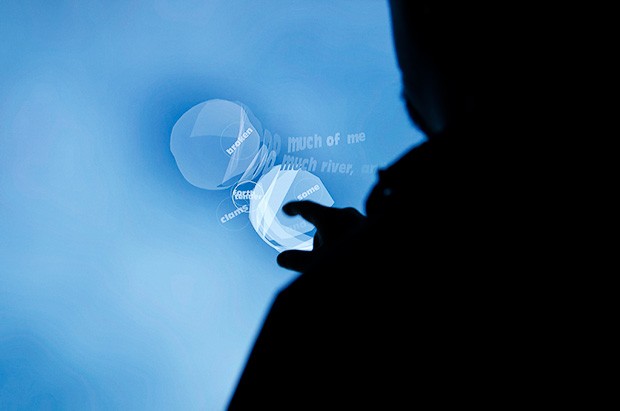 Keen to celebrate Poet's Day in more than one way? Read an excerpt from Stephanie Bolster's Long Exposure: The Address.


Jason Edward Lewis, a professor in Concordia's Department of Design and Computation Arts, was frustrated with the physical distance of the electronic reading experience — so he decided to take matters into his own hands.

"People have a personal connection to their mobile devices that is much rarer for their desktops or even laptops; if you design your apps well, you can leverage that connection," Lewis says.

We asked him to fill us in on the details.

There are eight apps. They are all touch-activated. The way you interact with each one, though, is different.

One, What They Speak When They Speak to Me, requires that you touch a single letter, and then, as you move your finger, it pulls together all the other letters and words from a specific line of the poem.

Another, The Great Migration, requires you to use your finger to "capture" these creatures constructed out of words and lines.

A third, The Summer the Rattlesnakes Came, requires you to reveal words to a text by gliding your finger over the screen. You have to watch out, though, because as you progress, hunting for snatches of the poem, rattlesnakes composed of text will strike at you from the edges of the screen.

What is its intended goal?

My goals were several. I wanted to explore a number of different strategies for having the reader use touch to read a poem; I wanted to develop a software library (NextText) to make it easy for other creators to implement and experiment with those strategies; and I wanted to create a "digital-born" vernacular for interactive texts that produced poems that had to be read onscreen in order for their full expressive affect to be felt.

And, above all, I wanted to create poetry that would move the reader in some way — emotionally, intellectually, politically.

I had been frustrated for some time with the development of electronic literature, and one point of frustration was the conventional keyboard-mouse-screen configuration.

It felt physically distant, with the awkward triangle between the three, as well as impersonal and utilitarian, given the general-purpose nature of the standard workstation. It wasn't comfortable, it wasn't focused — and it wasn't intimate, in the way I felt writing and reading poetry required.

We prototyped What They Speak When They Speak to Me in 2005, and showed it in an exhibition for the first time in 2007. But working with those early touchscreens was hard work, as the hardware was glitchy.

When the iPad came out in mid-2010, I realized that was really the right form factor. People have a personal connection to their mobile devices that is much rarer for their desktops or even laptops; if you design your apps well, you can leverage that connection.

It's Poet's Day today. Which poets do you favour? And what poem do you quote most often?

This, from T.S. Eliot's The Lovesong of J. Alfred Prufrock:

And indeed there will be time
To wonder, "Do I dare?" and, "Do I dare?"
Time to turn back and descend the stair,
With a bald spot in the middle of my hair —
(They will say: "How his hair is growing thin!")
My morning coat, my collar mounting firmly to the chin,
My necktie rich and modest, but asserted by a simple pin —
(They will say: "But how his arms and legs are thin!")
Do I dare
Disturb the universe?
In a minute there is time
For decisions and revisions which a minute will reverse.

I grow old ... I grow old ...
I shall wear the bottoms of my trousers rolled.
Shall I part my hair behind?   Do I dare to eat a peach?
I shall wear white flannel trousers, and walk upon the beach.
I have heard the mermaids singing, each to each.

I do not think that they will sing to me.