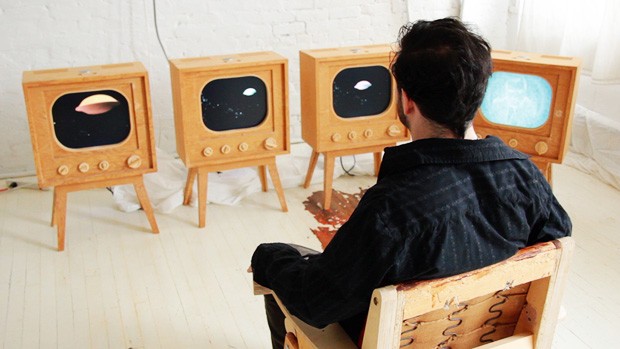 “All of these people are highly qualified and interesting artists in their own right,” says Lorraine Oades. “They have incredible skills, many of which they have learned at Concordia.” | Image courtesy of Lorraine Oades

Lorraine Oades is a part-time faculty member in the Department of Studio Arts who teaches in the Intermedia program. As an artist and educator, she works with electronics, sound, video, sculpture and installation.

Here, Oades tells us why and how she created an interactive installation inspired by 1950s flying-saucer films.

Captain on the bridge

They do so by playing a theremin, an early electronic instrument developed through Russian government research into proximity sensors. Viewers control the theremin, which is built into a customized armchair, by raising their hands above sensors built into both arms of the chair.

One hand controls video images and sound, which are played across four 1950s-style custom-made television consoles, while the other hand controls the speed and direction of the video footage.

The 1950s mark an extraordinary time in human history. Sandwiched between the Great Depression, World War II, the Holocaust and the Cold War, they are indelibly scarred by the occurrences that flank this era.

The 50s arrived on the coattails of the war, where for the first time in history aerial bombings took place on a massive scale, leaving world capitals in ruins and an inconceivable number of human casualties estimated into the 80 millions.

This unimaginable state of affairs was radically intensified by two unspeakable factors — large-scale genocide in Europe and the detonation of the first hydrogen bombs. 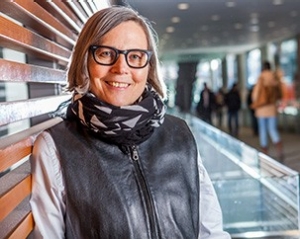 These events cumulated in the rising fear of communism in the Cold War era, exemplified by McCarthyism and the House of Un-American Activities Committee, amidst fears of global annihilation.

Less apparent, though equally significant, was the rapid introduction of technology into the average North American household due, in a large part, to manufacturing processes developed by the war industry.

By the 1950s, the car, telephone, television, electric toaster, washer and dryer, refrigerator and portable radio became ubiquitous household items at an almost alarming rate, moulding into place the concept of the modern nuclear family.

It is striking that in the wake of these events, flying-saucer films retain a naïve, unsullied quality that is indicative of the 50s era.

Emphasized by crude production values and low-budget special effects, they convey a sense of innocence. Sometimes referred to as First Contact films, saucer movies almost always take place in the present, are often situated on earth and, possibly for budgetary reasons, represent aliens with human-like qualities.

By the early 1960s saucer films all but disappear, but the basic fears associated with them — world annihilation, destruction of natural resources and the overwhelming impact of technology in general — are equally pressing today.

While First Contact addresses these issues and references the significant social and political events that brought them into being, it is also meant to engage the viewer in a uniquely creative and immersive experience.

The artwork is located in the black box gallery at La maison de la culture Notre-Dame-de-Grâce, which is a multipurpose space equipped with a professional lighting grid.

When viewers enter the gallery, the first thing they see is a video projection of meteorites hurdling through the solar system, intermittently mixed with images of 1950s electronics and appliances. 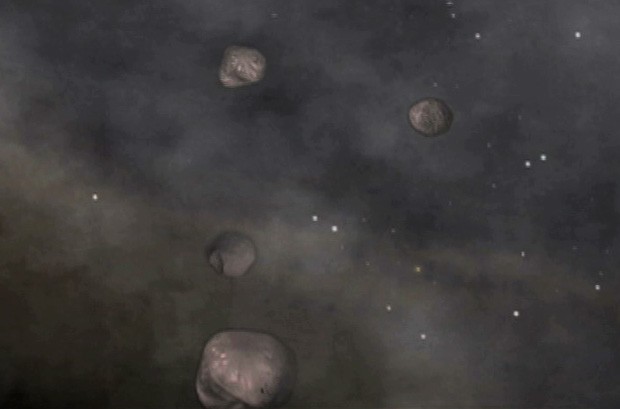 I received funding from the Canada Council for the Arts and the Concordia University Part-time Faculty Professional Development to produce the main components of this artwork and to help offset some of the installation costs.

This money has allowed me to undertake a large project and work with others from Concordia and the Montreal arts community.

Martin Peach, electronic arts technician, who works with students at Concordia in the Intermedia program, designed the electronics and programming, and Andreane Gagne helped to create and produce some of the animations early on.

I am also working with two graduate students, Tim Belliveau, who helped me compile more recent 3D animation models, and Bogdan Stoica, who, along with undergraduate student Pamela Simard, has been invaluable in helping build the installation.

I regularly work with alumnus Matthieu Sabourin, MFA 11, as a studio assistant. He helped with many aspects of this project that include working with Bogdan and Pamela on the installation, helping to design information cards, translating, aiding me with upholstery and much more.

All of these people, and a few others, are highly qualified and interesting artists in their own right. They have incredible skills, many of which they learned at Concordia, and I am truly fortunate to be working with them.

Montreal has a dynamic arts community, and digital arts is an important part of its legacy.

While I consider myself to be more of an artist who works with digital media than a digital artist per se, I have definitely been influenced by the richness of this community and am proud to be exhibiting alongside some of these practitioners in the BIAN.

After this project I am having a nap. I am also currently working on another large-scale project, Beacon, which consists of a series of illuminated cast objects programmed to create shifting patterns of light and text. I am working with Martin and Matt on this project as well. After the nap we will get back to that!