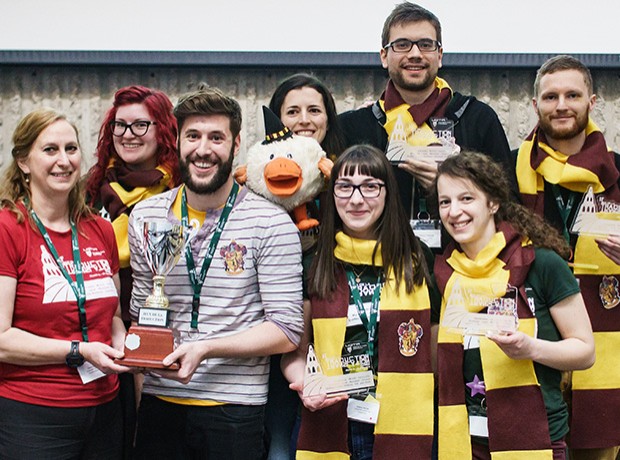 “There's something about spending time with people who are all really enthusiastic that makes you want to get better,” says Concordia team member Max Meade. | Photo by Jacques Boivin

The trophy returned home to the Département d’études françaises after Concordia’s team won first place, for the third year in a row, at the 11th Jeux de la traduction, held from March 11 to 13, at Université du Québec à Trois-Rivières.

“It’s the fourth time we’ve won La Coupe for the team events, and it’s our third consecutive win. Plus, we took home four individual honours,” says Christine York, senior lecturer. “The accompanying professors, like myself, mark the translations collectively, so it’s a great experience to see how other people work. There was a lot of debate!”

From comics to song lyrics

The translation tasks were an eclectic mix of song lyrics, comic strips, advertisements, and audiovisual clips, such as a scene from the popular television show Mr. Robot. There were also technical specifications and economic briefs to translate. Team members had to park their bilingual dictionaries at the door.

“One of the individual translations into French was a section of a novel, Fatal Voyage, by [Concordia honorary doctorate] Kathy Reichs," says Jean-Philippe Thériault, a third-year translation (English to French) student.

Thériault earned fourth place in this category and was one of three team members from Concordia's Institute of Co-operative Education.

As well as enjoying some healthy competition, the teams got a taste of what it would be like to work in the field.

“For one of our challenges, we had to pretend that our team was a translation agency,” says second-year translation student Jessica Ascher, who won second place for individual literary translation into English.

“We received a text to translate from an imaginary client. Two project managers divided the work between two translators and two revisors, who did terminology research in the meantime. The imaginary client threw us a curve ball halfway through by adding and removing some text. It was stressful, but we ended up submitting the text on time.”

All participants appreciated the chance to network with prospective employers and bond with fellow translators.

“There's something about spending time with people who are all really enthusiastic that makes you want to get better,” says Concordia team member Max Meade. “It's always interesting to see the different ways that a single text can be translated.”