Concordians weigh in on the merits of pursuing a degree in the humanities and social sciences
|
By J. Latimer 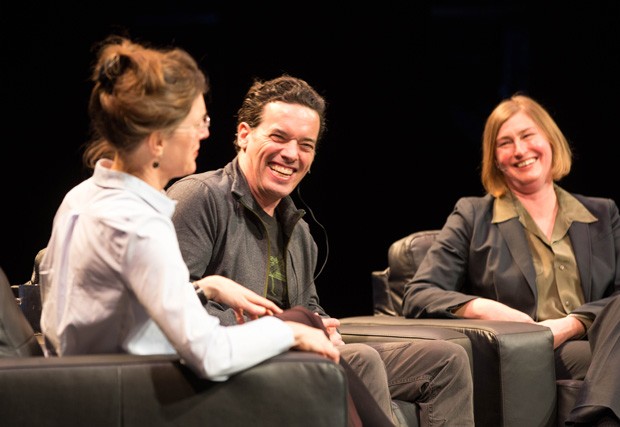 “I think one of the values of the liberal arts education is being able to live with ambiguity,” says Rebecca Duclos, dean of the Faculty of Fine Arts, seen here in discussion with Joseph Boyden and Jill Didur at Thinking Out Loud.

Maybe you suspected it all along, but now there’s research indicating that a liberal arts degree is a valuable investment.

Using tax records from University of Ottawa graduates, the Education Policy Research Initiative (EPRI) recently found that social sciences and humanities graduates enjoy steady increases in earnings — starting at an average of $40,000 right after graduation and up to $80,000 only 13 years later — similar to the average earnings of math and science graduates.

“Our students do very well for themselves,” he says. “They aren’t racked with doubts and concerns — quite rightly, because they’ve gone on to be ambassadors, Rhodes scholars, business owners, television producers in San Francisco, Toronto Star journalists, lawyers in New York. In the last municipal election alone, we had three graduates on city council. They have a breadth of concerns and interests; that’s attractive to employers.”

The new study, announced by Universities Canada, came on the heels of Concordia’s Thinking Out Loud public conversation on March 7, when award-winning author Joseph Boyden joined Rebecca Duclos, dean of the Faculty of Fine Arts, and Jill Didur, associate professor in the Department of English, to discuss the meaning and importance of a liberal arts education.

Here are some highlights from the Thinking Out Loud event:

They had that opportunity and that has really transformed how we understand liberal arts education.They brought a different constituency into the university. Those students demanded a diversification of the curriculum in the liberal arts program … courses in what I later came to specialize in, like post-colonial studies. Since that time, these are the kinds of courses students clamber to get into now.

Rebecca Duclos: I think one of the values of the liberal arts education is being able to live with ambiguity, to have the capacity and the confidence to live with unknowns while trying to make sense of it and live with the fact that you might not be able to make sense of it right away… Students in the Faculty of Fine Arts — you aren’t going to get rich. But there's the sense of life passion driving their decision. Artistotle says the liberal arts are about excellence, but even he struggles, asking ‘is it an intellectual training? Is it a moral training?’ Then he talks about using one's mind well, and using leisure time well, to be a full citizen of the world. That's part of the liberal arts training — how to use slow times.

Joseph Boyden: Who would vote for Donald Trump? Certainly not someone with a liberal arts degree [joking]. … A liberal arts education is a leap of faith. It’s a choice to go to school to try to become a better person and understand the world better. For me, it was a given. It was the idea that I didn’t really know where my life would take me, but I wanted the freedom to move around. I'm very much the romantic that way — the whole Jack Kerouac school of thought where I hit the road and went to graduate school on a motorcycle with what I could carry in my saddlebags, literally.

Jill Didur: There's a need for flexibility and it's that kind of training that a liberal arts or humanities degree can cultivate in students.

My daughter is at the age where she's wondering about her future education and I gave her a liberal arts pitch, saying we don't know what the job market's going to look like by the time she's at the stage of looking for a full-time, long-term position. So she wants to learn as much as she can about a variety of things, to discover what motivates her.

In Marilynne Robinson's article in Harper's Magazine (March 2016), “Save our Public Universities,” she talks about the value of liberal arts education, despite the push toward practical training that's dominating the discussion in education circles these days.

Robinson names this problem of having to put an economic value on every skill that every student acquires at the university. It reduces education to training, as opposed to exploration and innovation. It's a hidden secret that a liberal arts degree actually trains you to be an excellent communicator, critical thinker and writer. These are the kinds of skills that many businesses will always need.

Joseph Boyden: My father was a doctor, my mother was a teacher. I’m one of 11 kids. All of my seven older sisters are teachers. My two younger brothers are firefighters. The oldest brother — the shame of the family [laughing] — is a lawyer. He teased me about taking underwater basket weaving courses at university, but I laughed it off.

Before that, I had been kicked out of Catholic high school and sent to Toronto’s Alternative Independent Study Program. It changed my life. I would’ve dropped out of school, otherwise. It allowed me to see the world through a different lens and suddenly it wasn’t a chore to go to classes. I saw options. … The thing I value most is the agility you get from a liberal arts education. You need it today. I recently wrote a ballet for the Royal Winnipeg Ballet and it’s that kind of agility and leap of faith that my education prepared me for.

Register for the free event, Thinking Out Loud: Being Instrumental - A Conversation About New Directions in Performance Creation, taking place on Wednesday, March 30, from 2 to 4 p.m. in the D.B. Clarke Theatre (1455 De Maisonneuve Blvd. W.).

It features theatre artist Robert Lepage in conversation with Silvy Panet-Raymond, a professor in the Department of Contemporary Dance, about his own creative process and views on new directions in performance creation.

What does the development of a new Performance Creation program at Concordia mean for contemporary dance, music and theatre education?

Read about Concordia graduates who found interesting and fulfilling careers with degrees in the humanities and social sciences.