Quadcopters! And other toys of the future 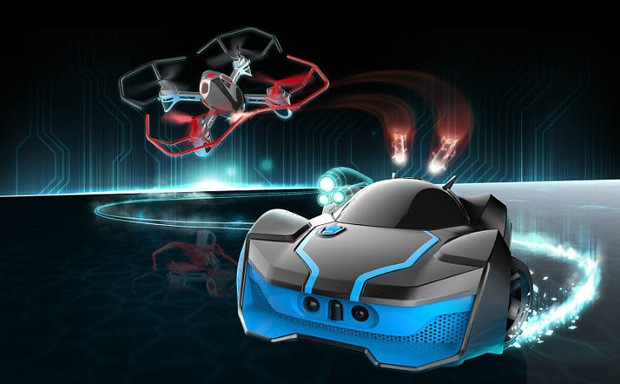 This article was originally published in The Globe and Mail.

As an expert in flight dynamics, control and automation systems, Luis Rodrigues has applied the aerospace research conducted in his avionics laboratory at Concordia University in Montreal to a wide range of projects, from designing flight simulators and developing autopilots to optimizing the fuel efficiency of aircraft.

And when a call came in June from the Montreal office of WowWee Inc., a Hong Kong–based toy company, asking whether the Concordia researchers and students could work on the control system for a robotic drone, Rodrigues was game.

“We had a perfect match,” recalls Rodrigues, an associate professor in the university’s Department of Electrical and Computer Engineering.

Soon he and his fellow researchers, who are part of the Concordia Institute of Aerospace Design and Innovation, were working with the R&D team at WowWee Canada on a four-rotor drone, called a Hong Kong's WowWee Inc. teamed up with Concordia researchers to develop a 'quadcopter' designed to chase its remote-controlled cars.

For example, drones are typically unstable and require deft hand-eye coordination to keep them flying. Thanks to the flight algorithms developed by the Concordia team, the WowWee quadrotor would hover effortlessly above the moving car.

The toy, called "R.E.V. AIR quadcopter," which was announced at the mega Consumer Electronics Show in Las Vegas in January and will be on the market by May, shows how aerospace engineering can find its way into some surprising places.

“We’re looking at all kinds of cool robots. There are applications we haven’t even begun to scratch the surface of,” says Davin Sufer, chief technical officer of WowWee, which specializes in tech toys and consumer robotics.

Sufer was looking for academics working in aerodynamics and flight controls and got in touch with Rodrigues through a list provided by Mitacs.

The organization is supporting the project at WowWee, as well as funding an internship position at the company for Michael Di Perna, a graduate student studying for a master’s of science in electrical engineering at Concordia. 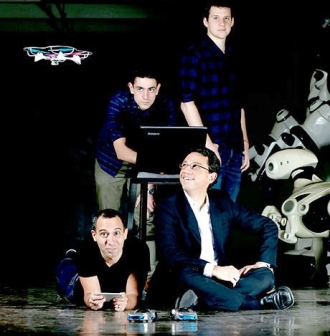 Sufer, who is in charge of the company’s worldwide R&D and product-development efforts, has established partnerships with other academic institutions, such as the Georgia Institute of Technology in Atlanta and the University of California, San Diego.

The goal of such partnerships, he notes, is to “surpass what’s being done in the toy industry” and be able to mass-produce robust robotic toys at reasonable prices.

“We have to really capture people’s imaginations by making the impossible happen, and we need to bring really advanced stuff into our products to hit that bar,” Mr. Sufer explains.

“However good the engineers are in our company, we still don’t know everything about every last system and every last theory out there in the world of technology. Universities really give us a way to access something new that hasn’t been done before, because no one has commercialized the academic effort.”

Rodrigues says this type of collaboration is critical to the invention and perfection of the robotic toys of the future. “You need algorithms and you need methodology in place to be able to program the robot to do something.”

In the case of the R.E.V. Air quadcopter, Sufer says that enabling its quadrotor to fly itself requires a navigation mode that works in a cluttered indoor environment, like a home.

To address this need, WowWee developed an infrared sensor system, which dramatically reduced the cost compared with expensive cameras typically found in such devices.

But it needed the Concordia researchers such as Mr. Di Perna to develop advanced controls, so the quadrotor could maintain its position and altitude in real time.

Future considerations include the maximization of the drone’s energy, Rodrigues notes, in order to extend its “mission time,” as well as synchronizing multiple vehicles, so they don’t collide.

Such research produces what he calls “deliverables” for engineers. “It’s not going to just stay on paper and in simulations; we’re actually going to build something,” he says. “In fact, it has been built and is flying.”

Indeed, in just a few months, Rodrigues and his team finished the design and implementation of the algorithm for the R.E.V Air.

A prototype was successfully demonstrated at the Toy Industry Association fall preview show in Dallas in October.

The collaborative work with WowWee has been fast-paced and rewarding, says Rodrigues, who is currently also developing autopilots for commercial aircraft.

He says the two areas of research are somewhat related. For example, making the quadrotors fly in such a way that they minimize battery use has parallels with designing a jet-propelled aircraft to minimize fuel consumption.

“The objectives are the same.”

Moreover, direct applications in the real world for R.E.V. Air technology could include a police drone following a suspect’s car.

“It would be outdoors and the sensors would be different,” says Rodrigues, “but the methodology to follow the car and the algorithm would be the same or similar.”

For engineers, fundamental research is critical to practical applications.

“It’s a combination of both that’s important,” he explains. “You start by developing some theory or some methodology with the view of applying it to a given problem, but you only get a chance to apply it to the problem once that theory and that methodology are solid.”

According to Sufer, the ultimate success of robotic toys such as R.E.V. Air will always go back to math and physics.

“That’s the basis of all of this. You can’t fake it ... There are no shortcuts,” he points out, noting too that the collaboration with Concordia is ongoing.

“It’s one thing to dream something. The issue is how we make it happen.”

Find out more about Concordia's Department of Electrical and Computer Engineering.

WowWee's chief technical officer, Davin Sufer, and Concordia's Luis Rodrigues explain what it's like to commune with robots.

Are consumer robotics the wave of the future?

Rodrigues: I think so. Computers used to be big machines that started in research centres, and today everybody has two or three gadgets at home.

That same evolution is going to happen in consumer electronics. We have big robots in plants assembling cars, and now we’re getting smaller and smaller robots and we’re able to interact with them. That is really going to change the future.

Sufer: Robots are going to take a more interesting and deeper role in our day-to-day lives. I think they’re going to be part of our homes. Also, we will have robotic products that are there to entertain or for companionship and just for fun, really.

Is true human-robotic interaction still the stuff of science fiction?

Rodrigues: There’s a long path still to be followed, because the robots today are still not so user-friendly.

Sufer: I think that science fiction really sets the stage for some wonderful — but also some awful — things happening.

We’re keeping what we’re doing on the fun side of the spectrum. We’re looking for entertainment and interactivity and capturing people’s imaginations through interesting gameplay.

How can partnerships between industry and university researchers make this happen?

Sufer: [University researchers] are often deep into theory. We give them a forum in which they can take that theory and apply it to a problem with a deadline and real-world constraints, numbers and values.

You develop some algorithms for navigation and control. Then you get the chance to apply those. Then you learn from the application that certain things you had assumed would happen don’t necessarily happen.

One feeds the other. That’s what engineering is.

An engineer understands the phenomenon and designs things. And then you build the prototype and you test it. And from the testing, you learn more, develop more theory and test again. This keeps going as a cycle.

Sufer: These researchers ultimately see a real outcome when they solve the problem. And instead of a graph or a study, they see something flying in the air or chasing a ball or doing something fun and interesting.