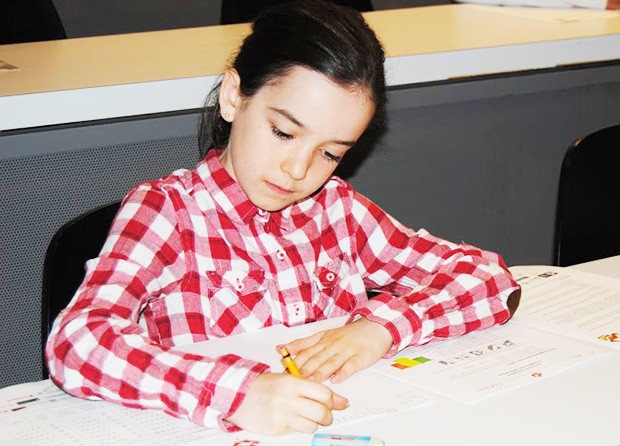 Allison Tsypin is participating in the Montreal Math Circle. She spends Sunday mornings exploring logic problems, Dirichlet's principle and geometry, among other things.

Hosted by Concordia, in a joint project with l'Institut des sciences mathématiques (ISM), the Montreal Math Circle is a self-funded, independent enrichment program for young students — grades three to eight — interested in solving math problems at their school level. After two successful pilot sessions last fall, a third held in January and the fourth will start on February 21 and run until March 13.

Facilitated by Alina Stancu, associate professor in Concordia’s Department of Mathematics and Statistics and ISM director, and run by PhD candidate Ildiko Pelczer, Math Circle divides students into three groups according to age and grade. On average, there are 10 kids per age group — half are girls, in the younger sections.

They work individually and collectively on the same problems during the 90-minute, Sunday morning sessions led by Pelczer.

Montreal Math Circle is just one of four math outreach initiatives by Concordia. Another is the Canadian Math Kangaroo Contest, a 20-year-old worldwide math competition that debuted in Canada in 2001. Anna Sierpinska, a Concordia professor who specializes in math education, initiated hosting the contest at Concordia in 2012. Since then, she has remained involved, and the contest’s hosting is organized by Pelczer and department administrator Jane Venettacci.

The registration deadline for the next Kangaroo contest is March 7, for the March 20 event. Over 200 students are expected.

The next tournament is scheduled for February 28. It will be held on the Sir George Williams Campus. To register, email each student’s name and school grade to montrealmathclub@gmail.com by February 23.

The fourth outreach initiative is the International Mathematical Olympiad Formula of Unity/The Third Millennium for students from grades six to 12. Organized by the Saint Petersburg State University and the Euler Foundation, it was first held in the 2013-14 academic year. During the 2014-15 edition, it gathered more than 6,000 students from 15 countries.

It takes place in two rounds. The second round — which invites students who received the best results in the first round — will be held on February 21.

To register your child for the next Montreal Math Circle session, which runs from February 21 until March 13, email montrealmathclub@gmail.com, indicating your name, and the name and school grade of your child.

The next Canadian Math Kangaroo Contest takes place on March 20. Register your child by March 7.

The next Tournament of Towns contest is February 28. It will be held in Room MB-1.437, John Molson Building (MB), Sir George Williams Campus. The four-hour contest starts at 11:30 a.m. To register, email each student’s name and school grade to montrealmathclub@gmail.com by February 23.