Online connections and the search for happiness: University of the Streets is back 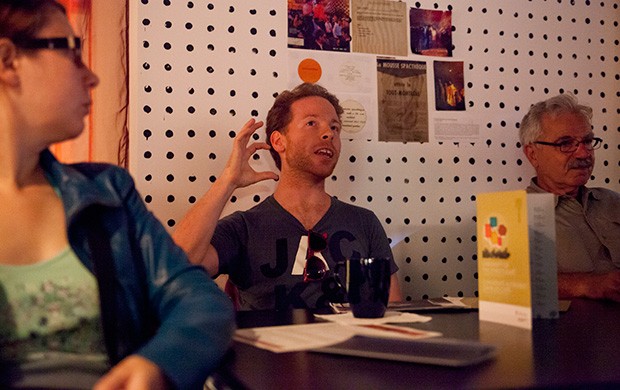 A group of strangers gets together in a public space to talk about current topics, share stories of personal success and failure, and ask each other hard questions about life.

Concordia’s University of the Streets Café public conversation series begins its winter schedule on Thursday, February 18. The talks aim to encourage forms of introspection and empathy that are hard to come by in our daily lives, especially the parts lived online.

Offered through Concordia’s Office of Community Engagement, University of the Streets Café is an extension of the university’s longstanding commitment to work with communities beyond its campuses.

“The program recognizes the value of lived experiences and lifelong learning,” says Bram Freedman, Concordia’s vice-president of Advancement and External Relations, who oversees the Office of Community Engagement.

“The decentralized pedagogical approach of our public conversations has time and time again opened up Concordia to community members eager to build connections, share experiences and learn from one another.”

Freedman says University of the Streets Café helps the university to fulfill its mandate to “embrace the city” and evolve as a future-facing institution.

Alex Megelas, the program’s new coordinator, has attended conversations for the past eight years, moderating or serving as guest at 20 of them.

“This seemed exactly what I needed to be doing right now. It’s been a lot of fun to be a part of,” Megelas says.

Most University of the Streets Café conversations are two hours long and are held more or less weekly in coffee shops and community spaces across Montreal.

“Through our spaces, participants get a chance to grapple with important issues. They are able to hear expert perspectives and are encouraged to make sense of the topic through dialogue,” he says.

Megelas says that in his experience, the common threads people discover in conversation help break isolation and inspire personal connections.

“This doesn’t mean that friendships are automatically created or that new community projects will emerge — though both have happened — but at the very least, participants have been able to experience their collective shared investment in an issue and to experience commonalities with people with whom they share a city.”

‘You don’t need a PhD to have an opinion’

Former University of the Streets coordinator and longtime participant Elizabeth Hunt has spent years evaluating the merits of public conversations.

“Conversations and dialogue are about critical consciousness. How are we making sense of the world around us?” she says. "It’s about allowing people to share their stories, have their ideas challenged and challenge others’ ideas."

The value of public conversation hit Hunt personally when her father was invited to speak as a guest. A lifelong blue-collar worker at the Port of Montreal, he had fallen sick with cancer. Hunt says her father, who has since passed, appreciated the opportunity to share his experience with cancer and see it resonate with those who had congregated at the café that day.

“That was kind of a game-changer,” she says. “For me that was for the first time I emotionally connected with the program.”

The conversations aren’t so much about the invited moderators or guests, she says; but about providing average people the opportunity to practice listening, as well as articulating their thoughts.

“You don’t need a PhD to have an opinion. That’s the potential of conversations — the guy with the story is so much more interesting.”

The 2016 winter series opens at the Atwater Library and Computer Centre on Thursday, February 18. Moderator Linda Overing will invite Andrew MacLean and Shanly Dixon to discuss “Connecting online: Is the Internet a useful space for dialogue and deliberation?”

Check out the entire winter 2016 schedule of public conversations

Monday, April 11
Living in a global world: What does it mean to be a global citizen?
Moderator: Vijay Kolinjivadi
Guests: Shelina Adatia and Asif Aly Penwala
Location: Burritoville (2055 Bishop St.)