This Concordia-Trudeau airport project aims to weather the winter storms
|
By J. Latimer 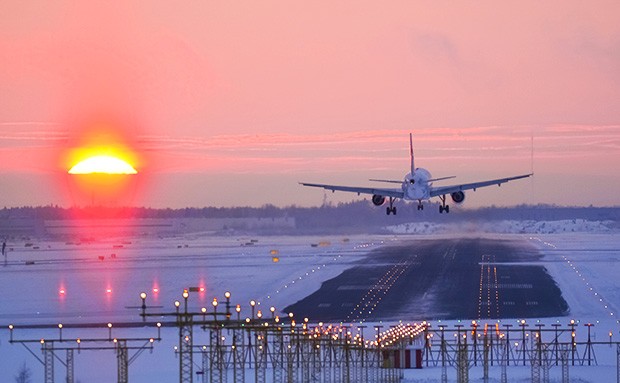 Imagine that a snowstorm is coming and your flight to New York is scheduled to take off in 40 minutes. Will it be delayed or flat out cancelled?

If you’ve encountered this aggravation, you’ll be happy to learn that a team of students from Concordia’s Department of Mechanical and Industrial Engineering feels your pain. To help solve the problem, they created an algorithm to reduce flight cancellations by 60 per cent in a simulation of storm conditions.

It was their prize-winning Capstone engineering design project — the final assignment that all undergraduates studying in Concordia’s Faculty of Engineering and Computer Science must complete in order to graduate.

“As a reference point, we used data from the Montréal-Trudeau Airport during a snowstorm in December of 2012,” says Shereen Ali, BEng 15, one of the six students who worked on the Capstone project, The Contingency Advisory Program. “We had to learn the airport lingo, then take into account the weather, priority flights, airport protocols, IATA regulations, Nav Canada requirements and learn how flights are assigned to different gates.”

Gate allocation, it turns out, is an important variable during a storm. “We ended up speaking to snow-removal teams and operations people to determine which gates function best in bad weather, then we had to figure out the best way to automate gate assignment for full efficiency, taking into account all the restrictions,” says Qasim Rehman, BEng 15, a team member.

Rehman and Ali, along with fellow members Dana Fruchter, Anita Sarkissian, Alexa Ramia and Chyntia Sari, set about collecting data. Three of the team members took a graduate-level math class with their Capstone supervisor, assistant professor Ivan Contreras, to learn how to create an algorithm to process the weather and airport data. 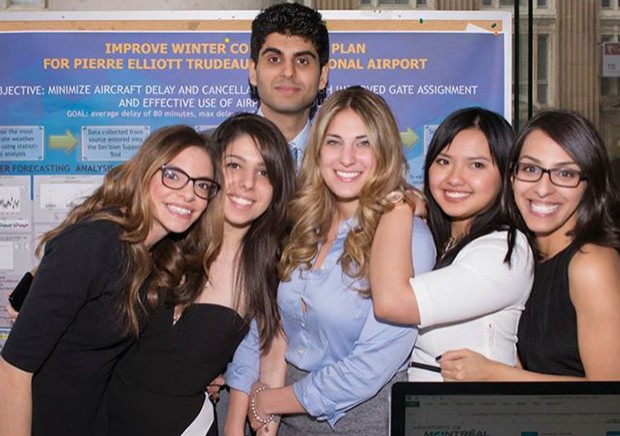 Next, with help from Python programmer Karan Shahani, they created a software tool to improve airport gate allocation contingency plans in the event of bad weather. When the students ran the simulation, the results took everyone by surprise: flight delays were reduced by 33 per cent and the number of priority flight cancellations was reduced by 98 per cent. Cancellations of non-priority flights were down by 60 per cent.

“It’s optimization at its best,” says Rehman. “The airlines would kill for this … It’s an engineer’s dream to have their inventions implemented, so I hope we can take it to market. The project helped me understand how applied math can be used for anything and it clarified what I can do in the industry. We did just as much project management as research and development.”

So, what’s next for the promising Capstone project? Taking the software to market isn’t a simple matter, not yet. “The scope of the solution is a bit narrow for the airport’s full scheduling needs. It can’t be used ‘as is,’” says Nadia Bhuiyan, Capstone coordinator for industrial engineering and associate director of the Concordia Institute of Aerospace Design and Innovation(CIADI).

“But maybe it could be used for other kinds of scheduling — buses, other transit vehicles.”

Still, Bhuiyan praises the students’ efforts: “It was a notch above what we typically get for a Capstone project and it was exceptionally challenging for a group of undergrads,” she says.

“The methodology was complex, as was the collection of all the different sets of data and the manipulation of that data. They didn’t win first prize, but we created a runner-up prize to honour their project.”

Find out more about research facilities in the Department of Mechanical & Industrial Engineering.