The Black Feminist Mixtape: a tool to 'undermine and subvert patriarchal power'

Jayne Mandat is a graduate diploma student in Communication Studies at Concordia. This piece by her originally appeared on the Tumblr blog, futurefemmes.

As most Black 90s kids, I grew up with my eyes glued to the show 106 & Park on BET where Free and AJ would introduce us to the best hip hop and R&B songs. I grew up bumping and jamming to the Snoop Doggs and the Puff Daddys, not even understanding what hip hop was, but simply enjoying the beats and the culture.

Once I got older, however, and became more conscious of the society we were living in, it dawned on me that hip hop wasn’t all beats and fun. Without taking away its importance and power, I wanted to shine a light on the misogyny and the misrepresentation and objectification of women in hip hop.

Not only is the genre and culture dominated by men, but they’re also objectifying and mistreating women in their lyrics and images. Filmmaker Ava Duverney once said: "To be a woman who loves hip hop at times is to be in love with your abuser. Because the music was and is that. And yet the culture is ours." This quote inspired me to mold this mixtape into a tool that undermines and subverts the patriarchal power of hip hop while giving a sliver of hope and empowerment to Black women because we should reclaim our place in society and hip hop and demand respect for ourselves. 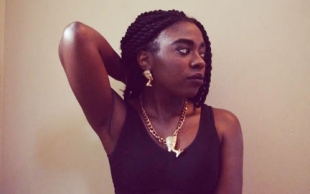 It was hard finding a reading that could relate to the project I had in mind at the time. The only one that gave me inspiration was Serazio’s article on the mash-up, though it left me quite perplexed. While I strongly disagreed with his view on the mash-up as undermining the author’s intent and erasing the original coded meanings and readings, I wanted to explore mash-ups in a different form (songs mixed with excerpts of spoken words) and deepen the message and coded meaning of the songs through that mix.

By looking at this mixtape as a music technology, I had to ask myself the following questions: “For whom will this make things better? How? Is it open or closed to creativity and innovation it has not yet anticipated?”

Naturally, I was making this mixtape for Black women of all ages to empower them and reclaim their place in society and in hip hop. As for the openness to creativity and innovation, I believe that this music technology can not only inspire to do more, but also be an innovation in its own.

Although this mixtape is dedicated to women, it was important to me not to project a negative discourse towards men. I kept in mind that female empowerment didn’t have to stem from the rejection of men or from women’s sexualization. Black female rappers have long interpreted being feminist as being anti-men and “in solidarity with Black men, […] refuse to identify or affiliate themselves with a movement that is perceived as speaking largely to heterosexual, white, upper middle-class women’s concerns.”

But being Black and a feminist aren’t and shouldn’t be antonyms. Hip hop has had a history of “trying to either keep women quiet or getting them to shut up, […] trying to get them into bed or in some cases even condoning or bragging about sexual assault/rape which ultimately has the same silencing effect.” Consequently, Black women have a lot to fight for, and they shouldn’t be silenced.

Creating a successful mash-up that did not undermine the author’s intent was not the difficult part. However, it took a lot of research to assemble a mix that was coherent from start to finish and that also followed a certain type of narrative. My first initiative was to showcase the misogyny oh-so present in hip hop by inserting a few snippets of popular songs by popular artists like N.W.A, Snoop Dogg, Too $hort, etc.

I didn’t want to saturate the mixtape with misogynist discourse towards Black women, nor did I want to give it much importance, which is why I decided to play those tracks in lo-fi compared to the other songs. I wanted to change the fact that, as journalist Danyel Smith wrote, "Women's lyrics are often still viewed by men and women themselves as not valid ... women’s versions of reality are somehow suspect," by making them louder and more prominent, while the men’s discourse is undermined.

Also, it represented how this type of discourse is mostly mainstream, played on the radio and big networks, while the Black Feminist Mixtape tries to subvert that power.

After showcasing the misogyny present in hip hop, my plan of action wasn’t always clear to me. I changed my mind many times and transformed and replaced songs even more. But at the end, I decided on the narrative that I wanted to voice and tried to stick to it.

I mostly chose Queen Latifah’s songs because they truly spoke to me and are extremely powerful now as they were when they first came out. What I admired from the first song U.N.I.T.Y. is that she wastes no time calling out men and rappers that call women bitches by singing “Who you callin’ a bitch?” (1:55).

I wanted to start with this song because rappers always refer to women as bitches to the point where women have started referring to themselves as bitches as well. To contribute to that question, I wanted to subvert and reclaim the word bitch, by making it something meaningful: beautiful, intelligent, talented, caring and heavenly fly.

If men insist on calling women bitches, then this is what the word should mean. But I also end the short speech by saying: "Just call me lady" (4:14), which leads to the second main song of the mixtape “Ladies First”. In this song, “Queen Latifah demonstrates her nationalist and feminist sensibilities” (Cooper, 67), which are qualities that all women, especially Black women, should have. It’s one thing to fight for our rights and demand respect, but infiltrating every part of the nation and working in politics, economy, arts, etc., is what we should also aim at: take our rightful place in society.

The next song, "Freedom," explains just that as well. In this track, Queen Latifah and her fellow female rappers "articulate a position that is both individual and related to the collective good." I thought it was fitting to put Janelle Monae’s song "Q.U.E.E.N" next as she also calls for action and empowerment.

The last two songs, "Doo Wop (That Thing)" and "Bag Lady", are from Lauryn Hill and Erykah Badu, respectively, who are important Hip Hop artists, although they are both singers. The message I wanted to convey to Black women through these songs was to respect themselves and to let go of any baggage that might bring them down in order to move forward. That was the narrative I stuck with: demand respect, reclaim power, move forward and respect yourself.

I tried to choose each excerpt of spoken word or poetry carefully, but that was probably the most challenging part. Although I had an idea of what kind of poem I wanted, some of them didn’t seem right or they didn’t quite fit into the flow of the mixtape. But they each expressed the reality of the Black woman, shown in different lights.

As I recorded my own voice, I drew most of my inspiration from African-American DJs I’ve seen on TV like DJ Hollerin’ from the movie Beauty Shop (2005) or Mister Señor Love Daddy from Spike Lee’s Do the Right Thing (1989).

Their style of speech is always smooth and rhythmic, as if they were rapping or reciting poetry, but on the other hand, they are witty, real and seem close to the people they are addressing.

That’s what I hoped my voice to sound like and that’s the feeling I wanted to convey, like I wanted to create a bond of sisterhood with my listeners. I didn’t really like my voice at first, and even considered recording someone else. However, I knew that my project wouldn’t be as authentic if it wasn’t my own voice.

It was challenging to write the short speeches, because I had to take into consideration the number of seconds I had to say what I wanted to say, and the beat that I was going to say it to. Everything had to match in a timely manner and I even had to take out parts of my speech sometimes, or space out the words or sentences in order for them to fit.

Furthermore, I had the idea of creating a DJ name for myself, and incorporating it into the mixtape, but after pondering it, I decided that if I wanted the mixtape to be inclusive and for girls and women to identify more to it and take it as their own, it would be best to not tag it with my DJ name. Therefore, I simply used the tag The Black Feminist Mixtape, so it wouldn’t belong to one person, but to all.

It took me about four days and one sleepless night to conceive this project, not including all the research I had to do. I learned most of the technical skills I needed from YouTuber Piffery Goodz. His tutorials taught me how to slow down tracks and create cool effects. I think it added a lot to my mixtape because it gave it that real “hip hop mixtape” effect.

Aside from slowing down the tracks using the fade tool and reversing the songs, I mainly used EQ on most of my tracks, especially the ones where I am talking to give a radio effect. I chose not to manipulate the songs too much to keep their "essence" as much as possible, however, I did trim/past some songs to give it that stuttering effect found in old school hip hop/rap songs.

At the end, not only did I learn about the hidden gems of Logic Pro X, but also about women in hip hop. Although women are clearly outnumbered by men, we still hold an important place in hip hop and no misogynist and patriarchal discourse can take that away from us.

Today, although the biggest, if not the only, mainstream hip hop female artist is Nicki Minaj, she’s not exactly the type of role model I would want my daughter to look up to due to her degrading lyrics and oversexualization.

However, there are still many female rappers that speak about real issues and seek to empower and put Black women on the same pedestal as men.

The beauty of this project is that it gave me inspiration to create other volumes and push the agenda a bit further. Music is such a powerful tool when it comes to spreading messages and I believe that I can reach people, may it be only one little Black girl, with a project such as this one.

Find out more about Concordia's Department of Communication Studies.