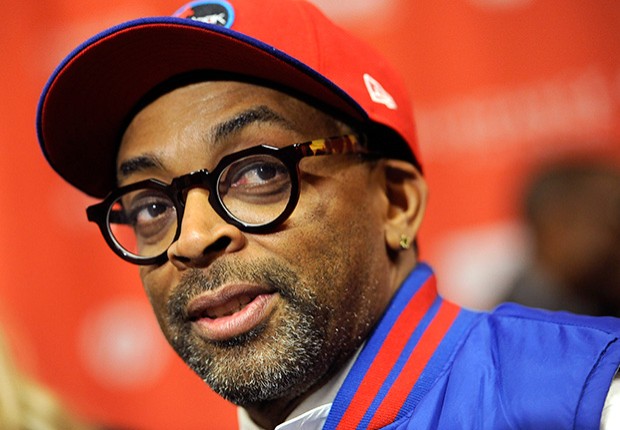 When Spike Lee's Do The Right Thing (1989) wasn't nominated for Best Picture, it was "one of the biggest Academy blunders ever." Lee plans to boycott this year's Oscars ceremony.

When the Academy revealed the 2016 Oscar nominations this week, it all just felt like a little bit of history repeating itself.

Among the 20 performance nominations, all were white. This led a number of actors and filmmakers to say they won't be attending — nor watching — this year's event, including Jada Pinkett Smith, Spike Lee and Michael Moore.

Lee's announcement is particularly meaningful, given that it is a truth universally acknowledged that the lack of even a nomination in the Best Picture category for his fiery 1989 film on brutal race relations, Do The Right Thing, was one of the biggest Academy blunders ever. This year's lily-white nomination list is simply a repetition of what happened last year. Many are understandably declaring that enough's enough.

To add a layer of irony to it all, the woman in charge of much of the damage control is herself black. Oscars president Cheryl Boone Isaacs — the first black person ever appointed to the position — has declared that she herself is "heartbroken" by the lack of racial diversity among the nominees.

The debate is one well worth having, but it eclipses a major point about the Oscars themselves: they aren't really much fun to watch anymore. In fact, they're downright dreary.

Most people I know — even diehard film buffs or people who work in the industry — tend to skip them, waiting for the scant highlights to be posted on social media the next day. As Toronto-based playwright and screenwriter Brad Fraser noted in a Facebook post, now he could skip the Oscars while calling it a politically motivated boycott.

It's not too late to make the Oscars fun again. Here are five steps the Academy could and should take to reviving itself and reinventing its biggest night of the year.

5 ways the Oscars could be so much better

1. Improving diversity means revamping your members’ list ... so just do it

This will be tough, and Isaacs insisted this week that new members will be inducted in response to this latest scandal. But her proposals don't go far enough.

This is tricky, as the Academy keeps its membership list private (this sounds like a lack of transparency, but when you consider how much Academy members would be lobbied and/or bribed if everyone knew who they were, keeping the list private makes sense). According to an LA Times report, 90 per cent of Academy voters were white while more than 70 per cent were male.

But as tough as it will be, the Academy is going to have to revamp its list. It must be 50 per cent female, and one third non-white. It's also going to have to make sure that half the list is under the age of 55. Tough measures, but given how white things have persisted in being, this is the only way to bridge that diversity gap.

Speeches are cut off every year by that annoying monitor that tells winners how much time they have to speak. Let them ramble if they so choose.

Entertaining speeches are a big part of the fun of watching the show, and lately, they have been coming up short.

3. Give us more sci-fi character cameos

God knows, there are no shortage of sci-fi characters to bring onto the show. William Shatner's reprisal of Captain Kirk was brilliant, and who can forget Jane Fonda dancing with Cornelius from Planet of the Apes?

4. Let the Honorary Award winners give their speeches at the main event

In a misguided attempt at time saving, the Oscars bumped the Honorary Award speeches to another event. That meant you missed the speeches of Lauren Bacall, Roger Corman and Spike Lee, among others.

In other words, speeches we all would have loved to hear. Bring them back.

5. Stop playing it so safe with the hosts

Ever since the Family Guy guy went a bit nuts (what were you expecting?), the Oscars has played it safe with hosts they know won't go over the line.

If there's one thing you should learn from your sleazy cousin, the Golden Globes, it's that having a host who won't hold back (Ricky Gervais) actually makes the show worth watching. Bring on the boundary-pushing jokes — you might just find you get your audience back.

Matthew Hays is a part-time professor of journalism, film studies and communication studies at Concordia. He has written about cinema for The Globe and Mail, The New York Times, The Guardian, Cineaste and The Daily Beast.

Find out about the Concordia grad whose film is nominated for three Academy Awards at the 2016 Oscars.