What is the 'healthy self'? Concordia Vanier scholar Poppy Wilkinson investigates

What is the “healthy self” in early adolescents? That’s the fundamental question behind Poppy Wilkinson's proposal to the Vanier Canada Graduate Scholarships program. 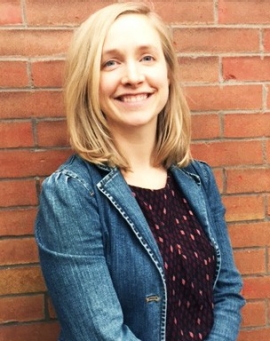 Poppy Wilkinson: “My interests have always been about people –– how people get along as a society, how they navigate the world.”

Wilkinson, a Concordia MA and first-year PhD student in the university's Department of Psychology, now has the financial support to focus on finding the answer.

She landed the research scholarship in 2014 and, after a brief deferral, is now joining Concordia's three 2015 Vanier recipients.

The Government of Canada launched the Vanier program in 2008 to strengthen the country’s ability to attract and retain world-class doctoral students, and establish Canada as a global centre of excellence in research and higher learning.

The official title of Wilkinson's project is “The Social Consequences of Self-Distortions During Early Adolescence: A Cross-Cultural Perspective.”

“I’ll be studying the social functioning of early adolescents who see themselves more positively than is objectively warranted,” she says. “This kind of distortion in self-concept is known as narcissism.”

She clarifies that she isn’t studying the narcissistic personality disorder found in the Diagnostic and Statistical Manual of Mental Disorders.

“I’m looking at what they call 'childhood normal narcissism.' While in the past, narcissism has been considered a disorder, recently it has also come to be understood as a normal-range individual difference.”

Narcissism is characterized by a self-view that is at once grandiose and fragile, as it is highly contingent on the validation of others. It is associated with a host of negative behaviours including impulsivity, aggression, increased risk taking and exploitation, as well as unstable interpersonal relationships.

“Surprisingly little is known about how narcissism functions in adulthood or childhood, particularly with respect to social experiences and peer groups,” adds Wilkinson.

“In the literature, narcissism is usually assessed with self-report measures, but because narcissism plays out in the social realm, the perspective of peers is also important and interesting.”

Wilkinson's research comprises a three-part project concerning the social consequences of childhood normal narcissism in 10-to-12-year-olds in Canada, the Netherlands and Colombia.

She’ll be working out of the Interpersonal Relationships and Development Laboratory, which is also known as the Bukowski Lab, in reference to William Bukowski, a psychology professor at Concordia. It’s part of the Centre for Research in Human Development (CRDH).

1. To clarify the association between narcissism, social validation and aggression

2. To better understand the social status of children high in narcissism

3. To explore cultural variations in adolescents' self-concept, and how these children function in their diverse social worlds

“The results could lead to practical implications for educational settings,” says Wilkinson. “Some children benefit from initiatives aimed to boost self-esteem, but other children who feel superior may benefit from a different kind of intervention.”

From English lit to psychology

How did Wilkinson go from a BA in English literature to pursuing her PhD in psychology?

“My interests have always been about people –– how people get along as a society, how they navigate the world, why they do the things they do and what consequences this has for them and for those around them,” she says.

“Analyzing the complex patterns and themes of human behavior is what attracted me to earn a bachelor’s degree in English literature with a minor in socio-cultural anthropology. Indeed, a key element of any good story lies in how an individual’s life history intersects with his or her social and cultural context.”

It is these same core interests that drew Wilkinson to research peer relations in developmental psychology and, more specifically, cross-cultural individual differences in self-concept.

Learn more about research at Concordia. Find out how to apply for a Vanier Canada Graduate Scholarship.