As the Loyola College of Diversity and Sustainability’s principal retires, her colleagues sing the praises of a tireless innovator and insightful scholar
|
By J. Latimer
Source: University Communications Services 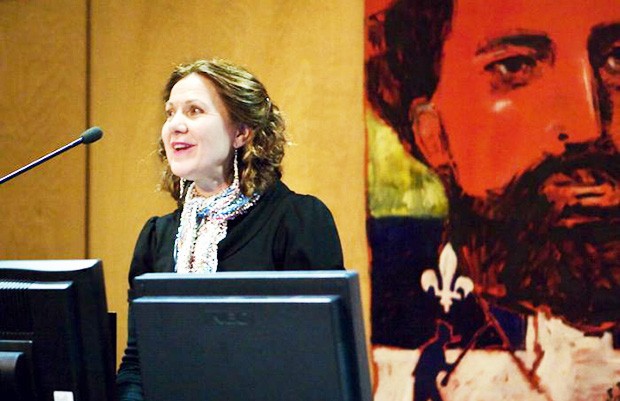 The Loyola College of Diversity and Sustainability is Rosemarie Schade's “heart and soul.”

When Rosemarie Schade retires on December 31 as principal of Concordia's Loyola College of Diversity and Sustainability (LCDS) after 13 years of service — as well as 27 years as an associate professor in the Department of History — she has the satisfaction of a job well done, an abundance of adoring colleagues and no shortage of teaching recognition.

“While Rosemarie is a respected German scholar, working on feminism and teaching popular courses on the Weimar Republic and the Nazi era, she has also been based out of the college, focusing on diversity and sustainability,” says Norman Ingram, who will never forget Schade’s kindess and support when he was chair of the Department of History. “Her energy is boundless.”

Schade’s compassion is a recurring theme, along with testaments about her competence, diligence and innovation.

Early days at the Loyola College of Diversity and Sustainability

William Bukowski, who founded the LCDS in 2002 with the support of Martin Singer, then dean of the Faculty of Arts and Science, credits Schade for having the vision to bring sustainability into the college’s mission.

The college was first known as Loyola International College, focusing on diversity. In 2012, the name changed to reflect the new, expanded emphasis.

“As well as creating a nurturing home for students and part-time faculty at the college, Rosemarie had the forethought to advocate for sustainability as a companion topic with diversity,” says Bukowski, who was co-principal with Schade from 2002 to 2005, when Schade assumed the full title.

“That’s one of Concordia’s core values and it adds to our value.”

Schade received her undergraduate degree from Glendon College at York University in 1976. She stayed on to do her master’s degree, before getting a PhD in philosophy in 1985, from the University of York in England.

An advocate of the small-class experience

When Schade first applied for a position in Concordia’s history department in 1988, Robert Tittler was on the hiring committee.

“We went for a lunch at the old William Tell Restaurant on Stanley Street and the committee could sense Rosemarie had a deeper commitment to teaching and students than some of the applicants with more experience and publications,” recalls Tittler, a busy professor emeritus of the Department of History, as well as a neighbour and old friend of Schade’s.

“What soon became obvious on the job was her dedication to the notion that one taught and learned best in small groups. I think, in retrospect, she picked that up at her first teaching post at York University’s Glendon College. We both shared that notion, because I’d been at Oberlin College, another smaller institution.”

A force for student engagement

James Grant, a fellow at the LCDS and a professor in the Department of Biology who teaches BIOL 205 - Introduction to Sustainability for the college, notes Schade’s devotion to student engagement.

“Rosemarie is about undergraduate teaching,” says Grant, who was one of the architects of the college’s minor in Sustainability Studies, along with Peter Stoett and Schade. The college’s other minor is Diversity and the Contemporary World. Grant also points out that she’s been a Provost Fellow of Engagement.

“Our colleges at Concordia are our hidden gems,” says Grant. “They’re little islands of engagement. Small colleges depend on the energy of the principal and a few others. At the LCDS, it’s all Rosemarie’s drive. It’s her heart and soul.”

Another example of Schade’s commitment to student engagement is the Annual International Concordia-Siena Conference on Globalization, which she started in 2005. Siena College is a small, liberal arts school in Loudonville, New York. The conference alternates between the two institutions.

“This partnership is great because it builds esprit de corps for the students, who get to expand their horizons and meet students from another small college,” says Bukowski.

“Rosemarie is a leading force on campus for curriculum innovation,” says Stoett, director of the Loyola Sustainability Research Centre and long-time friend of Schade’s. “Her relentless desire to be interdisciplinary and inter-faculty has led to the development of several innovative courses.”

One of these is "The Nature of the Self," which will be taught by professors from multiple areas, and should run as a pilot in 2017.

In the winter term of 2014/2015, the LCDS started offering another innovative course, "LOYC 398K- Orientation to International Community Engagement," taught by six guest lectures. The first year was led by pk Langshaw.

The course offers a critical look at international development and aid, from historic, post-colonial, cultural, faith, gender and financial perspectives.

“It’s the first truly cross-faculty course, to our knowledge,” says Raymond Paquin, associate professor in Management at the John Molson School of Business and fellow of the LCDS who teaches "MANA 369 - Business and Sustainability," which is open to college students.

“Rosemarie has a claim to leadership in this mission to intentionally cross boundaries,” says Paquin. “Students need to be free range … She’s really good at bringing people together who don’t fit neatly into a conceptual bucket.”

She’s also an expert at creating broadening, experiential learning opportunities for her students. Witness the exchange program and course she created with contacts at Fulda University of Applied Sciences in Fulda, Germany.

In 2013, the first year of the exchange pilot project, students from the LCDS travelled to Germany to learn about sustainable practices and partner with other international students to author a joint report. Concordia returned the favour in 2014 by hosting the Fulda students for a three-week intensive process, where they had the opportunity to experience hands-on learning.

“Germany is leading the world in sustainability, so this kind of experience is invaluable,” says Grant. “Rosemarie’s personal contacts were key. She’s a great networker.”

While the German exchange students were in Montreal, Schade reached out to the local arts community in Notre-Dame-de-Grâce to film the experience.

“We went all over NDG and downtown to sustainability sites, like the NDG Food Depot, organic gardens, food co-ops and composting places,” says David Adelman, BA 13, the videographer, a Concordia journalism graduate who took a minor in Diversity at the LCDS when it was still the Loyola International College. “It was important to document the trip.”

Schade also collaborated with NDG-based artist and animator G. Scott MacLeod, BFA 03, on his documentary film After the War with Hannelore (2009). She was a historic consultant and English/German translator.

“Rosemarie is a force for change, and at the college she’s put in place a framework for young people to change the world,” says MacLeod, who connected Schade with Adelman to shoot the video.

... and a gracious party host

You can’t ask about Rosemarie Schade without hearing about her famous house parties, book launches, retirement celebrations and cooking sessions with students and faculty.

“She opens her home in NDG to everyone,” says Adeela Arshad-Ayaz, assistant professor in the Department of Education and fellow at the LCDS, who describes herself as heartbroken over Schade’s retirement.

“Rosemarie’s a magnet who attracts people and nurtures relationships,” Arshad-Ayaz says. “She doesn’t just talk the talk. At her parties, I’ve met professors from other faculties, which doesn’t happen as often as you’d imagine, and we all love the collegial atmosphere she creates wherever she goes.”

Schade has at least two projects to continue developing in her so-called retirement. One is the Project Waechtersbach and its website. The goal is to further document the social history and aesthetic production of a recently bankrupt German ceramics factory in Schlierbach, a town in the region of Hessen.

“Rosemarie’s asking, ‘How has the closing of a major ceramics factory impacted the German region in which it had existed for 179 years?’” says Adan Suazo, assistant to the LCDS principal and Schade’s close colleague.

“She wants to preserve that history and document what it meant to the people. She was also asked to be on the board of directors of a movement to create a museum in the area.”

Schade’s second and parallel project is to study the forced migration of millions of Germans in occupied countries after World War II. The migrants were sent back to Germany, even if they were second or third-generation Germans and didn’t speak the language. Towns throughout the defeated nation were instructed to welcome the refugees into their homes.

“Rosemarie’s topic is brilliant because many people don’t know about the forced migration, and it’s also highly relevant because of what’s happening now, with the refugees,” says Stoett. “She’s going to ask, ‘how did they cope?’

“Her village in Germany, for example, doubled in size. What can we lean from this? There’s a sense of urgency because the older locals who remember the migration are dying out.”

Find out more about research, courses and minors at Concordia’s Loyola College of Diversity and Sustainability.