In an article published recently in the Toronto Star — "How Canada reversed the 'brain drain'" — top research executives revealed that Canada is “better than it ever has been at retaining and attracting top talent.”

We asked a variety of new international faculty hires why they decided to come to Concordia. This week, our interviewee is Christophe Grova, assistant professor in the Department of Physics and a member of the PERFORM Centre's interdisciplinary research team.

‘Funding opportunities and the PERFORM Centre will keep me at Concordia’

I am originally from France. I hold a bachelor’s and master’s in biomedical engineering, with a minor in cognitive sciences, from Université de technologie de Compiègne. 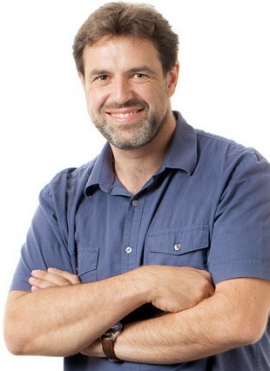 I received my PhD in biomedical engineering from the Université de Rennes 1, then arrived in Montreal in 2003 to start a postdoctoral fellowship at the Montreal Neurological Institute and Hospital, under the supervision of Jean Gotman.

I began developing and evaluating methods for electroencephalography (EEG) source localization, aiming at localizing along the cortical surface the generators of bioelectrical neuronal activity measured on the scalp surface.

With Gotman, I also worked on simultaneous EEG with functional Magnetic Resonance Imaging (fMRI) in order to study the hemodynamic response following an epileptic discharge measured on scalp EEG.

In July 2008, I was hired as an assistant professor in the biomedical engineering and neurology and neurosurgery departments at McGill University.

Six years later, in July 2014, I accepted a job at Concordia as an assistant professor in the Department of Physics and at the PERFORM Centre, where I currently chair the Applied Bio-Imaging Committee.

My lab, the Multimodal Functional Imaging Laboratory, is a multidisciplinary team of neurologists and methodologists.

We investigate multimodal data fusion to characterize brain mechanisms in healthy conditions and during epileptic activity.

At Concordia, my laboratory is currently investigating the structure of brain neuronal communications during resting state using high-density EEG (256 electrodes) acquired simultaneously with fMRI data, in both normal and pathological conditions.

It was after seeing a job announcement that publicized the very exciting installation of the PERFORM Centre that I became interested in working at Concordia.

I was highly motivated to take part in this excellent initiative, to be there at the beginning to help build a strong multimodal imaging platform — together with a great centre offering methodological resources in medical imaging.

The opportunity to join Concordia’s Department of Physics was another important component for my decision, because I’m convinced that strong collaborations between my expertise as a biomedical engineer and advanced research in physics will offer key opportunities to develop new promising medical imaging approaches.

The PERFORM Centre is an ideal and motivating environment as it allows interactions between different departments and faculties, and provides us with the possibility to recruit students from different backgrounds.

We already experienced such multidisciplinary richness within the Applied Bio-Imaging Committee that I am chairing, in which we are currently building our vision for bioimaging at PERFORM and at Concordia.

At the very beginning of my career, before starting my position at McGill, I tried to go back to France, but I finally decided to stay in Canada.

I really appreciate the freedom here, as well as all the possible sources of research funding we have in Canada and Quebec.

Funding opportunities and the chance to further develop the imaging platform at PERFORM are what will keep me here at Concordia.

There is a niche for the use of new portable "imaging" devices — using NIRS and high-density EEG notably — that will promote original research. PERFORM is one of very few places that this can be done.