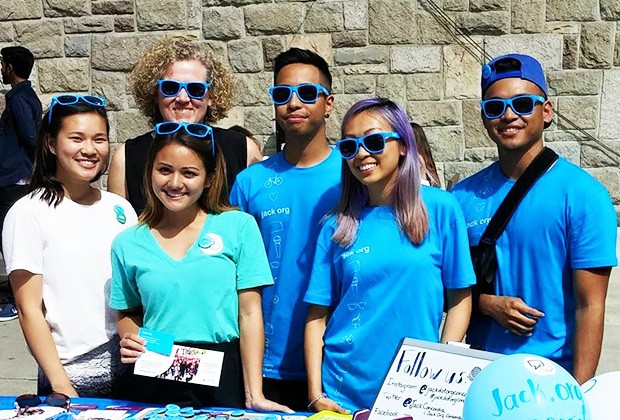 Did you know that if you’re currently studying at Concordia, you have access to 10 free counselling sessions?

Well, it’s true, and there’s a new student club, Jack.org Concordia, to help spread the word about mental health-related services like this on campus. It’s the Concordia chapter of a national network of concerned young leaders.

“There’s still a lot of silence and stigma about mental health,” says Alexis Lahorra, club president, who studies Communications and Cultural Studies and Spanish at Concordia. “Our aim is to create year-round interest in mental health issues through events like speakers’ series, movie screenings and more.”

To that end, Jack.org Concordia is hosting their first event — an exclusive preview screening of the feature film Listen by Concordia alum Erahm Christopher (BA, 2003) on Sunday, November 29, at the Alumni Auditorium (H-110).

The doors open at 4:30 p.m. and the screening starts at 5 p.m. The event is sponsored by The Concordia Council on Student Life.

Listen is a scripted drama about a group of conflicted young people and adults struggling for personal connections when they are united in a small town by self-destruction, tragedy and redemption.

"The film addresses real and relevant issues that connect to both youth and adults,” says Christopher, who earned his degree in Film Production from Concordia’s Mel Hoppenheim School of Cinema. “It is my hope is that it will prove to be a tool that will stimulate discussion and motivate positive action focused on addressing mental health issues,"

Over the last nine years, Christopher has traveled more than one million kilometres and spoke to nearly one million young people around the world to research for the film.

“I have learned more about our youth than I could possibly have imagined. School shootings, depression and suicide are the tragedies that result when youth are disconnected,” says Christopher. “It doesn't matter if I am in Los Angeles, Rome, New York, Cleveland or Montreal — each city has youth dying for someone to listen.”

Following the screening, a question-and-answer discussion period will take place, involving the filmmaker and Sydney Miller, a clinical psychologist and associate professor of Psychology at Concordia. Miller will be talking about active listening.

“Many students aren’t aware of all the mental health services and the counselling and psychological services at their disposal on campus,” says Monika Sawka, vice president of peer support at Jack.org Concordia, where there are 10 student executives and a growing number of volunteers. “They might know about counselling services, but they might not know about the Sexual Assault Resource Centre or The Access Centre for Students with Disabilities.”

Cheered on by Health Services

“What they’re doing is great — getting the knowledge out there,” says Howard Magonet, interim director, Campus Wellness and Support Services. “Sometimes there’s no better messenger than peer to peer. No one service can do this all alone. There’s great potential for partnership.”

Looking forward, Lahorra at Jack.org Concordia would like to find a permanent location for their club — they’re currently reserving rooms in the library for their Wednesday night meetings — and she’d like to collaborate with other student organizations and clubs.

“The idea is to connect with more students to lessen the stigma and get people talking.”

Tickets: $10, all proceeds go to the Welcome Hall Mission.