Parental rage: 'In the play, people get it right away'

A Concordia professor lands $400,000 to cinematize her mental-health stage drama
|
By Brian Kappler

You Arrive cast members Hannah Gold-Apel as the adolescent self, Shea Wood as the false self and Aria Boucher-Apel as the child self. Photo by Ezra Soiferman

Since then, it has been presented 50 times and seen by approximately 4,000 people.

Now, Harnden has received more than $400,000 to develop English and French film versions of the play, which grew from her 12 years of experience in the psychiatry department of the Montreal Children’s Hospital. She hopes the movie will help spread the play’s message to more parents and clinical workers across Quebec, and beyond.

Five other Montreal-area professors and mental-health professionals are working with Harnden on the cinematic project, which received $305,000 from a Quebec Government innovation program and $100,000 from the R. Howard Webster Foundation.

In the play a therapist meets with four successive versions of the same patient. Four different actors play different parts of this person’s self: her child self, her adolescent self, her false self and her real self. As these selves tell their stories, we see “the resolution of the trauma, as the patient kind of comes back to herself,” says Harnden.

Harnden plays the therapist, and also narrates. Students in her graduate-level courses play most versions of the patient.

Harnden says the play is based on what she learned working with hundreds of families in acute crisis at the Montreal Children’s Hospital. Children from the age of four to adolescence would present as suicidal, or with other serious psychiatric symptoms. “We focused on working with the families to see what was really going on,” she says.

You Arrive shows the effect parental stress and rage can have on kids. “Their central nervous system goes into a state of ‘fight, flight, freeze,’ where the child feels chronically in danger,” says Harnden. “That can lead to neurological changes … They won’t be listening to the teacher anymore, they’re stuck in that state. The nervous system doesn’t know how to calm down, and that creates changes in the brain.”

External trauma — like a car accident, for example — can cause the same reaction, but the focus here is on family issues. 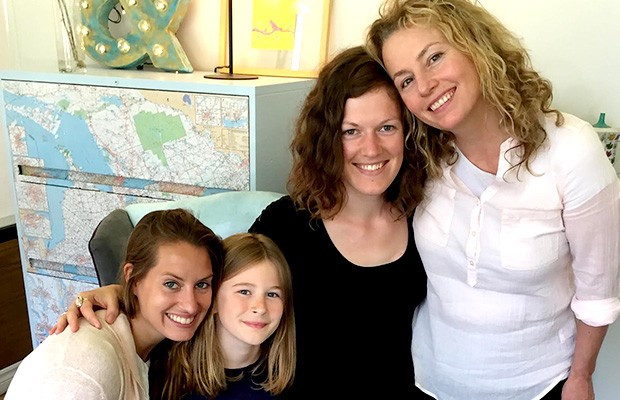 Harnden coaches parents on how to connect with their own trauma that they may be passing on to their kids. “The play shows parents learning how to calm down, to regulate their own nervous system before they regulate the child,” Harnden says. When parents are able to do this, many of the kids’ symptoms settle down.

Harnden, herself the mother of two boys, felt haunted by some of the patients at the Children’s; the ones the system had failed. Writing the play was a way for her to do something with those encounters.

It’s also a way for her to get out an important message: “We’re over-medicating kids, and we need to work with the families first.”

And theatre is a great way to share ideas, she adds. “I wanted to find a way to teach what I had learned, to make research come alive. And theatre is a much more embodied, alive experience than plain theory.”

As Harnden points out, most parents don’t read journal articles. “But in the play people get it right away … in a play format there’s emotion and the audience is engaged … It’s a much easier way to digest theory.”

This form of research, called performance autoethnography, combines the lived experience with theory. In You Arrive the theories and research around the impact of trauma are combined with a real story of trauma.

Harnden says, “We learn when we can connect on a human level …if we can tell a story when were teaching and make it come alive others can internalize it more deeply,” Harnden says. 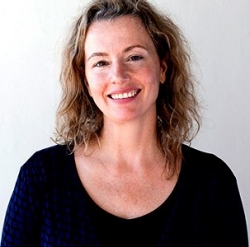 Concordia’s Department of Creative Arts Therapies has been a fine place to develop her project, she says. “It’s the only one of its kind in North America, and it has a really exciting program that gets the best students: artists who really want to use their art as a vehicle for healing.”

You Arrive was first formally presented at the 2010 Canadian Conference on Collaborative Mental Health Care, in Winnipeg. When the house lights came up at the end, people were crying, clapping and standing, she says.

“These were hard-core clinicians, doctors, and they don’t like to show a lot of emotion … But they said they could really relate to the play. As parents, as kids, we all have a certain amount of trauma.”

The film version of You Arrive will be produced in both English and French, making it available to clinical professionals, patients and their families both across Quebec and further afield.

An additional parenting DVD (in French and English) will also accompany the film version; this will be specifically for parents and will demonstrate step-by-step how they can regulate their own emotions in order to help their children contain and express their emotions during difficult family moments.

Filming started in March, with Harnden directing and local filmmaker Ezra Soiferman on board as director of photography and technical director. Shea Wood, a PhD student in Concordia’s INDI Program, has a central role in the film version. A member of the original cast, Wood is researching the impact of this kind of theatre on the audience.

Initial distribution will be via YouTube in January for the English version and June for the French version. The DVD version will follow in 2017, with added material addressed to parents. It will be distributed via CLSCs and some universities.

Find out more about the Department of Creative Arts Therapies.