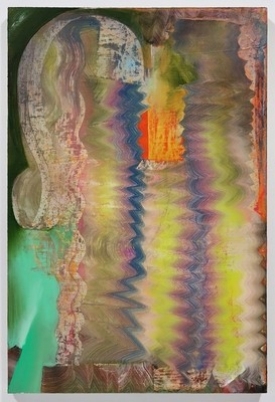 Count ’em — no fewer than four of 15 finalists for this year’s RBC Canadian Painting Competition are from Concordia’s Department of Studio Arts.

“They chose really diverse artists this year and there’s something special about all the finalists,” says Hardy.

He describes himself as an abstract oil painter more concerned about how his work feels than adhering to a specific style.

“My work is ‘painting about painting.’ I try to get at something new. My practice is complex and you need to see an exhibition in its totality to appreciate the experiential quality,” he says.

‘This competition can launch careers’

Each year, more than 500 artists submit to the RBC Canadian Painting Competition, a national competition, established in 1999 by RBC with the support of the Canadian Art Foundation.

“This competition can launch careers,” say Hardy. “It’s about visibility and validation. People who are interested in art but don’t necessarily follow it all year tend to pay attention to this prize. Plus, you get published in Canadian Art magazine.”

The winner receives a purchase prize of $25,000 and the two honourable mentions each receive $15,000. Their three paintings also become part of the RBC corporate art collection. The remaining 12 finalists receive $2,500.

The goal of the competition is to nurture Canadian visual artists early in their career by providing them with a forum to display their artistic talent to the country and hopefully open doors to future opportunity.

Hardy feels the Department of Studio Arts — especially in his concentration, painting and drawing — provided him with a nice balance of criticism and nurturing.

“I was encouraged and supported, but also pushed and challenged,” says Hardy. “Two mentors in the department, Janet Werner and Eleanor Bond, gave me very different things. Janet helped me develop technique and strengthen my skill set, while Eleanor helped me on a more psychological and personal level.”

Hardy and his cohort aren’t the first Concordia alumni to gain attention at the RBC competition. In 2013, Colleen Heslin (2014, MFA) won the RBC Canadian Painting Competition.

The winner of the 2015 RBC Canadian Painting Competition will be announced on November 18. Find out about programs in Concordia's Department of Studio Arts.