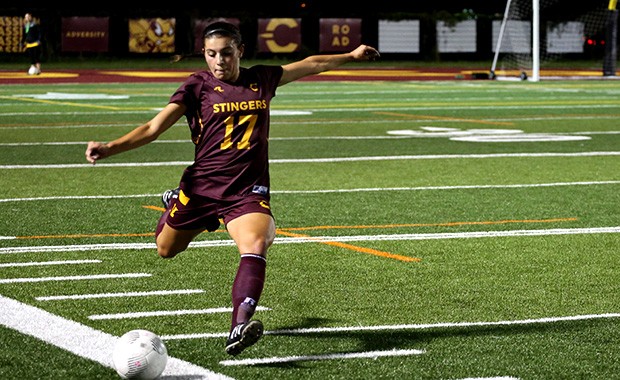 The Stingers women's soccer team will take on Université de Sherbrooke in the annual Erica Cadieux Memorial Game at Concordia Stadium on September 25.

On January 27, 2006, former Stingers soccer player Erica Cadieux, 34, was walking with her 18-month-old daughter Bianca in a stroller when she was struck by a car and killed. Her daughter survived the accident.

A midfielder and defender, Cadieux played for the Stingers from 1992 through 1994. Every fall since her untimely death, Concordia has played a game in her honour.

This Friday, September 25, the Concordia women’s soccer team takes to the field with Université de Sherbrooke for the 10th edition of the Erica Cadieux Memorial Game. Volunteers will collect donations for the Montreal Children’s Hospital, and small gifts like DVDs, decks of cards, stickers, markers, crayons, bubbles and Play-Doh.

Last year Cadieux’s widower, Carlo Spadafora, and their two daughters, Bianca, 10, and Olivia, 9, cheered the Stingers on to a thrilling victory against the Université du Québec à Trois-Rivières Patriotes. The final score was 2-1, thanks to a late goal in injury time.

“The girls understand the concept that their mother played for the Concordia Stingers,” said Spadafora after that game. “They’re also playing soccer — they have that attachment to their mother through the sport. They look forward to the Concordia game every year.”

The Erica Cadieux Memorial Game is important for the Stingers, too, says head coach Jorge Sanchez, who has been on the sidelines for all nine editions so far. He didn’t know Cadieux, but has worked with many of her teammates.

“By all accounts she was really respected and well liked — someone who worked hard, and really cared about the team and being a Stinger. We try and use those values to guide our current players.”

The Stingers are coming off a tie against Bishop’s University this past weekend, and one win and two losses before that in regular-season play. Sanchez is optimistic heading into Friday night’s game against Sherbrooke.

Watch the Stingers women’s soccer team play in the Erica Cadieux Memorial Game at 8:30 p.m. this Friday, September 25, at the Concordia Stadium on the Loyola Campus. If you can't make the game but are keen to contribute, you can drop off donations in Room L-RA 1511 in the Recreation and Athletics Complex.

After beating McGill in the annual Shrine Bowl last weekend, the Stingers will face the defending national champions from Université de Montréal next Saturday, September 26 at Concordia Stadium.

Before the women take to the field, the Stingers men’s soccer team will be looking to break a two-game losing streak when they face the Université de Sherbrooke at 6:30 p.m. on Friday, September 25, at the Concordia Stadium.

At their season opener on September 11, the Stingers beat McGill 4-0.

Concordia’s women’s rugby team heads to the nation’s capital next Saturday, September 26, to face the University of Ottawa at 3 p.m. The Stingers have won all three of their league games so far this season, including an 80-7 trouncing of Bishop’s University.

The men’s rugby team travels across town to face the McGill Redmen on Sunday, September 27, at 3 p.m. In their last game, the Stingers narrowly lost to UdeM, 19-16. On September 13, in their home opener, they beat Bishop’s University 20-13.

The Concordia Stingers club team plays its next home game on Tuesday, September 29, against McGill. So far this season, the team has won five of its six games.

The Stingers are looking to follow up on a 33-21 victory over McGill in last weekend’s Shrine Bowl, which brought Concordia’s record so far this season to two wins and one loss.

Rookie running back Jean-Guy Rimpel proved he’s a force to be reckoned with, carrying the ball 14 times for 135 yards, including a fourth-quarter touchdown. Quarterback Trenton Miller also put in an impressive performance, completing 27 of 38 passes for 275 yards, and running in a touchdown in front of the 3,000-strong crowd at the Concordia Stadium.

The UdeM Carabins earned their first national title last November when they beat the McMaster Marauders 20-19 in the Vanier Cup championship game.

Head to Concordia Stadium on the Loyola Campus next Saturday, September 26, at 2 p.m. to catch the Stingers in action against the Carabins.

Get more information about upcoming Stingers varsity and club sports action at Concordia.