This week is your last chance till spring to tickle the outdoor ivories
|
By Meagan Boisse
Source: University Communications Services

You’ve probably seen — or at the very least heard — the persimmon-coloured piano that stands outside Concordia’s Guy-De Maisonneuve Building (GM) Building on the Sir George Williams Campus. But do you know where it comes from?

Concordia’s street piano is open for anyone to play from 10 a.m. to 8 p.m. from May to September; it is managed by university security staff. This week, on September 26, it will be stored for winter.

The story behind this summertime fixture began back in 2012 on the Plateau, with the launch of a community-based project dubbed Piano des villes, piano des champs.

“Our borough mayor got inspired by a project that existed in other cities around the world called Play Me I’m Yours,” says Geneviève Allard, communications officer for Plateau-Mont-Royal.

The initiative saw two tired, old pianos get a tune-up, a paint job and a second chance at life on the neighbourhood’s street corners. Acclaimed local musician Patrick Watson inaugurated Montreal’s first-ever street piano near the bustle of St-Denis Street on August 28, 2012.

Preparing a piano for the onslaught of Mother Nature and city vandals is no easy feat — which is where Piano Leblond, a father-and-son trio of professional piano tuners come in. The borough enlisted the company to find, weatherize and install its outdoor pianos. Within a year, Piano Leblond grew the project from two pianos in the Plateau to 22 across eight city boroughs.

And so it was, in the summer of 2013, that Concordia’s beloved piano populated the corner of Guy Street and De Maisonneuve Boulevard.

“It humanizes the city and gives a pretext for community encounters,” says Julien Leblond, who coordinates the project. “It’s an ode to the time when we used to gather around the living room piano at our parents’ house, but now we’re bringing the living room to the street.” 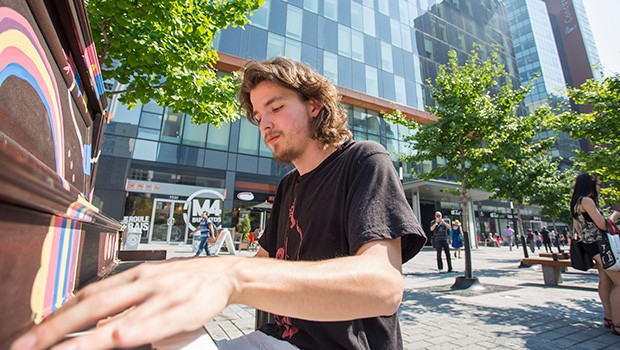 Like nearly all of Montreal’s street pianos, the one outside the Guy-Metro Building was donated.

Piano Leblond, tasked with hunting down prospective street pianos, receives many of its instruments from Move ’N Tune — a piano-moving company turned musical-instrument orphanage that rescues pianos people want to throw away.

“Tom Rebelo [the owner] takes the pianos and puts them in his storage, and he keeps them safe until they can find another home,” says Leblond.

With his father and brother, Leblond makes yearly visits to what he calls Move ’N Tune’s “piano cemetery,” where they select a handful of pianos to repair and repurpose.

“There was a time in Quebec when lots of people had pianos, now there are so many people getting rid of them that there’s this surplus of unwanted pianos, so we recycle them and give them another life.”

All street pianos installed in the city are painted by local artists, and in the case of Concordia’s upright, it was by a few keen students with an affinity for neon orange.

Leblond says it can be a challenge to acclimatize pianos for Montreal’s streets, with the constant battle against heat, humidity, rain and dryness, but that hasn’t stopped Piano Leblond from finding solutions to work around the elements.

“We continue because we see the impact the pianos have on people. I’ve heard stories of people meeting at the pianos and later becoming lovers. I know of a woman whose life was saved because of the piano. She was in the street, ready to die, but now she sings with people a couple times a week around the piano,” says Leblond.

“Next year we want 100 pianos, and after that we want to make a piano road,” says Leblond.

Another unique initiative headed by Leblond is Les pianos publics au diapason, which for a second year saw local musicians set up behind different street pianos to play the same song on the same day at the same hour. “This year it was Edith Piaf’s ‘La vie en rose,’ and it was not just in Montreal, it was all around Quebec. Maybe 50 pianos played this song at the same time.”

This winter, all five of the downtown street pianos — including Concordia’s — will be moved to protected public centres. The piano on Mount Royal will be stored in the chalet.

VIDEO: Find out why Concordia’s street piano strikes the right chord with students.