VIDEO: Concordia students launch a rocket 10,000 feet into the air

You can be sure that Space Concordia — the award-winning interdisciplinary student association that builds satellites and reimagines the future of space exploration — had a blast in Green River, Utah, this June, when it successfully launched the university's first rocket. And now there's video proof!

The 10-foot airframe, or outer structure, was "by far the most advanced frame presented at the competition," according to mechanical engineering student Neil Woodcock, Space Concordia's president and chief rocket designer. 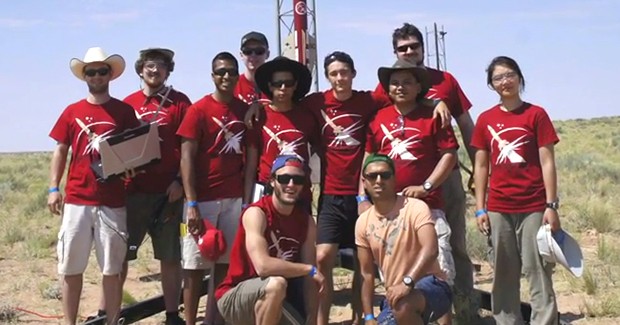 Woodcock highlighted the help of Suong Hoa, director of the Concordia Center for Composites, who offered the use of his lab for its construction. FundOne, Concordia's alumni crowdfunding program, also provided support.

June's event was hosted by the Experimental Sounding Rocket Association, which seeks to further the field of experimental sounding rocketry. It defines this as "roughly between 'experimental' or 'research' high-power rockets and sounding rockets capable of reaching space (generally defined as 100 km altitude)."


Find out more about Concordia's Faculty of Engineering and Computer Science.