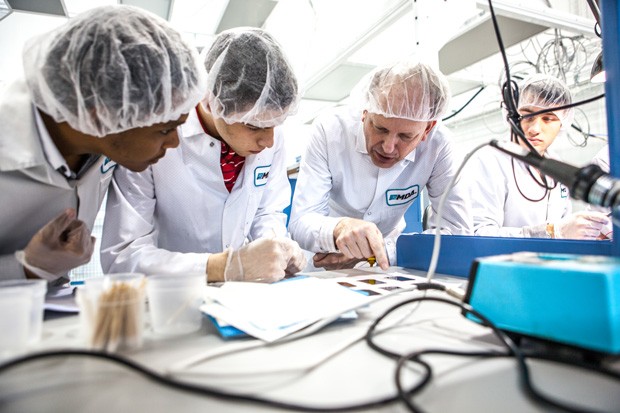 “I’ve been soldering since I was 11, but today my hands are shaking.” Electrical engineering student Rami Kandela is joining solar cells at the state-of-the-art Montreal facilities of MacDonald, Dettwiler and Associates (MDA), a satellite communications company.

Precision is key. Kandela says the cells are “fragile like a Pringles chip” — and worth thousands of dollars.

Last week, Kandela and other members of Space Concordia’s ConSat-2 pitted their skills against those of nine other teams in the second Canadian Satellite Design Challenge. Kandela is the leader of the group working on ConSat-2’s power subsystem, one of six subsystems that comprise Space Concordia’s satellite project.

At MDA, he was accompanied by his teammate Ali Elawad, a mechanical engineering student. The visit was all about learning from professionals in a real-life engineering environment. It culminated in a critical design review, when the teams presented their satellite concepts and were evaluated by a panel of industry experts; the results will be made public in October.

Last year, on September 29, 2012, 18 months of hard work ended in triumph when Concordia's first team, ConSat-1, clinched first place in the Canadian Satellite Design Challenge’s inaugural competition. As a result, they will be launching a satellite into space in 2014.

This year, 10 teams made it into the running. One is a partnership between Montreal’s École Polytechnique and the University of Bologna in Italy, the first time an overseas university has participated in the event.

For Elawad, the ConSat-2 visit to MDA was enormously worthwhile. “The visit opened my eyes to the importance of attention to detail,” he says. “In two days we learned the equivalent of many, many hours of online research, thanks to the feedback of the MDA experts.”

Rami is similarly impressed. “I was absolutely mesmerized by the facility during the tour they gave us,” he says. “Going through the vibration testing labs, and the antenna testing room, and satellite assembly, and all these things.”

With guides like Maarten Meerman, one of MDA’s most senior satellite and space mission designers, Space Concordia got an inside view of an extraordinarily demanding industry.

The students need to learn to be careful, Meerman says. “This stuff has to last in space for 20 years. It takes a steady hand and lots of practice.”

“The Canadian Satellite Design Challenge is intended to give students hands-on experience and mentorship from industry leaders,” said Larry Reeves, the competition’s manager. “We are extremely grateful to MDA for opening up its world-class spacecraft integration facilities to us, and for making their experts available to mentor the students.”