‘Take pride in your accomplishments’ 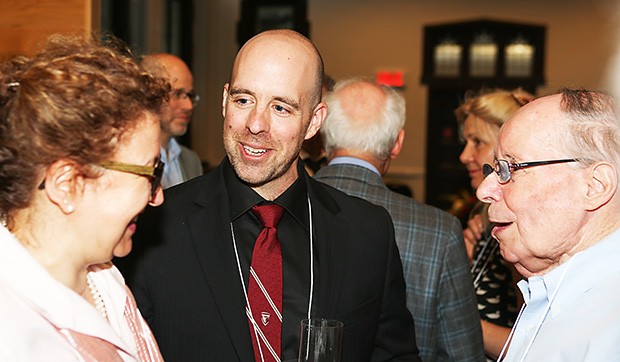 It was an evening to celebrate academic leadership, major accomplishments, exciting initiatives and, above all, Faculty members’ continued commitment to Concordia.

The 2015 Provost’s Celebration began with a few words from Benoit-Antoine Bacon, provost and vice-president of Academic Affairs, who thanked everyone in attendance for recognizing the newest members of the Provost’s Circle of Distinction, the winner of this year’s Academic Leadership Award and the current cohort of Provost’s Fellows.

“It is truly one of the best parts of my job to be able to recognize and honour the outstanding work of our faculty members,” he said, addressing the packed conference room. “Take pride in your accomplishments and know that Concordia will continue to support you in your work.”

Concordia’s 2015 Academic Leadership Award was presented to Radu Grigore Zmeureanu, the associate dean of Student Academic Services in the Faculty of Engineering and Computer Science (ENCS).

Zmeureanu joined the university as an assistant professor in 1987, the same year he received his Concordia PhD. Over almost three decades at Concordia, he has filled a number of important leadership roles, including associate chair of the Department of Building and Civil and Environment Engineering (BCEE); director of the undergraduate program; chair of the departmental curriculum development committee; director of the department’s Co-op program; and chair of its recruitment program. 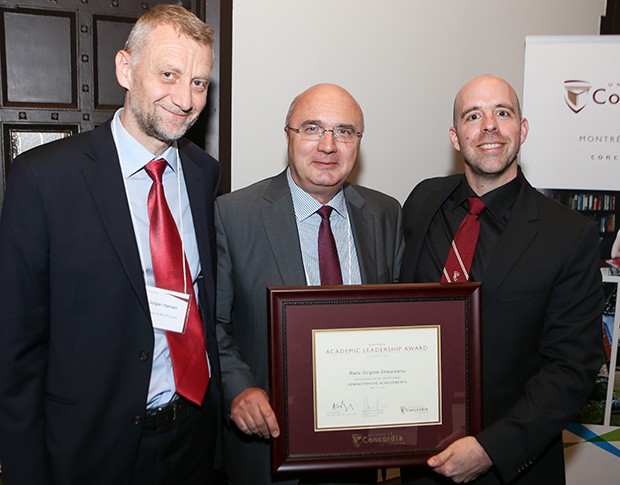 Zmeureanu’s leadership in his current role particularly impressed the award’s advisory committee. They noted, in particular, his initiative to revise and transform the Faculty's readmission policy. “It has significantly reduced the number of students in failed standing applying for readmission and increased the success rate of those readmitted,” the provost explained.

The committee also recognized his strong commitment to students and community, as well as his ability to maintain a highly productive research agenda. Zmeureanu has represented his Faculty with the Ordre des ingénieurs du Québec for the last 15 years, and in the course of his career, has attracted more than $14M in grants and research contracts.

Amir Asif, dean of ENCS, stated in his letter of nomination that Zmeureanu has been exceptional in the delivery of his services, and serves as a role model for other members of the dean’s team. “He is a great leader and has contributed uniquely to the Faculty of Engineering and Computer Science.”

This year, Benoit-Antoine Bacon welcomed six new members to the Provost’s Circle of Distinction. Created in 2009, the honour recognizes faculty members and librarians who earned professional recognition from external groups and organizations, such as the Royal Society of Canada.

“Concordia takes great pride in the achievements of the members of the Circle,” Bacon said before introducing the newest inductees. “It’s so important that outstanding achievements that are recognized externally also be recognized internally.”

Vincent Martin, a professor in the Department of Biology, is a leader in the field of synthetic biology. His research focuses on engineering microbial systems, particularly yeast, to produce metabolites with important pharmaceutical applications. Martin held a Canada Research Chair Tier 2 in Microbial Genomics and Engineering for two terms and is now Concordia University Research Chair. He was selected as an inaugural Member of the Royal Society of Canada’s College of New Scholars, Artists and Scientists in 2014.

Eleanor Bond, an associate professor in the Department of Studio Arts, was a recipient of the 2015 Queen Elizabeth II Diamond Jubilee Medal. The commemorative medal serves to honour significant contributions and achievements by Canadians. As an artist, Bond has an international reputation for her distinctive paintings and drawings, which use the tradition of landscape painting to provoke discussions around social, ecological, political and economic themes. A teacher since 1988, Bond has exhibited internationally since 1987 — with recent shows in Tokyo, Seoul, Hamilton and Berlin.

Steven High, a professor in the Department of History and Canada Research Chair in Oral History, has garnered four book prizes among other awards for his research. He has also received dozens of external research grants including the multi-year, $1 million SSHRC-funded Community-University Research Alliance Grant. High is co-director of the Centre for Oral History and Digital Storytelling. In 2014, he was elected as an inaugural member of the Royal Society of Canada’s College of New Scholars, Artists and Scientists.

Hoi Dick Ng, a professor in the Department of Mechanical and Industrial Engineering, was recently named a Fellow of the Canadian Society of Mechanical Engineers (FCSME). The title is awarded to individuals who have attained excellence in mechanical engineering and contributed to the progress of their profession and of society. The recipient of the Petro Canada Young Innovator Award in 2007 for his research into alternative fuels, Ng has secured numerous major research grants, including a Natural Sciences and Engineering Research Council of Canada (NSERC) Discovery grant and an NSERC Engage grant.

Erin Manning, an associate professor in the Department of Studio Arts, was named an inaugural member of the Royal Society of Canada’s College of New Scholars, Artists and Scientists in 2014. One of the Faculty of Fine Arts’ most prolific research-creation scholars, Manning has been recognized nationally and internationally for her leadership in exploring the intersections of movement, perception and sensation through large-scale art installation and publications. The Concordia University Research Chair in Relational Art and Philosophy, Manning directs the Sense Lab, which brings together an international network of artists and academics.

Michel Magnan, a professor in the Department of Accountancy in the John Molson School of Business (JMSB), was inducted as a Fellow of the Royal Society of Canada last year. He became a fellow chartered professional accountant (FCPA) in 1998, and is the only professor on Canada’s Accounting Standards Board. Currently the Stephen A. Jarislowsky Chair in Corporate Governance, he has served as associate dean of External Affairs and as associate dean of the Masters and Graduate Diploma Programs at JMSB. He was among the first to do research on executive compensation in Canada. 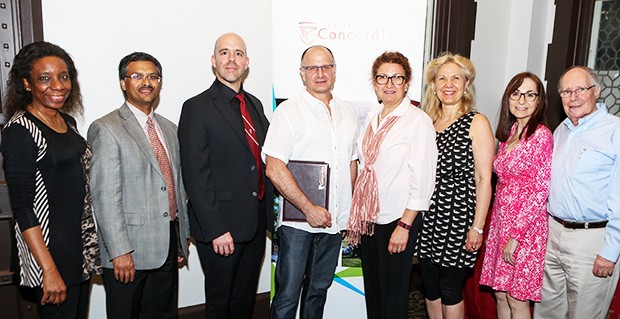 Created in 2012, Concordia’s Provost Fellows program aims to tap into the specific expertise of talented and dedicated faculty members, and provide them with an opportunity to get involved in leadership roles related to specific portfolios. At the celebration, Lisa Ostiguy, the deputy provost introduced the current cohort of Fellows.

“The program has grown from two fellows in its first year to 11 this year, and for good reason,” said Ostiguy. “We are making great strides in these specific areas, and would like to thank you for contributing your talents to improving Concordia’s offering.”

Read about this year’s winner of the President’s Excellence in Teaching Awards.