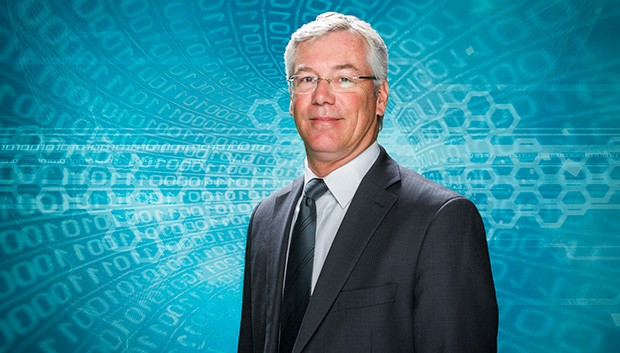 Six months on, Marc Denoncourt — Concordia’s chief information officer (CIO) — is settling into his new role as president of the Board of Directors for the Réseau d’informations scientifiques du Québec (RISQ).

The RISQ is a non-profit organization that provides high capacity network services to all research and education institutions in Quebec, including Concordia. In fact, the organization introduced internet network connectivity to the province about 25 years ago.

“RISQ is really important in terms of sharing information and working on research projects together across the country,” says Denoncourt, who took over as president in November 2014.

That’s because through its private network, the RISQ provides the bandwidth needed for sharing the large data sets often used in these projects, and it connects the data to CANARIE, a Canada-wide network.

For example, if a Concordia student or researcher is collaborating with someone at the University of Toronto, it is through RISQ and CANARIE that they are able to share their findings.

As Denoncourt explains, without this network connectivity and capacity, university researchers would be unable to exchange this large amount of data. The cost of doing so through a commercial network infrastructure would be prohibitively expensive.

“The network services provided by RISQ are mission-critical to all research and education institutions,” says Denoncourt. “For me, it’s an important job to oversee the organization, and it is a good way to contribute not only to Concordia, but to the rest of the industry.”

In addition to working with universities and CEGEPs in Quebec, the RISQ also serves high performance computing centres and connects more than 60 per cent of the province’s school boards.

“We really are everywhere in Quebec,” says Denoncourt. “We service 151 members and partners, including 19 universities and 48 CEGEPs — we’re part of the research and education network, and it is really in line with what Concordia is doing.”

Prior to his presidential appointment in November, Denoncourt spent four years as a RISQ board committee member. The board itself is made up of representatives from universities and CEGEPs; its main role is to oversee the organization in terms of its vision, its financial position, and its strategic direction.

As president, Denoncourt coordinates the board and its subcommittees. January saw the launch of an initiative to define the RISQ’s strategic plan. A three-year plan will be presented to the board in June.

A veteran in the field of information technology, Denoncourt holds a bachelor degree in Computer Science (BScA) and master's degree in Information Systems (MScA) from the Université du Québec à Montréal (UQAM).

As CIO at Concordia, his role is to oversee information technology services and technological investment for academic, research and administrative purposes. He deals with everything from Wi-Fi and financial systems to major technology projects like the Webster Library Transformation and the university-wide Student Information System.

“Nowadays, technology is everywhere, and for universities in particular, it’s critical,” says Denoncourt. “Not just for students — but for staff and faculty as well.”

Find out more about Marc Denoncourt’s role as chief information officer at Concordia.