The Bachelor — then and now

For men these days, single is sexy. To be a bachelor is to be manly, successful and an object of desire. Not so at the turn of the 20th century.

Bachelors of a Different Sort, the new book by Concordia University art history professor John Potvin, shows that bachelors once held an ambivalent, uncomfortable and sometimes unfriendly position in society. That was especially true for “bachelors of a different sort” — queer men. 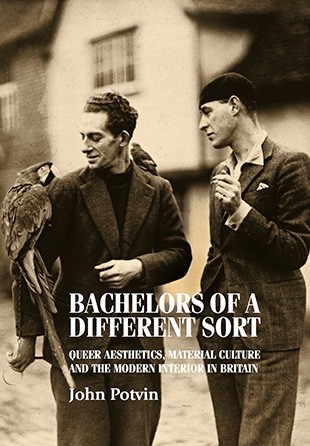 Bachelors of a Different Sort gives readers an inside look at turn-of-the century bachelorhood by offering case studies of the private lives and homes of several prominent gay bachelors living in Britain. | Photo courtesy of Manchester University Press

“Back then, bachelorhood was viewed with contempt and suspicion. That’s because it was a wilful contradiction of traditional patriarchal ideals, where lineage was upheld as a stabilizing familial, economic and political force,” explains Potvin, who argues that queer men were defined by seven modern deadly sins: queerness, idolatry, askesis (or severe self-discipline), decadence, the decorative, glamour and artifice.

The book gives readers an inside look at turn-of-the century bachelorhood by offering case studies of the private lives and homes of several prominent gay bachelors living in Britain. Potvin explores a largely unseen side of queer sexuality by showing how these bachelors used interior design to set themselves apart from the stifling constraints of the hetero-patriarchy that surrounded them.

Bachelors of a Different Sort begins with the Criminal Law Amendment Act from 1885, commonly known as the Labouchere Amendment, which made “gross indecency” — that is, homosexuality — a crime punishable by imprisonment, something Oscar Wilde famously experienced first-hand.

It still resonates today: just think of the current anti-gay climate in Russia and Uganda. “When laws are enforced that establish and restrict the limits of love, sex, public visibility and private space, one forms a different and unique relationship to the home. And one often feels the need to act out, even if only through interior design,” says Potvin, who is also the graduate program director for the PhD in humanities offered through Concordia’s Centre for Interdisciplinary Studies in Society and Culture.

By examining the domestic interiors of men such as Wilde, Noël Coward and Cecil Beaton, Potvin shows how queer men created their own expressions of safety, comfort and productivity within the inner sanctum of hearth and home.

Although conditions for the present-day bachelor have much improved, Potvin is careful to point out that, “Even in these times of so-called tolerance, it’s frighteningly easy to take queer experiences for granted. We are constantly challenged to negotiate a place in society, often against a backdrop of outright hostility.”

By examining the lives of bachelors of a different sort, Potvin gives readers reason to reflect on complacent attitudes towards gay life in modern society.

Partners in research: Research for Bachelors of a Different Sort was supported by grants from the Social Sciences and Humanities Research Council of Canada.


Learn more about Bachelors of a Different Sort: Queer Aesthetics, Material Culture and the Modern Interior in Britain, published by Manchester University Press.