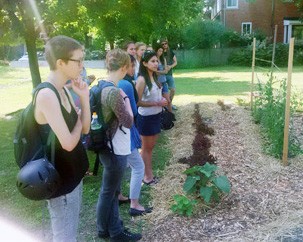 The exchange students from Fulda University of Applied Sciences stopped by the Loyola Campus garden in August. | Photo by Marilla Steuter-Martin

For many, the idea of travelling 5,800 kilometres to stand in the middle of a compost site wouldn’t spark much enthusiasm. But for the six students at Concordia on exchange from the Fulda University of Applied Sciences in Fulda, Germany, spending their summer vacation learning about sustainability was a dream come true.

In the first year of the exchange’s pilot project, students from Concordia’s Loyola College for Diversity and Sustainability travelled to Germany to learn about sustainable practices and partner with other international students to author a joint report.

Concordia returned the favour this year by hosting the Fulda students for a three-week intensive process, where they had the opportunity to experience some hands-on learning.

Rosemarie Schade, principal of the Loyola College for Diversity and Sustainability and an associate professor in Concordia’s Department of History, explains that she wanted to facilitate experiential learning by taking the students on trips.

“They actually get to go and visit some of the things they read about,” Schade says.

During their stay, the students visited Compost Montréal, La Ruche d’Art (Art Hive) in St. Henri district and the Loyola Campus garden, where they discussed the challenges of urban agriculture projects in a city the size of Montreal.

They also connected with a number of on- and off-campus groups, such as Sustainable Concordia and Incredible Edibles in the Notre-Dame-de-Grâce district. 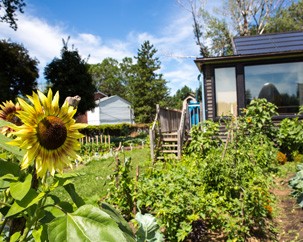 Over the course of the exchange, the visiting students partnered with Concordia undergraduates minoring in sustainability to participate in workshops and co-write the final report.

Schade says that these collaborations resulted in some fascinating discussions, considering the students all come from diverse academic backgrounds.

“On the surface, it sounds kind of crazy to put together artists and scientists, but, actually, it’s amazing how well they can work on a set theme,” she says. “It’s quite phenomenal. I think that interdisciplinary work is going to be the way that most people will be working in the future, because problems such as sustainability are so complicated that there cannot be just one approach to them.”

Theresa Schmiedl, a visiting graduate studying international food business and consumer studies at Fulda University, says that the opportunity to gain an international perspective was the first thing that drew her to the program.

“It’s really interesting to go into the communities,” she says. “In Germany, managing waste, for example, is based on the governmental federal level, and, here, a lot more of those sustainability projects are in communities.”

Schmiedl finds that since her field has an international focus, getting the chance to gain knowledge into how sustainability is approached outside of Germany has been an invaluable experience.

“I was interested in how a different country or culture tries to support sustainability and how the term sustainability was defined here in Canada and in Montreal,” she says.

Woehrstein’s most memorable moment was the day the group visited the composting site.

“Here in Montreal, people have the opportunity to bring their waste to a place where it’s transformed into compost, and, in Germany, we don’t have that — so that was new to us.”

Learn more about the Loyola College for Diversity and Sustainability.