The university is cultivating designers, developers and digital artists
|
By Lucas Wisenthal

On May 5, Alicia Fortier, BFA 14, reported for her first day of work at Ubisoft Montreal, a Mile End-based game developer known for titles like Assassin’s Creed, Splinter Cell and Watch Dogs, among others.

As a design intern — a position she will hold until August 29 — Fortier is focused on user interface for games that, at the moment, she is not allowed to name. But the job, she says, is exciting. And now, more than ever, she’s certain she wants to pursue it as a career.

“I’m working with a lot of talented people,” Fortier says. “Being here has taught me that I really love being a game designer.” 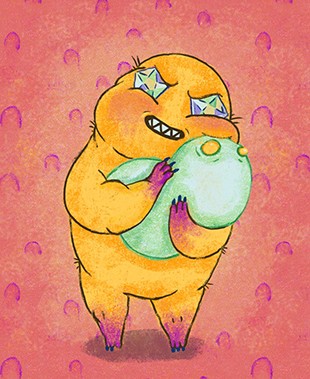 As Fortier explains, Morphlers is premised around a collection of creatures whose only goal is to consume one another in order to absorb their opponents’ powers, amassing points in the process. Two other members of the team behind it, Eric Robitaille and Gabrielle Lafrance, were selected to take part in Ubisoft’s Academia Summer School, which began April 30 and will end June 20. The program is focused on turning Book Brawl into a full game.

To Jonathan Lessard, an assistant professor in the Department of Design and Computation Arts, those sorts of accomplishments reflect the university’s capacity for innovation. Though it was competing against schools with dedicated game-design programs, Concordia took advantage of its strengths in design to deliver a distinctive product.

“I picked a team that I knew had what it takes to produce something original, and that’s what happened,” Lessard says. “Rather than trying to compete on a AAA level” — game industry speak for big-budget projects — “we took an indie gaming approach.”

That strategy paid off. As followers of Montreal’s prolific video game scene know, Concordia is central to indie gaming in the city. This year alone, the university’s Technoculture, Art and Games (TAG) Research Centre held four game jams — all-night sessions in which developers of all stripes create completely original games.

And right now, TAG is hosting Critical Hit, a game-development incubator that began June 9 and will conclude August 15. Over the course of the summer, 16 media artists, designers and programmers — five Concordia students and one graduate among them — will take part in a series of game jams before developing some of the projects that emerge from them.

The gamers will work under the mentorship of figures from the gaming scene in Montreal and beyond, including Lynn Hughes, an associate professor in the Department of Studio Arts and TAG’s director, and Lessard himself.

It’s the sort of process that the gaming aficionado encourages.

“It fosters team spirit and teaches participants to work together, and it generates a lot of ideas for games,” he says. “It gives participants the opportunity to gain real experience and build their portfolios.”

Lessard is also developing titles of his own as part of a research-creation project. But unlike conventional games, his are built around the idea of speaking to a computerized character in natural language.

“That’s the only gameplay,” he says. “I intend to present these prototypes in indie gaming venues.”

Meanwhile, TAG recently welcomed Heather Kelley, a leading figure in video games, as its Visiting Game Designer for 2014. Kelley — whom Inc. magazine named one of the five most powerful women in gaming in 2013 — has created next-generation console games and co-curated groundbreaking exhibits like 2012’s Joue le jeu/Play Along at Paris’ la Gaîté Lyrique. She also founded Perfect Plum, a start-up that builds software focused on aesthetic and sensory experiences.

Kelley is delivering an eight-week course on game design throughout May and June.

“She’s played a big role in the indie gaming scene in Montreal,” Lessard says. “She has a lot to offer us.”

Lessard appreciates the university’s strong ties to the city’s video game community and the opportunities it has opened up for students. It’s an organic relationship, he says, and one he hopes will continue to grow.

“There’s kind of an indie spirit about Concordia in general. That’s definitely our niche in terms of gaming — and it’s yielded great things.”

Check out what Concordia researchers discovered about how gamers conceal their gender online.