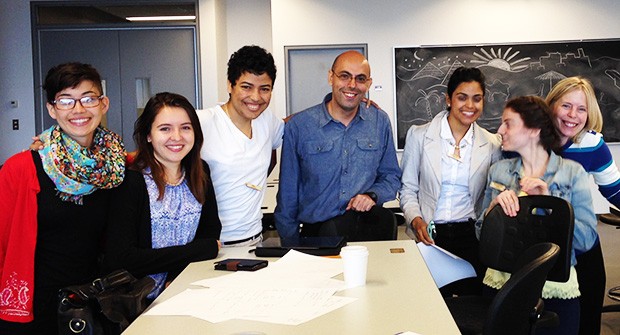 Three of Concordia’s multidisciplinary research centres welcomed a group of students from around the world this past week.

From June 8 to 13, the first annual Summer Research Institute provided 18 students from Canada, the United States and Hong Kong with the opportunity to explore Concordia’s state-of-the-art facilities — including Hexagram-Concordia, the Centre for Oral History and Digital Storytelling (COHDS) and the PERFORM Centre — and engage with some of its leading faculty members.

The initiative’s theme, Digital Practices in Media Arts, Oral History and Preventive Health, served as the basis for the week’s full schedule.

Organized by the School of Graduate Studies, the Summer Research Institute was originally proposed by Luca Caminati, an associate professor in the Department of Film Studies, as a  means of showcasing the university’s cutting-edge facilities and drawing top-tier international students.

“We felt we needed to put more emphasis on Concordia as a place for graduate research,” Caminati says. “Among many other initiatives, we decided to put together this summer institute.”

The institute’s activities began on Monday with a trip to Hexagram-Concordia in the Engineering Computer Science and Visual Arts Integrated Complex, where the group took in presentations and hands-on workshops on design, 3D printing and prototyping technologies.

The first part of Tuesday was spent at the COHDS in the J.W. McConnell Library Building. The group learned about place-based storytelling and participated in a workshop on audio documentary production. Later, the students went on an audio walk along the Lachine Canal. Developed by the COHDS, the walk featured stories from people who have lived and worked in the area.

Wednesday saw the group tour the PERFORM Centre on the Loyola Campus, where it took part in a discussion on globalization and watched a presentation on the impact of digital technology on preventive health.

On Thursday, the students participated in a competition based on the ideas they learned at each research centre.

As COHDS co-director Ronald Rudin, a professor in the Department of History, explains, the Summer Research Institute was an ideal way to introduce current and future students to Concordia’s high-tech research centres.

“The university has expertise in digital technology, and the common thread between the three centres is that they’re all involved one way or another with technology.”

Among those who took part in the week’s activities was Junesse Christiaans, a Toronto native who is set to begin a master’s in Educational Studies at Concordia in September.

“If I had not taken part in this series, I don’t think I would have known these centres existed,” she says. “I feel lucky I was introduced to them before I started my master’s.”

Haidee Thanda, who hails from San Francisco, Calif., is completing her final year of a master’s in Educational Technology. Participating in the Summer Research Institute encouraged her to see her own studies through a multidisciplinary lens.

“At COHDS, I learned about geo-mapping and telling stories,” she says. “Traditionally, I associate history with reading narratives online, but at the centre I saw a website that was very interactive about the Acadian people in New Brunswick.”

The design and development process — which the centre outlined for the group — compelled Thanda.

“As an educational technologist, I was thinking about how that was a great use of technology.”

Given the Summer Research Institute’s success, Caminati says the university is already planning to expand the initiative next year.