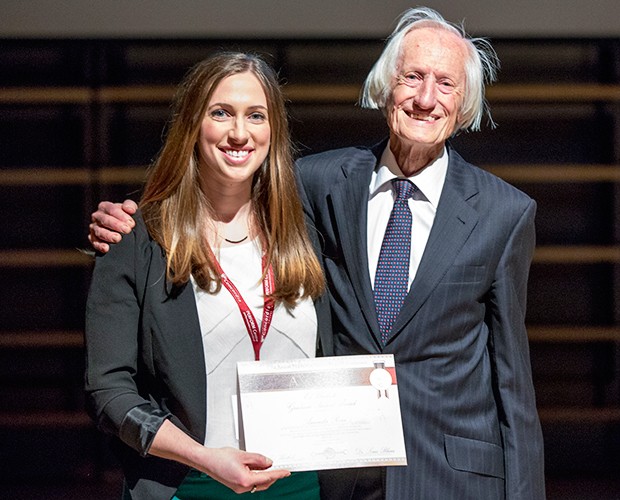 Concordia PhD candidate Amanda Rossi has received the first-ever Ed Whitlock Award for her research into the impact of physical activity and high blood pressure on the development of cardiovascular disease.

Rossi’s award presentation occurred at the inaugural PERFORM Centre Research Conference. The day-long event drew 300 top researchers from Europe and across North America for a series of lectures on the theme of “Physical Activity and Brain Functions.”

The award was established after Ed Whitlock, a record-breaking 83-year-old marathon runner, declined an honorarium from the university for speaking about healthy aging in last year’s Thinking Out Loud conversations.

Whitlock believes that amateur athletes — including himself — should not profit financially from sports, even indirectly.

“I think a lot of problems with today's sports stem from money and professionalism,” he said. “I told them they could use the money for university purposes, and they came up with the idea of a scholarship.”

Concordia matched Whitlock’s contribution, and established an accolade in his name for an outstanding student whose research explores preventive health.

As Graham Carr, vice-president of Research and Graduate Studies, noted, Whitlock’s gift “shows that one of the virtues that comes with age is generosity.”

“Ed is a great example of how exercise and physical activity can help maintain health throughout the aging process,” she said. “What he's achieved is definitely inspiring — even for people at a young age who are less involved in physical activity.”

For Rossi, a member of Concordia’s Individualized Program, the Ed Whitlock Award represents more than support for her own studies.

“Hopefully it's great encouragement for the students who come after me.”

Four PERFORM Centre postdoctoral and doctoral fellows were also announced in the ceremony at Oscar Peterson Concert Hall on the Loyola Campus.

Anne-Sophie Brazeau, one of the new fellows, is a postdoc whose research focuses on developing intervention programs for young adults suffering from or at risk of chronic diseases.

Caroline Fitzpatrick is a former Fulbright recipient whose work examines how children’s environments influence their academic performance and health.

Dmitri Sitnikov, the fourth fellow, is a clinical microbiologist who studies how chemical entities act as biomarkers of behavioural manifestations.

He described the conference as “a unique occasion to hear the most internationally renowned speakers in the field of neurosciences of exercises.”

“This shows the unprecedented potential of PERFORM to gain recognition as an important hub for cutting-edge ideas in scientific research in preventive health,” Bherer said.

Find out how exercise can keep your mind young.