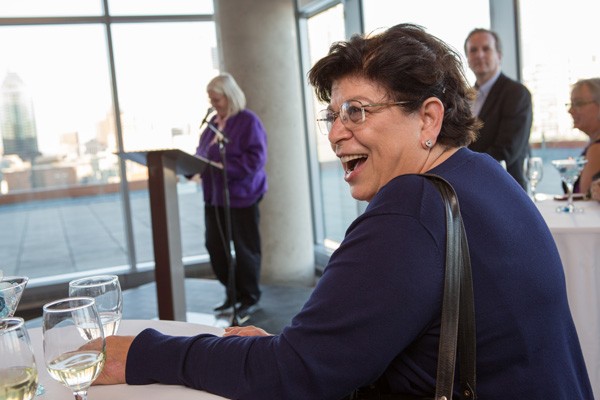 Maria Peluso is toasted by friends and colleagues at a party in her honour. Photo by Concordia University

After 21 years as president of the Concordia University Part-Time Faculty Association (CUPFA), it’s time to pass the torch: Maria Peluso has stepped down.

She does not, however, have any intention of retiring, nor of leaving the institution she holds so dear. Peluso plans to return to the classroom and has taken a seat on the Board of Governors.

At the official CUPFA send-off on October 2, Political Science Professor Marcel Danis remarked that he first met Peluso when she was his student: she came to Concordia in 1979, and obtained her Graduate Diploma in Community Politics and the Law two years later.

Some time after that, they faced each other across the bargaining table as union and university representatives. In his toast to Peluso, Danis asserted that she was always on time, always well prepared — and never too shy to point out when others were not.

In addition to her graduate diploma, Peluso holds an MA in Public Policy and Public Administration from Concordia. She also attended York University (BA 75), the University of Windsor (ADR Certificate 98) and Queen’s University (Industrial Relations Certificate 00).

A union president, a member of the community

When she was CUPFA’s president, Peluso saw herself as the leader of both an association and a union.

The distinction is important to her: she notes that the relationship between the two “is not always adversarial in much the same way that Concordia serves both as a community that belongs to all of us, as well an employer.”

She sat on the Inter-Union Council and Senate, as well as on countless advisory and evaluation committees.

An educator and a mentor

Peluso began teaching at Concordia’ Department of Political Science in 1981, soon after her graduation. According to Arpi Hamalian, an associate professor in the Department of Education, her evaluations are glowing.

Hamalian describes Peluso as “a mentor who pays caring attention to each and every student. She encourages them to overcome any and all personal hurdles to stay the course and move forward towards graduate studies and productive careers.”

Peluso takes the time to build relationships and bring people together: she has worked to create a network of people who share her vision of social justice.

Father John Walsh, a retired priest who taught at the university, knows Peluso through her work with the Canadian Council of Christians and Jews.

“Everyone says I’m a feminist, but it’s not just about feminism,” says Peluso. For her, it’s a movement dedicated to freedom: she believes that no one should have to face oppression.

She has championed women’s causes throughout her career, specifically through her commitment to the Montreal Business and Professional Women’s Club (since 1986), Shield of Athena, the Montreal Women’s Centre and Chez Doris, to name a few.

And … a killer cook

The one thing that comes up over and over again about Peluso is her exceptional talent in the kitchen.

Stories of Peluso’s commitment, perseverance and passion are always paired with reminiscences of great food.

Peter Stoett, a professor in the Department of Political Science, describes her as “a one-of-a-kind fighter and a straight-shooter who also cooks impossibly delicious meals.”

Geneviève Rail, principal of Concordia’s Simone de Beauvoir Institute — where Peluso taught some courses — is looking forward to having Peluso back in the classroom. Rail sees her contribution as an important part of the feminist learning experience at Concordia.

Enza De Cubellis, BA (women’s studies) 02, is director of administration and public affairs in Concordia’s Office of the Vice-President, Development and External Relations, and Secretary-General. She’s anxious to have Peluso back in the classroom, too; she says she’s been trying to register for her classes for years.

Yet Peluso is also looking forward to playing a different role. As well as sitting on the university’s Board of Governors, she plans to put more time into her poetry writing and readings. She is looking forward to working with the Liberal Party in the next federal election, with an eye to fighting for causes close to her heart: veterans’ rights, heritage issues and any possible referendum on an independent Quebec.

Retirement is the last thing Peluso has in mind. This move — characteristically — is simply a change of focus.

David Douglas took over as CUPFA president on September 1, 2013.